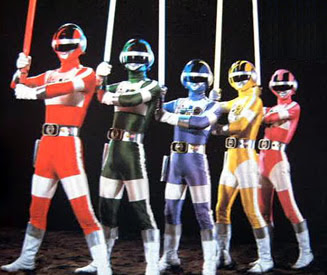 Many thought Jetman was the first Super Sentai series that Haim Saban wanted to adapt, this 1986 LA Times article confirms that Saban planned to adapt Bioman. There were rumors for the last couple of years that Saban wanted to adapt Bioman. The article says: "Bio-Man and his squad were in danger. This time, however, their fate wasn't resting in the hands of Zadar, the evil half-human, half-robot thug who wants to conquer the world..." Also: "He has lofty ideals, and I wish him luck in reaching them. But there is a substantial difference in being a producer of music and being a producer of entire television programs," said Karyn Ulman, vice president of music for Taft Entertainment." In 1986 I was four, I was eleven when Mighty Morphin Power Rangers first aired, wonder what the world would be like if Power Rangers had already had its 20th anniversary in 2006? And 25th would be 2011 I suppose. I remember them saying for MMPR that Fox Kids wasn't sure about the violence, that is probably what hindered the series in 1986.

i think there is a rumor that 4 sentai are selected to be adapted into power rangers: bioman, jetman, turboranger??? and forget what is the last one. they say zyuranger is finally selected since it is the newest (at that time). not sure if the rumor is true.

I think it would have made more sense if Bioman was the original PR instead of Zyuranger. I don't find the dinosaur theme representative of all Sentai. They should of stuck with Bioman. Then the Power Rangers we see everywhere would be generic future warriors instead of randomly dinosaur-based futuristic warriors, and everything would make sense.

Bioman WAS adapted, as the article says. It just never aired because it was rejected by all the networks. Paul Schrier, more than a decade ago, confirmed seeing it back when MMPR started. Footage from the first episode of Bioman is in the unaired version of "Day of the Dumpster" as an intentional reference to the previous failed attempt by Haim to bring Sentai over.

I wish bioman was done in 1980 so they could adapt it in 1981 time force would be the perfect aniversy season for this.