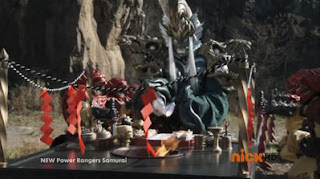 Serrator lets go ash in an island that makes the inhabitants fear. The Rangers head to the island and see the scared people. They split up into groups of two. Kevin and Emily spot a scared boy and find out it is the ash. Mike and Antonio are confronted by Serrator, Dayu faces Kevin and Emily and Jayden and Mia bump into Deker. They are transform and fight them. Serrator put Mike and Antonio on the ropes. Serrator mentions the end of swords. A new Nighlok is working on laser blasters with the Moogers. Cody returns to the Shiba House with a present. 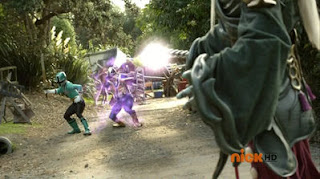 Deker tells Jayden that he is weak and no longer worth fighting. Deker fights with another weapon and beats up Jayden. Jayden is depressed and Mia tries to cheering him up but he says what Deker said was true so he leave son his own. Deker refuses to fight Jayden so Dayu does so. Mia arrives to protect Jayden, saying they made a promise to each other to fight for each other and a promise is not a weakness. 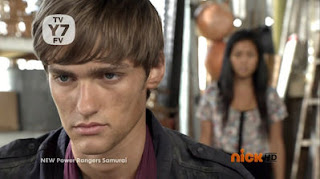 Jayden and Mia morph and fight. The other four arrive and they are surrounded by Moogers with Blasters. Antonio is taken down and Jii arrives with the Bullzooka. Jayden goes Super and fights the Nighlok with the Bullzooka. The monster goes big and they call for the Bull Megazord and Lightzord. The Lightzord forms with the zords and go mega. 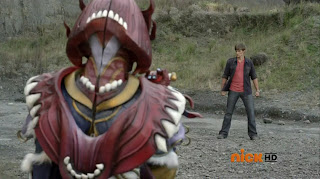 Big Moogers come with a huge blaster.  Jayden uses the Bullzooka and SPin Sword to take down the Moogers. The big monsters use the cannon to blast the Megazords. Bull Megazord uses their own blasters and take down the four Moogers. Antonio takes down the monster's blaster. The Rangers destroy the monster. Deker tells Jayden, "This is how you fight now? With a blaster? I dare you. You don't have the guts." Deker dares him to shoot him, Jayden shoots the ashes and fire behind Deker and the fear leaves the island and the people are without ashes. 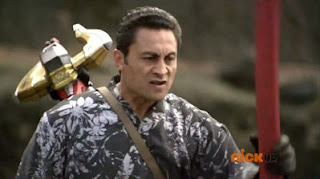 Jayden cocks the Bullzooka and Deker is about to fight. Serrator stops them and says he has bigger plans. He says it should be a clash of titans and he calls upon Spitfangs and that Papryox. They form the Clawzord-Samurai combo and fight them. (It seems this is two episodes combined since the Rangers went out of the zords and wnet back in) Jayden goes Shogun mode inside the zord and makes the Shogun Spear with the Bullzooka. 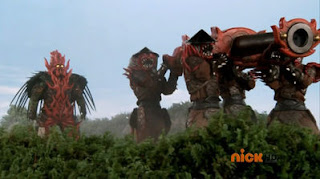 Everyone says it is 'sweet.' They make the Gigazord and destroy the Papryox. Later, Mia tells Jayden that Deker was wrong. Jayden says "If they only knew." Mike calls Jii 'old dude,' and he is insulted. Mike backpedels and says he is 'retro cool.' Everyone teases Mike and leaves him. Mike slips on fish and falls into crates. Everyone laughs. 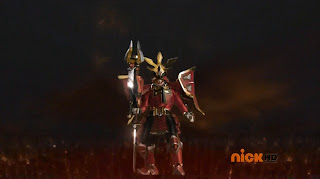 Episode Review:
Great Ep. I like some of the lines. I like how Jayden lets Deker get to him.

It's definitely a two-in-one episode, I checked. Namely, episodes 38 and 39 of Shinkenger. The former is the source of the rifle squad, this week's monster, the introduction of the Bullzooka, and the first mecha battle. The second supplies the main plot: Serrator using ashes to affect people's minds, Jayden and Deker's fight (in which Deker suggests Jayden's gone soft) and the battle with the Papyrox.

There's a site, www.rovang.org/shinkenger.htm , that is very good for comparing the U.S. and original versions of the episodes (or at least determining which episode what footage came from).