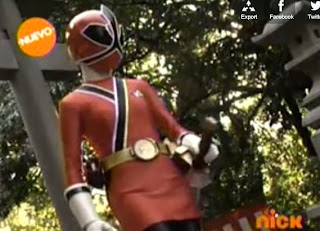 If you don't want to be spoiled, don't press the link. FuryDiamond at RangerCrew Blog has posted summaries about the episodes that have aired on Nickeldeon Latin America. Picture above also from RangerCrew Blog. The episodes have been encoded and are available at:

Encoding Videos: http://www.shadowrangers.net/
They were encoded by Z-Rider of Shadowrangers.net
But of course they are in Spanish. The only videos available now are A Crack In The World (Una grieta en el mundo), Stroke Of Fate (Golpe del destino), The Great Duel (El Gran Duelo), Evil Reborn (Maldad renacida), and The Sealing Symbol (El Simblio del Sello). Fight Fire with Fire is not available at this site. I do not know where else to get it. The last episode Samurai Forever has not aired yet.

My pal Jay at MorphinLegacy is not crazy about the new episodes airing first in Latin America but not in the United States. Some believe it has to do with Nick LA, that it was their decision. Kimberly Crossman, the actress that played Lauren, said on Twitter that her 'secret is out.' Also these pictures of a television with the final episode thanks to Raz from Rangerboard and Angel Eduardo Jr:

Spoilers in Black:
Skull does return but in the final episode. Jayden uses Shogun mode outside of a zord. The Rangers are unmorphed inside the zords cockpit like in Shinkenger.
Posted by Lavender Ranger at 6:45 PM

In France as we will have the end before the USA.