UPDATED Same day 1PM EST
Jonatrhan Himmelfarb (@JonFromIsrael) uploaded pictures to his Twitter account of Power Rangers costumes. Jon says they are official. Some look bootleg. These costumes are for kids. They are not for Halloween but an Israeli Jewish holiday called Purim, that commemorates the deliverance of the Jewish people in the ancient Persian Empire from destruction in the wake of a plot by Haman, a story recorded in the Biblical Book of Esther. Customs include drinking wine, wearing of masks and costumes, and public celebration. 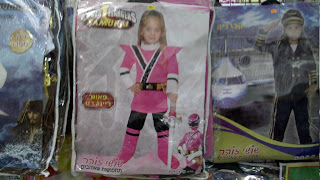 Above is Pink Ranger in Mega Mode which looks super cute, this is not available in the United States. 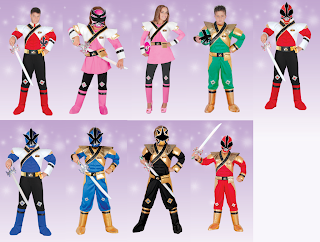 Here are pictures from a website. These are actually official. The man's face on the left looks photoshopped and some parts of the image does too. Jon tells me that they are not doctored. Here we got what looks like Super Mega Red Ranger, Super Mega Pink Ranger and Green Ranger in Mega Mode but his shield, boots and accents are gold, which is not show accurate. On the bottom is Super Mega Blue, Blue Mega mode, Gold Mega Mode and Red Mega Mode. But the mega modes are gold. And Gold Mega's boots are black. None of these costumes are available in the United States or Canada. 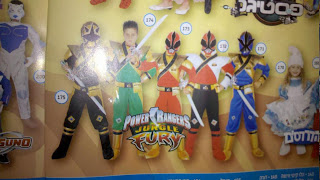 Here in a catalog, there is the inaccurate "Jungle Fury" logo.
﻿
Posted by Lavender Ranger at 9:46 AM