Vote for me in the Power Rangers Welovefine.com T-Shirt Design Contest 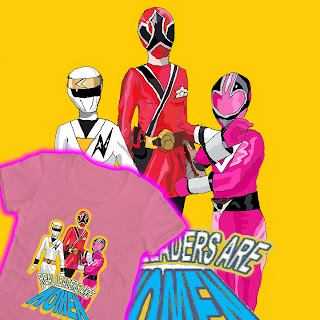 Real Leaders are Women
http://www.welovefine.com/vote.php?id_contest=32&m=gallery#/id_submit=11663
Lauren (Red Samurai Ranger), Jen (Pink Time Force Ranger) and Delphine (White Aquitar Ranger). Not included are Charlie, the Red Ranger of the SPD A-Squad because the team was evil and Taylor/Yellow Wild Force Ranger because it was just for one episode. 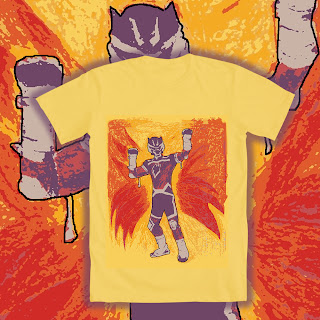 Violet Wolf Ranger
http://www.welovefine.com/vote.php?id_contest=32&m=gallery#/id_submit=11655
I drew this long ago in color pencil, I scanned it and fixed it up in a photo manipulation program. 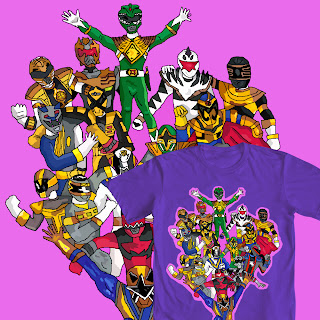 Sixth Rangers:
http://www.welovefine.com/vote.php?id_contest=32&m=gallery#/id_submit=11666
The poses are inspired from a 25th anniversary Super Sentai poster and fixed up with the Sixth Rangers, I omitted Phantom Ranger and Magna Defender because I was mostly following Gokai Silver's Ranger Keys and had to omit him just in case he didn't get adapted but we now know he might. Anyway, in hindsight I should had included them because now its just 16, with them it would have at least been 19 or add the Spirit Rangers and Phantom and make 20.

Posted by Lavender Ranger at 3:55 PM

Neat. I submitted some designs after learning about the contest from this site.

Regrettably I was only able to successfully submit these two designs that are more Sentai than PR influenced. I did send in two Mighty Morphin' specific shirts, but they were rejected on the grounds of double entendre that they felt was too "suggestive". ah well.