Power Rangers Megaforce - He blasted me with Science - Episode Review

Pictures of course thanks to Fury Diamond of Megaforcecast.com 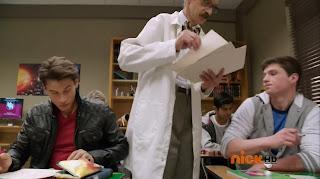 Summary:
The teens take a pop quiz, Mr. Burley plays with a rubix cube. Troy remembers jogging in a cute red hoodie and bumping into Creepox and not engaging in battle. He talks about humans being strong. Mr. Burley has dozed off. Gia finishes her test, puts it on his desk and leaves. School bell rings and all the kids turn int heir tests. Mr. Burley awakes and falls, Noah heps. Gia opens her locker and looks at her morpher. Jake comes by her and freaks her out. He wants to hang with her. Meanwhile, Vrax tells Malkor he wants to study the Rangers. Creepox talks about Troy. Malkor sends Yufo to capture humans. 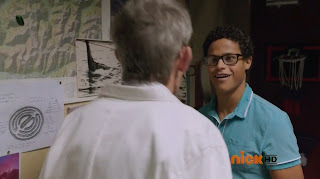 Back at Burley's office, Noah returns him his scarf. Noah notices Cryptozoology, U.F.O.s and other mysteries on his wall, both having an interest in both. Jake takes Gia's backpack and he tells her that he wants to get to know her better. 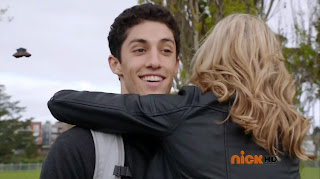 She is about to give him the "it's not you, it's me" conversation when she spots U.F.O.'s and hugs Jake. Jake is over the moon. Gia alerts him of what she sees and grabs her morpher to alert the others. Jake tells him to stop and they can do it on their own. The UFOs kidnap people and the UFOs become one monster. The two morph. We hear a different version of the Megaforce song while they fight Loogies and Yufo. 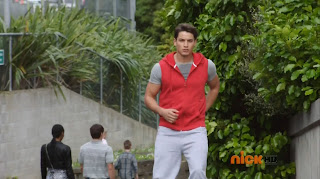 Gia calls Troy and Emma. Troy arrives first. Jake wonders where Noah is. Yufo blasts them down. Emma blasts him and helps the others. They figure out his plot. More Loogies are called. Yufo puts the four down. Blue arrives. Black and Blue exchange some dialogue. Gia tells them 'sorry to spoil the bromance.' I am almost fell on the floor when I heard this. 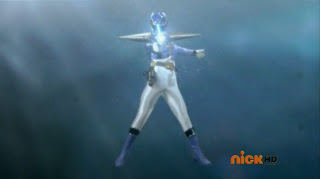 They do a roll call and fight and destroy Yufo. The people are freed. Vrax sends him Zombats to make Yufo grow, he explained to Creepox that he is royalty. The teens freak out but Gosei explains that they can call upon their zords. 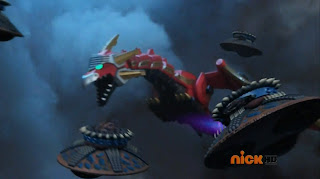 They receive new cards, call them "Gosei Dragon" etc. and transform them into "Gosei Mechazord" for example. The zords blast Yufo down, the Rangers enter them. Malkor wants to learn what helps the Rangers do all this. Yufo releases UFOs to fight them. Jake tries impressing Gia. 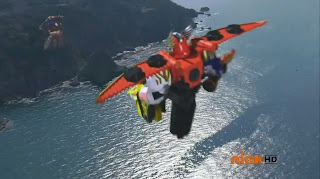 The last UFO becomes Yufo. Gosei tells them to make the Gosei Great Megazord and they clash with the monster. They release the zord heads to punch and kick. They then do the Victory Charge attack to destory the monster. Malkor is really angry. Gosei congrats the teens through their morpher as they are sitting on a bench in their city. We get a quick glimpse of Tensou. They talk about working as a team. Meh. 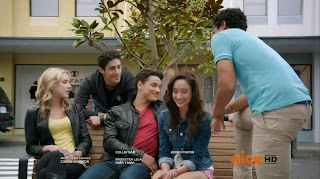 Review:
Pretty good peppy episode even with cheesy lines which are common in the Ranger world (even RPM, yes I said it). It was interesting to hear another Megaforce theme, it kind of sounds like the one we have without the 'go go power rangers' part so maybe it is the original demo. Grnrngr mentioned on Twitter that Mr. Burley reminds him of Professor P. of PRiS and it is true. I liked the Jake and Gia scenes and the BROMANCE mention which I mentioned last week about Jake and Noah. Hilarious. Anyway, good ep. Emma's bio talk is getting a bit tiresome.

Gia is once again the best part of the episode for me. Shes smart enough to finish her science quiz even before Nerd King Noah and gets the best quips. Not to mention the whole "grab the morpher" hug was a fun bit.

I do actually like how Gia is trying to give Jake the "You're a nice guy but I'm just not into you" line, as it feels different (and more real) than the typical, he pines for her and it turns out she liked him all the time routine that we often get on television.

The whole "Troy meets Creepox" flashback thing felt wrong though. Meeting your arch enemy and then just leaving and brushing it off just doesn't work. Meeting in the woods should have been a bigger deal. At the very least he should have told the others, maybe used the flashback footage then.