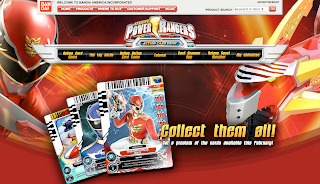 http://www.bandai.com/powerrangers/cards/en/Home
Given that the Power Rangers Megaforce section of Bandai.com is not finished yet, I find it a pleasant surprise that the Action Card Game site is complete, in the sense that almost all the links lead somewhere and it has cool features. The only thing missing is the "My Collection" part of the site but that is forgivable. 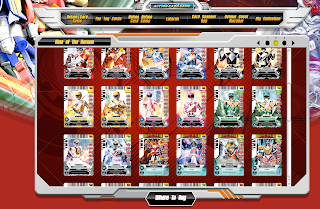 Action Card Game
Under Action Card Game, they show the cards from 'Rise of the Heroes." Presumably when they add more series, there will be tabs. For those that don't know, there is Samurai, Megaforce, MMPR and RPM. Included are Megazords, some zords, Rangers and villains (no villains for MMPR). Missing are the White Ranger's zord and RPM Ranger Gold and Silver. 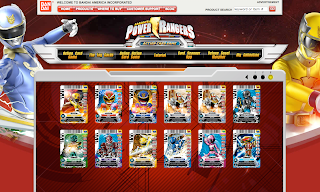 The Toy Cards
"The Toy Cards" shows cards that come with the regular toyline or the Tokyo Vinyls or the Battle Minis Blind Packs. When you click on one, there is an option called "Find which toy this comes with" but it just leads you to the toy section and doesn't tell you which. The list shows all the cards but the toy section doesn't have all the toys. Presumably the cards belong to upcoming toys, probably from the Fall Wave or Series 2 of Minis.

Tutorial
I am horrible at video games and never played card games before. While my best friend for ten years plays role playing games on a regular basis, I do not. The Tutorial is extremely helpful. It does get a bit confusing for me and the card game itself is for kids 6 and up. I see kids of 9 years of age really playing it and kids of 8 and below play it there own way but not following the rules.

Online Game
You can play the game online, which is fun. You can only use one of three decks and they are RPM, Samurai and Megaforce. But you can't use villain cards. My only quarrel is that you can't use MMPR cards nor Villain cards. Up part is that you can use Easy, Medium or Hard and also remove music. It is a great job all in all. There is also the sections of Card Scanner, Deluxe Morpher and My Collection. Card Scanner and Deluxe Morpher just tell you about the products. The "My Collection" section is coming soon.
http://www.bandai.com/powerrangers/cards/en/Home
Posted by Lavender Ranger at 9:29 PM