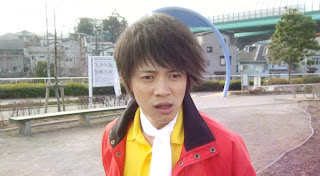 Luna was only hired for one day and she is up for an audition for a director (George Speilburton--maybe a mix of George Lucas, Steven Speilberg and Tim Burton). She speaks English like a bad Japanese prostitute dressed as a girl. Funny enough, there is a Tyrannoranger and Dragonranger Figuarts on his desk. Anyway, Malshina is taking a bubble bath being called by the general in a bus who brings up Dynaman villains. He most study evil organization. Another auditioner acts like a villain in front of Speilburton and then has a soft voice with Luna. She tells Luna she will make it and that she was lazy. The other two see this. 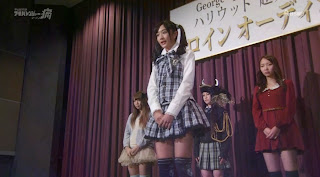 General approaches Akina, he thought her a lot. The others meet with Luna. Akagi thinks Speilburton must be a Sentai fan. We see him playing with the Zyuranger figuarts. Akagi shows Luna a camera with a picture of Tyrannoranger. Luna says it is from the US. They see a logo that says 'Powerful Rangers.' Akagi clears up that they take Sentai footage in America. A bus arrives with four men with baskets on their heads (much like those villains from Dairanger) and a woman in the middle, showing her boobs. Men approach her and take papers and point at Luna. Akagi looks at the picture and it is Yumeria in compromising positions when dressing as villains last year. 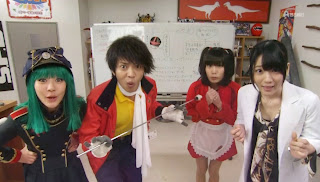 The five turn out to be Malshina and her minions. The men run. Akagi gives Luna her transformation device and they transform. Malshina also transforms. They enter the illusionary world, and two rangers looking like Tyrannoranger and Dragonranger arrive (with America flag banner on their necks and belts) and Zyuranger instrumental plays in the background. Luna says that the Powerful Rangers are the source of Sentai. The two are combating against them and shove them. Malshina uses them to fight the Akibaranger. The Akibaranger teleport away. The Powerful Rangers cheer. 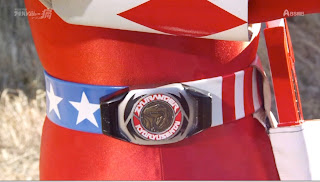 Kozukozu scares them by saying that now Gaoranger is the first Super Sentai series, that it was copied from the 8th Powerful Ranger series. It was called 'Wild Force,' (in this continuation Gaoranger aired in 2001 just like in real life). The company that made Powerful Rangers plan to sue. Akagi gets mad saying that Sentai is Japan's cultural legacy. Lumeria thinks the enemy is responsible for this. Luna looks at them with quizative faces. Luna really believes that Powerful Rangers came first. Akiga thinks that Luna's messed up idea messed up the dillusional world. Lumeria sets the record straight. Lumeria says that in the America it started with Zyuranger. Luna says it isn't what the internet says. (ha ha) 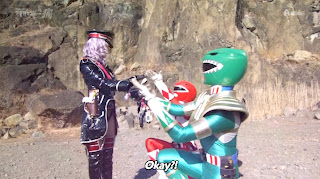 The Powerful Rangers say they don't mind working for Malshina. The new monster arrives and the general explains to Malshina that they look like Sentai but aren't. Meanwhile, Akagi has made a giant board explaining the Sentai/PR history. Luna says she likes their collars. The gang go to a Sentai shop which only seems to have Sentai stuff from after Gaoranger. Akagi talks to a cashier there but he thinks they are crazy, he doesn't remember Zyuranger. All the other stores they go to don't believe them, Luna wonders why they are so desperate. 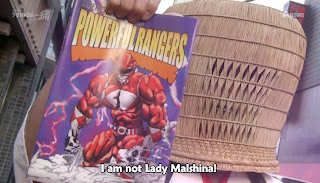 The new monster presents himself to the three, showing them a Powerful Rangers magazine. Luna says she'll work for the PR. The three transform. Akagi appreciates the monster. Luna goes gaga for the Powerful Rangers. The PR call the Akibaranger 'copy cats.' Malshina transforms. Malshina, the monster and PR fight AkibaYellow and AkibaRed. The two references Zyuranger. Dragon and Tyranno beat up Akagi, de-morphing them and beating up their human forms. Powerful Rangers celebrates. Akagi won't give up. Luna asks why they are going so far. They say it is for Sentai and Japan. Akagi explains them the story of the Zyuranger. 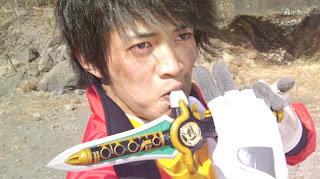 The two come to their senses, getting headaches. Yumeria hands Akagi the Zyusouken and he plays it and the American flags disappear and they speak Japanese and presents themselves as Zyurangers. Zyuranger song plays as they beat up Malshina and the monster. Malshina leaves. Luna wants to fight with them, they give her the Zyuranger Cross, which looks like a Dino Buckler with a Z coin. The others transform and do roll call. The three do a special attack, launching Luna on the monster and call for the Zyuranger Dino Buckler and destroy the monster. KozuKozu shows them that everything pre-Zyu has returned, they celebrate. Luna still wants to use Akibaranger too become a idol. Akina arrives, saying the director went back home and said he would write a script about an unofficial Sentai. She says she won't Luna outdo her. The three say they will do their best. 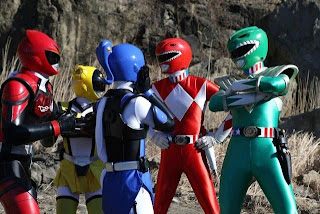 Review:
Some fans complain about the use of 'Powerful Ranger' instead of 'Power Ranger' but it might be a copyright thing but also because it is dealing with their own timeline where Gaoranger is 8th (Wild Force is 10th), then they can take liberties. I like how they are messing up the timeline and facts and giving a shout-out to American fans. It kind of parodies the confusion with Americans, thinking Power Rangers came first and calling Super Sentai as 'Japanese Power Rangers.' ﻿