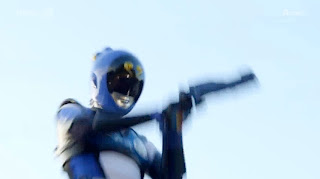 Akagi tells the doc that there is something wrong (Akibaranger being in place of Dairanger). A new monster has pervs freak out when making their dream dvds come true and their clothes become boxes. Akagi tries transforming but fails. The girls make it work with a backup system and Red transforms and fights the monster. The monster has a fast forward remote that makes Red skip a beat. Red finds himself in a loop. The monster makes a truck come out of a sign. Red falls on top of Ryuuranger, he has a case and thinks it is a power but it is potstickers. Ryuuranger is happy to meet AkibaRed, he is a big fan. Ryuuranger's costume is different and he's name is Chinaman, mascot of a restaurant. China Sentai CHinaman was the rumored name in pre-production of Dairanger and they had eyes. 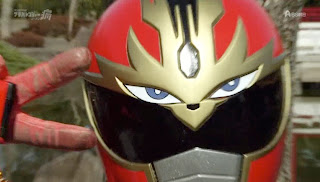 China Red says he is just a mascot. Red snaps out of the delusion after the monster attacks them. Akagi is happy to see Akibaranger merch but the others are concerned. They then go to the karaoke shop and find no Akibaranger songs... there is one that sounds like Dairanger song but it is for Akibaranger. Akagi is sad, he thinks the monster hit Ryuuranger and made him into ChinaRed. They hear the chief singing a song. It was played only once on Dynaman. Akagi says it is dorky. The chief says he will remember it, he doesn't introduce himself because the gils take him out. KozuKozu wonders if destroying the monster will restore everything. 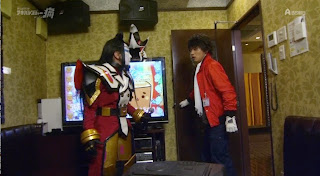 Akagi says he can't do it on his own. Doc says they have to look for a second Blue. Akagi says it will be hard to find someone with blue in their name. Kozukozu wonders if maybe Indigo or Navy. Luna arrives, saying that Akagi is dressed as AkibaRed, she recognizes the show from cable, she is 16. She wants to be an idol. She is offered to become Akibaranger, she thinks it is a remake series. She wants to know who is directing the pilot. She says some director names from Sentai. Monster arrives and Red and Blue transform. Red says that her hairstyle is different. The new grunts freak out the two. In time, Lemuria appears and transforms into Yellow, with new hair. 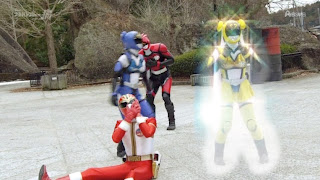 The three fight the monster. They call the penultimate powers... the cannon. Blue calls it something else. They fire it at the monster and he is destroyed. Chinaman comes up to Red and gives them a good job but he hasn't been fixed. Kibaranger comes in and kicks them down. He has a Akibaranger logo on his chest. To be continued.﻿ 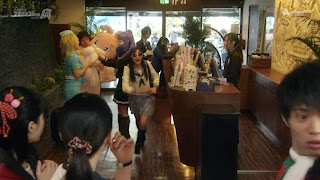 Review:
Even though "Chinaman" is a bit racist, well it wouldn't be Akibaranger 2. Interesting loopholes and plot points. It seems everything is working like TV, when needed Luna appears. When need, Lumeria appears. The Dairanger-Akibaranger switch does seem interesting.
Posted by Lavender Ranger at 8:38 PM