Thanks @SilurianRanger for the find. If you don't want to be spoiled, don't read the rest and click 'read more.'

This has been found on Instagram, it is not known if it is for real or not. I personally think is real. I think it is really exciting! It is box art for what seems to be a Red Ranger Cycle but without the toy. It has the Super Megaforce logo and Gokai Red.

I can't believe I have to explain why I keep this as a spoiler. Not everyone watches Super Sentai, some Power Ranger fans like being surprised. And why is a big deal that box art doesn't get leaked? Believe or not, toy companies like keeping these things under wraps--until it is revealed on the toy fair showcase or the toy shelves. Why? So other toy companies don't steal their ideas. Or also if the boxart or product changes. You know that products do change color details or other details and even the boxart (look at the Power Rangers Megaforce Hot Wheels). They rather avoid it but it does happen. 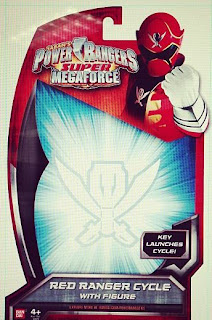 I noticed two pointy sword points (ha ha) above the M and E that look like the pirate symbol. 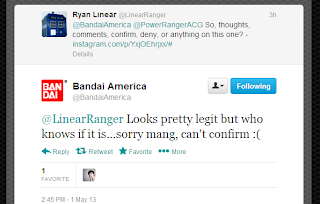 "Looks pretty legit but who know if it is... sorry mang, can't confirm."

Posted by Lavender Ranger at 6:18 PM

How can there be "spoilers" in box art? Obviously someone wasn't wearing their "thinking cap" when writing this

The spoilers I think are for those who don't watch Sentai.
Also it was probably put up as a tease for the fans to see.