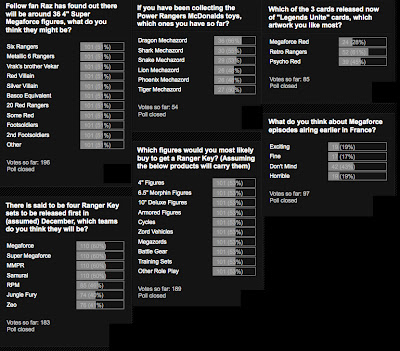 Someone ruined most of these polls by wasting their time and vote for all of these repeatedly to make all the options the same.

Fellow fan Raz has found out there will be around 36 4" Super Megaforce figures, what do you think they might be?

There is said to be four Ranger Key sets to be released first in (assumed) December, which teams do you think they will be?

If you have been collecting the Power Rangers McDonalds toys, which ones you have so far?

Which figures would you most likely buy to get a Ranger Key? (Assuming the below products will carry them)

Which of the 3 cards released now of "Legends Unite" cards, which artwork you like most?
What do you think about Megaforce episodes airing earlier in France?
Posted by Lavender Ranger at 10:18 PM

Some people shouldn't be allowed on the Internet.

I agree with you, Jonathan. Let me add that some people shouldn't be allowed to teach our young children.

You say that we French, we are not sure if the other products, such as board games or arcade game.