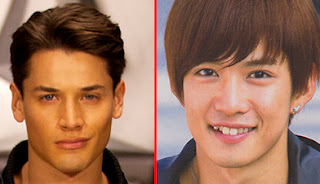 Troy/Alata
Alata was the shortest of the guys and he was skinny and naive but he had some knowledge that conveyed through his young looks. Alata was good at thinking of plans that his teammates couldn't at the spur of the moment. Troy seem to have knowledge out of nowhere and even anticipate a plan before the monster was even introduced. Troy was mysterious and we didn't know much about him while Alata was more of a open book. Alata is cheery and fun while Troy is more emotionless. 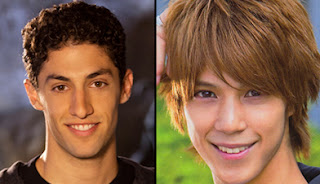 Jake/Agri
Jake is much more goofier and funnier than Agri. Jake and Agri are both stronger than the Blues. They are more brute strength compared to the Blues but they are not exactly buff guys. Jake has a crush on Yellow in the beginning while Agri is the brother of his Yellow. 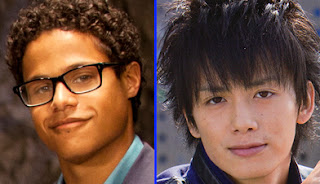 Noah/Hyde
Both are smart guys but Noah is more of a stereotypical nerd, he is into sci-fi stuff. Hyde is an intellectual but also a fighter. He did have troubles with Agri's axe but not exactly 'nerdy' in the traditional sense. Hyde had the burden of his partner dying trying to protect him. Noah is best friends with Jake. 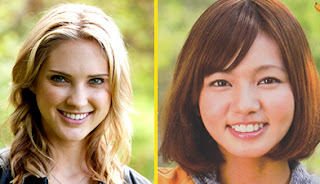 Gia/Moune
Moune is a tomboy but sunny and cheery. Gia likes to have a 'bad girl' image. She is much more reserved, cool and collected than Moune. Both like to handle problems on their own. Both can be stubborn at times. Moune's brother is Agri while Jake had a crush on Gia. 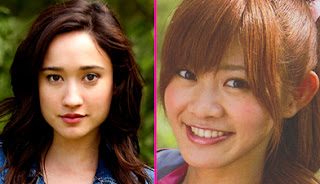 Emma/Eri
Emma is sort of a tomboy, as she likes to BMX and be outside. Eri is more of a girly girl, sweet and caring. Emma and Eri both care about the environment. Eri and Alata have been partners training since they were kids. Emma doesn't have such a connection with Troy. Eri was much more cheery than Emma. 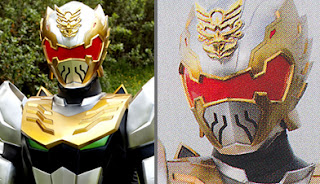 Robo Knight/Gosei Knight
Both are the "Lion Mechazord" and both summoned by the forces of the Earth. Both had to be swayed by the team to care about humans. But their origins are different. Gosei Knight used to belong to Brajias when he was a Gosei Angel. Robo Knight was summoned by Gosei in Megaforce. Both become evil do to the main villain (except Robo Knight happened in Super Megaforce). Robo Knight became good thanks to Troy and transferred his life force to Orion. In Goseiger, Alata makes Gosei Knight good again and he looses his physical form and becomes the Groundlion during the Legacy War. In Gokaiger vs Goseiger, he got his powers and gave back the Ranger Key powers. After Gokaiger, he gained his powers again. 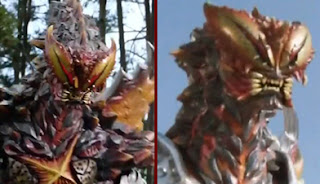 Creepox/Dereputa
Both are brute force brutes that had a thing for destroying the Red Ranger. More differences are in events that happened to them. Dereputa destroyed the Gosei Tower in Goseiger, while Creepox didn't. 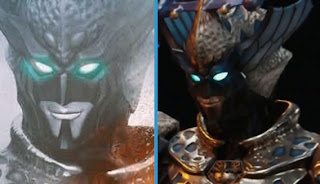 Vrak/Brajira
Brajira had a bigger backstory, he was a Gosei Angel that went wrong. He first poses as part of the Warstar, and then Yuumajuu. He then was destroyed and put back together by Matrinits. He then revealed his true colors as the main bad guy. Vrak on the other side is a prince who first joins the Insectoids and has an armor when he goes out on Earth (but didn't use it in one episode). Both of them were in charge of the grunts for all three villain groups and had bats that made the monsters big. Vrak is the brother of Vekar and son of Empreror Mavro of Super Megaforce. Vrak returns, makes Robo Knight evil and implants drills like Brajira. He is destroyed by Troy/Alata in a similar fashion. 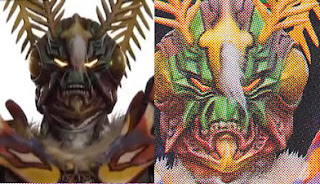 Malkor/Monsu Doreiku
Both were generic figureheads, Malkor had less development than Monsu Doreiku. Monsu Doreiku was defeated early on by the Goseiger. He was kept around in Megaforce and defeated a little bit after Metal Alice was introduced and a few episodes before the season finale. 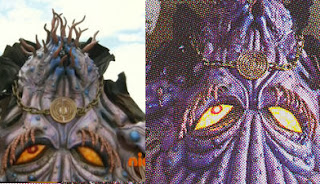 Bigs/Makuin
Makuin is the leader of the Yuumajuu. In Goseiger, he was released by Brajira. In Megaforce, he was labeled a mutant and just seemed to come out of nowhere. He was defeated by the heroes in both versions. 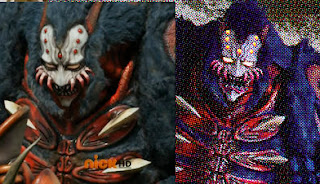 Blue Fur/Kinggon
Both are the muscle of their groups. In Megaforce, he was labeled a mutant and just seemed to come out of nowhere. He was defeated by the heroes in both versions. 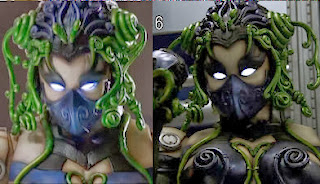 Metal Alice
They both have the same name. In Goseiger, she is part of the robot group and learning about Earth and making research. In Megaforce, she was created by Vrak. Both versions, she made Brajira/Vrak into a cyborg. She was defeated by the heroes. 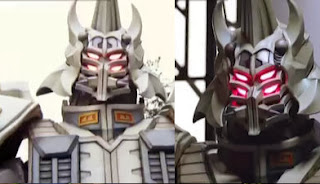 Robogog/Messenger
Robogog was the leader of the robots and just a robot. Messenger was an underling of Vrak and concerned about Vrak. He was a robot but belonged to the royal family. 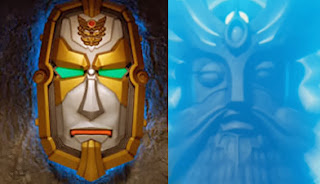 Gosei/Master Head
When we first heard of Gosei and Tensou, fans thought it would be Master Head and Datas. Master Head is the Goseiger's mentors, they would speak to through either Datas or the father of a little boy they were friends with. Gosei is actually just the Gosei Morpher big and to emulate Zordon. He says once that he was a student of Zordon's. Gosei means Earth's Protector in Japan. 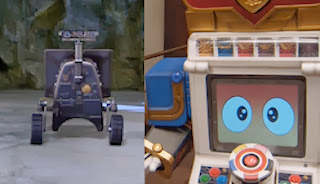 Tensou/Datas
Datas was a big robot that looked like an arcade game, mainly Dice-O---the real life Super Sentai game. So he would become huge like Ninjaman and gain another form and combine with other zords. Datas was completely removed from Megaforce. Other zords were also removed, making some inconsiticiences, especially the big zord combos. Tensou is a completely American invention, that looks likes Wall-E. Tensou means 'Heavenly' in Japan and is part of the title Tensou Sentai Goseiger.
Posted by Lavender Ranger at 12:14 AM