Pictures from PR_Media_Info and Jeffery Hunter and Razzle on Twitter. 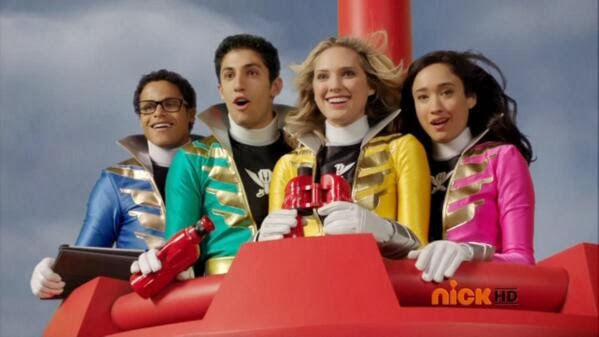 Summary:
Legendary Megazord fights giant Bruisers on jets and call upon the Mystic Dragon and Delta Runner. In the Command Center, Gosei sends them on a mission to "Anamaria." Noah says he has heard of the Lion, Anamaria and the Wild Force Rangers. They leave. We see Red in the cockpit of the Sky Ship, the other four in their Super Mega suits without helmet in the Crow's Nest (thanks Greg). Gia asks Jake what he's looking at, he covers that it was her. Emma notices a turtle shaped cloud, Troy turns the ship, Gia falls on Jake and they find the Anamarium island. 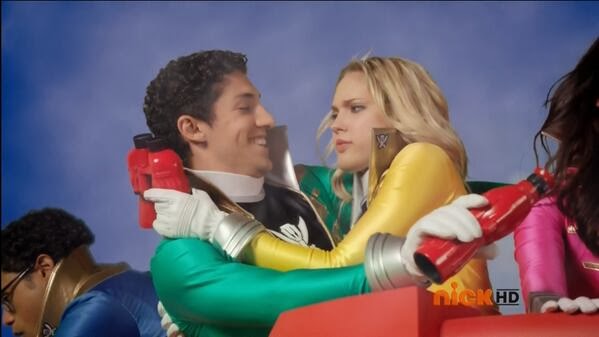 Damaras sends a monster and X-Borgs to them. The ship gets lost in clouds. Emma sees a warship that crashes next to the skyship. They land on the island. The X-Borgs attack and they put their helmets back on and fight them. Noah 'feels' something, they run into the forest. They run around in new US footage as the pirates. Blue senses something, the island quakes. Noah feels like someone is watching them. Pink, Yellow and Blue fall in a trap set up by the X-Borgs. Red and Green stop as they hear something. Red calls Blue, they get a heads up. 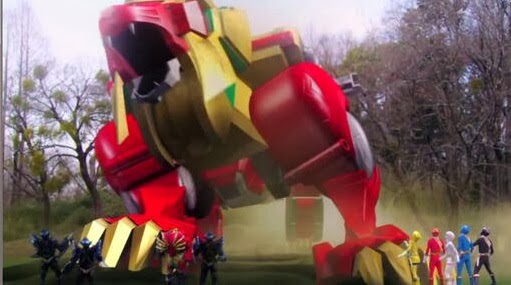 Yellow suggests transforming into Black. The three turn into Black Dino Thunder, Alien and RPM Rangers and fight the X-Borgs. More X-Borgs and Bruisers land and the monster too. The other three return and fight the X-Borgs. They change to Wild Force and do some awesome moves. Lion appears, roars and the Rangers look up at him. Levira tells the minions to go after the Lion. The Lion bats them away, including the Rangers. We see Wild Force Rangers fall to Earth and they crash as Megaforce regular mode. Black and Pink land on a  truck of boxes while the others land on trash. 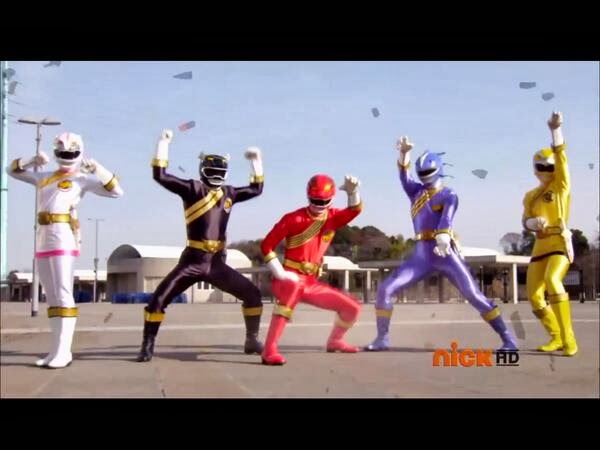 Troy says they have to prove themselves to the lion for Gosei. Red, Blue and Yellow go Mega, Black and Pink hear this and quickly run-morph to Super Mega. They fight the monsters. Noah says he feels the presence of the lion. Jake and Emma figure the X-Borgs abandoned their Lion mission and are after civilians now. They continue fighting X-Borgs and Noah says they are being distracted by the lion. They transform into Wild Force yet again! We see their helmets morph. 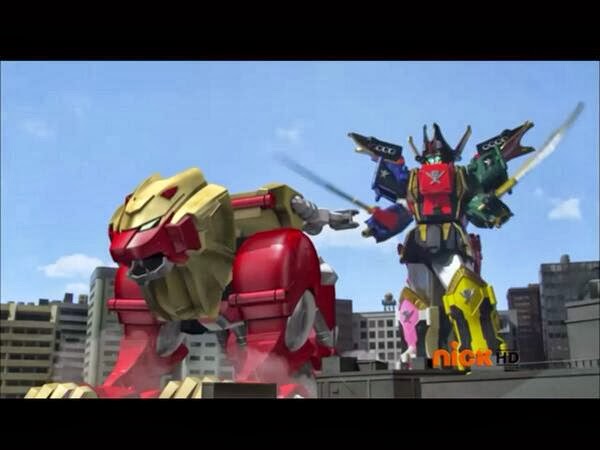 They fight with different Wild Force attacks, they call for the combined weapons Jungle Sword and do the Jungle Slash attack. They become Super Mega again and do Super Mega Blast with their Blasters. The monster then grows. They form the Legendary Megazord. The Bruisers block them so they can't move. Jake senses the Lion Zord. Their Wild Force keys glow. They loosen the grip. Red Lion Zord lowers from the island and slashes the monster. Megazord jumps on the Lion Zord and they form "Legendary Wild Force Megazord." They slash the villains. 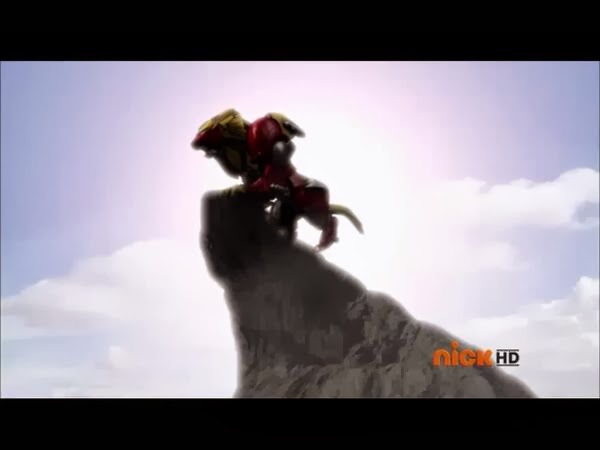 The monster comes towards them, they conduct the final strike, mega roar and destroys the monster. Tensou celebrates that they did it by spinning in circles. Gosei says they couldn't find a more powerful island. The Rangers wave goodbye to the Lion on their skyship from Amaria. Jake says he hopes the Lion doesn't want to stay on the ship because they would have to get a big liter box. 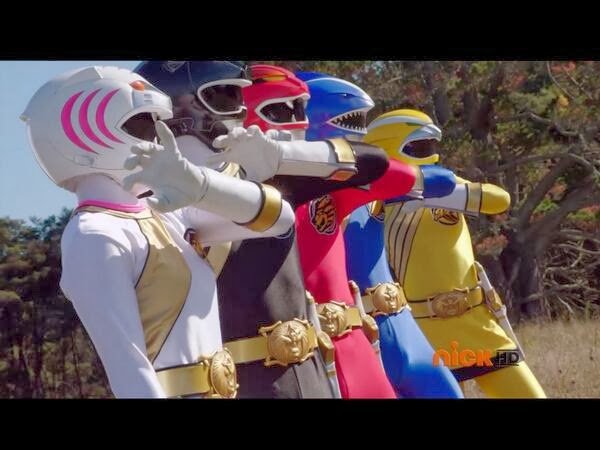 Review:
Clever use of ep 3 and 8 of Gokaiger. So the all Black change we saw in the opening sequence is indeed used in this episode. No White Ranger change from Gokaiger. And no Turboranger and Jetman, even though we do see Turboranger (1989 Super Sentai) briefly when the rangers fall (Pink is obvious). Good to see the original footage for Wild Force change, with some great fighting and movement. Also good that Noah did some research and knew about the Wild Force story. Interesting that the Gokaiger became Jetman and flew off the island, while these rangers just fell as Wild Force and became Megaforce. Also constantly fighting X-Borgs was also exhausting, it just takes from the story, obvious padding for time. The double Wild Force morph was a bit tiring. 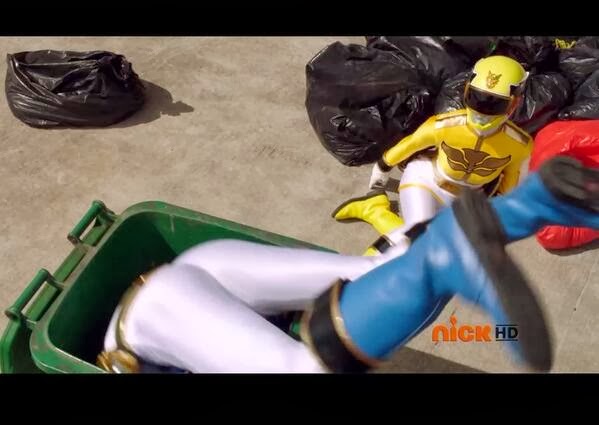 It would had been nice for them to become something else on the island like Turbo or MMPR. Overall a decent episode but without Cole from Wild Force (like the Gokaiger episode had Takeru/GaoRed telling them how to tame the Lion) or any other 'padding,' this episode looses heart and overall character development. No creativity was put into the changes as well. Even as great as the original Wild Force fighting footage was, it would had been nice to see them morph into something else. At least not SPD! People are complaining of the last three eps that the Rangers become SPD but that is because the footage from different eps have been mixed. ﻿
Posted by Lavender Ranger at 12:30 PM

Another thing I noticed was that they changed into the past Black Rangers and then the scene shifted back to Troy and Jake. I can't remember, did we actually get to see the Gokaigers fight in that scene?

well i didnt like this episode because of lack of explaining, where was princess shayla, and the messing up the island name. Thats was major mistake. Too me, i thinking, this who season, just going to be rushed, because of lack of episodes, and alot should have been explained. and added more camero to the season, since they using the past rangers powers.

The top of the ship the Rangers were standing in is called a "crows nest".

Drunken Lemur, no they became white, so that was cut out because of White Swan, Big One and Gao White (which would be her 3rd appearance!)

Grinders are foot soldiers in RPM but in Megaforce 2 they're called Bruisers, not Grinders

Vini, you try writing a summary with a 8 month year old in your arm.

One thing that I really liked was James Gaylyn (Col. Mason Truman) voiced the monster of the day and the bruiser noises kinda sounded like the ones the grinders make. Though did anyone notice that Andrew Gray(Troy) is only in the first scene of the episode.