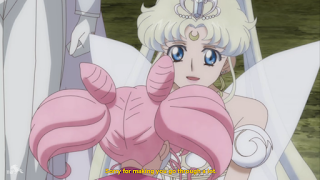 Episode Summary:
Sailor Moon strikes Death Phantom and there is a flash of a light and everyone except for Moon are outside of the castle. They fear what happened to her. Tuxedo Mask's hands glow and he disappears. Neo Queen Serenity rises from her slumber bed. She walks around where the others (future Senshi) are sleeping and approaches the King and kisses him. King hologram disappears from them. King wakes up and he and the Queen emerge from the palace. Chibi Moon goes to hug her. Queen says her awakening woke her up. Chibi Usa apologizes to her, that she couldn't protect the planet and Pluto died. Queen says it wasn't her fault and she grew up because of it. Her body healed and she is fine now. Queen apologizes to the Senshi. She promises Pluto will be safe and she thanks her. Pluto's body glows and flies up into the palace. 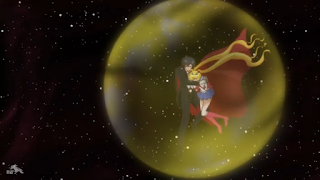 Queen says she lost her power of being a Senshi. Venus asks what happen to Tuxedo Kamen and Salor Moon. King says they were blown to the real planet of Nemesis. Queen says Chibi-Moon is the only one that can go and use the Space Time Key to seal Death Phantom. Chibi-Usa says she wants to be a true Senshi and will fight. Queen makes a smaller rod and gives it to her. Chibi-Usa holds up the key, it glows and she teleports. Queen shakes her head to the Senshi's request to join them, saying it has to be the three of them (perhaps from her own experience). 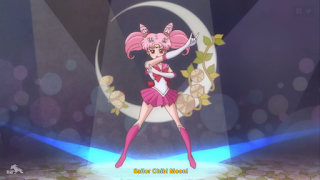 Moon awakens in a bubble in Tuxedo's arms. Nemesis blasts win at them. Moon wonders if the Silver Crystal should even exist. Mamoru says he was born to be there for her. She says she can only activate her power near him, they become one. They kiss and she glows. They have infinite power. Something glows between them and it is Chibi-Moon. She faces Death Phantom and does a speech (In the name of the future Moon). Moon has her wand as well and gives Chibi-Usa an empowering speech. They do the Moon Princess Halation at the same time and strike Nemesis. He moans. Chibi-Usa thinks of Pluto. The planet cracks and explodes. Everything is quiet, the wands and brooches also crack and dissipate. The cosmos is quiet. 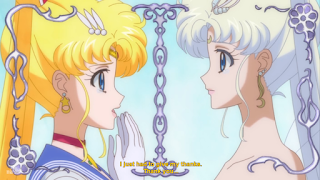 The evil crystals on Earth melt away. The Senshi watch. Queen restores her kingdom, everyone awakens. Queen says it was Sailor Moon, Tuxedo Mask and Chibi-Moon. She grants them new Planet Powers. Queen has to go back to the Crystal Palace, she can't meet her old self. She sends her a new compact and Cosmic Power. Everyone awakens Usagi in the Time Door and she realizes the new brooch. Chibi-Usa will guide them instead of Pluto. Usagi says she guess she can't meet her future self, it would change history. She wants to see her. Queen turns around and runs towards her. They thank each other. Usagi wants to say so much. The other Senshi meet their future selves and Luna and Artemis. The past group go through the door. Usagi awakes in her present bed. She thinks it was a dream. 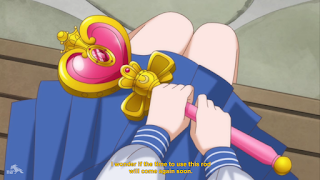 Chibi-Usa opens her door. Usagi and her go to school, Usagi thinks she has a lot of stuff. Chibi-Usa says she has to return to the 30th century. Usagi runs back home, saying she forgot something. Chibi-Usa aplogizes for being mean. Usagi cries in her pillow. Chibi-Usa thinks she annoyed her but Usagi says she didn't annoy her. They cry and hug. Usagi says it will be lonely without her. They return to the spot where Mamoru and Usagi kissed and Chibi-Usa arrived. Mamoru gives her the Tuxedo Kamen puppet. Luna P blinks. The time portal opens. Chibi Usa gives her the Heart Moon Rod. Chibi-Usa leaves. Usagi cries. Mamoru says they will see her again, as she is their daughter. Usagi wonders if she will use the Heart Moon Rod. They think about the future. Mamoru and Usagi kiss. Luna P falls on Mamoru's head. Chibi-Usa arrives and older. She gives them a letter, saying they will train her. 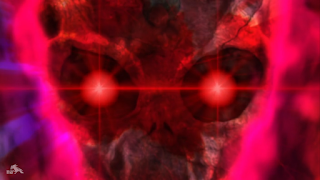 Episode Review:
I sure missed Chibi-Usa, I didn't like Black Lady in this version, she came out way more annoying. I do wish that the Senshi had different costumes in the future. Given that in the original Anime, the creators didn't have new outfits yet but now that 20 years have passed, you'd think they'd bee in Eternal modes or something. I wish we saw the Planet power sticks instead of the same costumes when they got the power ups. It was a good ep. I actually do want it to continue. This arc was better than the last, there was more characterization and better writing.
Posted by Lavender Ranger at 8:11 PM