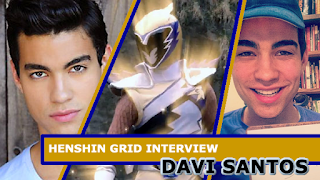 I had the rare instance to do another interview with a Ranger. Here is my written interview with Davi Santos I traded with him via e-mail. He was very understanding and a great guy to answer my questions. Not only my questions but my grandnephew Jaiden's.

L.R.: What was your first acting experience?
D.S.: A short film with Alex Flores when we were about 13 about self-harm. We had a lot of prosthetics on our arms. We joke about the project today because it never came out.
L.R.: When did you get the 'acting bug' or first felt you wanted to be an actor? Also same about writing? What came first acting or writing?
D.S.: The last year of drama club before budget cuts in Elementary school, I was the lead of the school play. There was no experience like it, and I knew I was in love. Started journaling at 12, never stopped. I suppose the stories started in middle school when we were prompted with creative writing assignments. The style leaked into my personal writing. 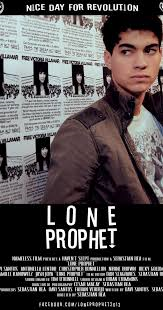 L.R.: On Lone Prophet, you co-wrote, produced and starred as Dante, how did that project come along and how was that experience?
D.S.: I teamed up with then SUNY Purchase Film student Sebastian Rea to write and produce a docu-fictional film that challenged the opponents of the Dream Act by telling an intimate story. We were revved up by governmentally sanctioned injustice that was happening to our friends and loved ones. We were teenagers and we didn't have a budget so we drew our guerilla-do-it-yourself-production values from director Robert Rodriguez's book (Rebel Without a Crew). It took four years to complete, and we learned innumerable lessons about filmmaking, made great relationships, felt positive about the work we were doing cinematically and socially, made lots and lots of technical mistakes, but we were proud of the passion driven first time feature experiment that we followed through.
For more check out Loneprophet.com
L.R.: Do you like to wear different hats like writing, acting, producing, editing?
D.S.: Not necessarily at the same time, but I love wearing different hats. Each one informs the other, and satisfies another dimension of expression.
L.R.: You were on my older sister's favorite show "Switched at Birth," she's deaf, did you know Sign Language before then and did you get to meet Katie Leclerc?
D.S.: I worked with Katie on my episode, she was a very personable, polite and talented. My character on the show didn't use sign language. 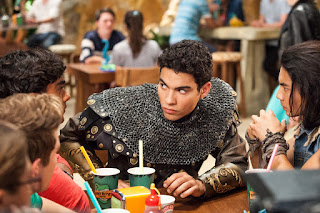 L.R.: You were a child when Power Rangers first aired, what was your first exposure to the show?
D.S.: The TV show when I was about four or five, the toys, bedsheets, Halloween costumes, the works.
L.R.: Since you are a fan of Mighty Morphin, I know you guys know as much as we do for the new reboot movie which is nothing. What are hopes for the movie? Are you looking forward to see it?
D.S.:  I hope the movie is targeted for a slightly older audience, so that it appeals to the ones who were around during the original Mighty Morphin, that it is technically strong, but most of all that at least the story is compelling.
L.R.: Besides Dino Charge, what is your favorite Power Rangers season?
D.S.: Season One although RPM had an interesting apocalyptic twist.
L.R.: Have you had a chance to meet past Ranger actors? If not, which ones do you look forward to meeting?
D.S.: Oddly enough I trained with Hector [David Jr., Mike of Power Rangers Samurai] one evening in Los Angeles and had met John Mark [Loudermilk, Noah of Power Rangers Megaforce] and Ciara [Hanna, Ciara of Megaforce] through mutual friends. I worked with Christina [Masterson, Emma of Megaforce] on a Coke commercial. She was my big sister before production; we met up for coffee one day, and she answered a lot of questions about the living logistics, filming abroad for 8 months.
L.R.: That's great Christina Masterson was happy to help you on tips of surviving (let's say) New Zealand. I've met Christina, she's a sweetheart. Would you ever want to go back to New Zealand?
D.S.:  I loved my experience in New Zealand and I would certainly be happy to return; in fact, I look forward to it.
L.R.: Describe your first impressions and experience on the set of Dino Charge?
D.S.: Since Sir Ivan appears midseason, Rangers had already begun filming and I was excited to start. First day shooting was the medieval flashback in chainmail, riding a horse by a waterfall, and a sword fight in the forest, it was pretty epic.
L.R.: How heavy is it and is it uncomfortable?
D.S.: It was heavy the first two days and then I got used to it. Always a relief to take it off though. 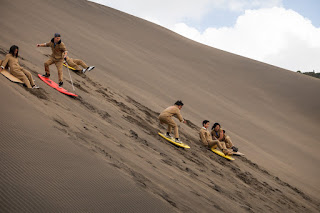 L.R.: What is your favorite episode of Dino Charge so far? I know you can't spoil anything so which one you like from this season?
D.S.: The friendship episode where we went down that giant Sand dune, but eight times with two drones over us and an old-style open air Humvee taking us to the top each time. That was an extraordinary day.
L.R.: Who is your favorite Dino Charge villain so far?
D.S.: Definitely Heckyl. There's a stylistic correlation with Sir Ivan and Ryan [Carter] also does a terrific job playing a madhouse of a fun character.
L.R.: Do any of the other Rangers play pranks on each other?
D.S.: Our days would be long so sometimes we would be pretty slaphappy towards the end, and got a lot of laughs in. The Halloween Episode, we pranked under the ghost sheets, but I cant really disclose here what we all did. 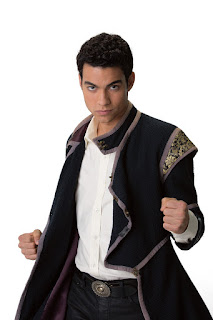 L.R.: What are you planning to do this holiday season?
D.S.: I am taking an exploratory trip to Mexico!
L.R.: Have you ever been in Mexico before?
D.S.: I don't think that one weekend in Tijuana counts.
L.R.: One last question from Lavender Ranger. Are you aware of this "Tan Ranger" debate? Some fans don't like that the American or New Zealand suit is not the same as the Japanese suit, it is like a light tan, which some fans refer to as "Tan." What do you think about it? Did you notice the difference on the set or in post production?
D.S.: Are you referring to the Gold Suit? Yes although the color is better in the Japanese version, the dimensions are stronger in the American/NZ. 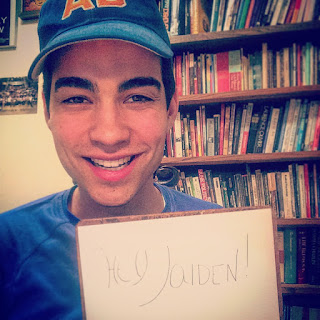 Here are my six year-old grandnephew Jaiden's questions:
Jaiden: Do you have a pet? A goldfish? If not, a puppy?
D.S.: My first pet was a goldfish I did enjoy feeding him when I was little. I would love a puppy, maybe someday.
Jaiden: What is your favorite color?
D.S.: My favorite colors for as long as I can remember, has been red, and I think it has something to do with the show.
Jaiden: Do you like being a superhero or do you want to be an enemy?
D.S.: You can't really be a superhero without being somebody's enemy, that being said I want to be a superhero, but playing an enemy sure is fun.
Jaiden: Do you have a car? What kind?
D.S.: I'm from New York, where you dont need a car, but considering Im moving to Los Angeles, I may have to get one very soon. Going Green can only get one so far in that town. No offense Riley.