Why no Orange Ranger? (And why not Purple more often?) 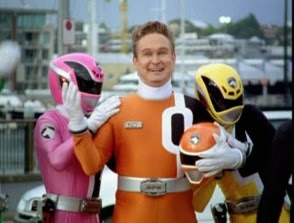 Some fans might not worry about this and to be honest Orange is not my favorite color, but I do like variety and I have wondered through the years as to why there has not been a real Orange Ranger in Super Sentai or Power Rangers. Some might think it is a no-brainer that Orange is just not an appealing color. The closest to an Orange Ranger Power Rangers has gotten to is in SPD, Boom had a dream sequence that he was a ranger--had the number Zero and his helmet was a re-colored MegaYellow/Space Ranger helmet. He later donned his own home-made outfit. 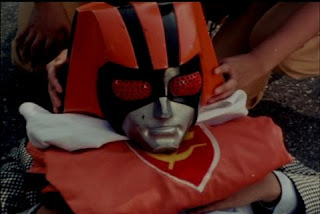 Battle Cossack can be considered an Orange Ranger, he is the only one in Super Sentai history to have a complete orange suit, but he doesn't look like the others. His Ranger Key in Gokaiger is orange. Maybe Toei doesn't think orange melds well in a 5-core team. Lately they have been using orange in suits like Bouken Silver (thin trim), GekiChopper/Rhino Ranegr (trim all over with white and black) and Deka Swan (half of the suit with white and black). But they could have an orange ranger as a sixth ranger, but commonly sixth rangers are white, green or a metallic color. I think it does have to do with aesthetic and popularity, orange--being a mix of red and yellow, just might be popular among kids. But it hasn't stopped them from making orange mecha/zords, but they probably think a full-on warrior can't cut it. 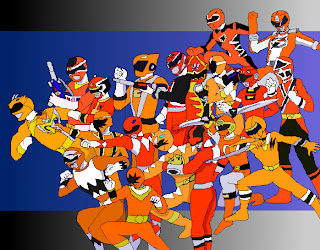 Above I traced over one of Helios' drawing (http://imgur.com/a/uTbbt#0) and only put the Pr teams (with Gosei and Gokai) in orange. I like how it turned out, but some are complaining my red-orange ones look too red. I did Hippo for Gekiranger and Giraffe for Gaoranger, Carrygator for Go-Onger, Shinkenger's symbol is Metal, Playtpus is Gingaman (why? why not!), Drill for Boukenger, Ankylo for Abaranger but other than that, just random drawings. I think I did leopard for Goseiger. Dekaranger, Magiranger, Hurricanger and Goseiger are female. 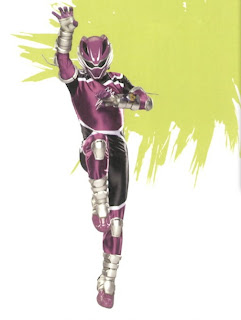 As you can probably already know, I love the color purple (Violet and Lavender count) and since Mighty Morphin Power Rangers in 1993, I wanted a purple ranger and didn't get one until 2007 with Geki Violet. In Jungle Fury, the Wolf Ranger didn't even get mentioned that he was purple. I think it is the same reason as orange, that they might not think it will match ascetically for the core five. I personally think they can switch pink with purple from time to time like they do with white. We have had warriors in purple and close to purple like Wolzard and the Goraijer. 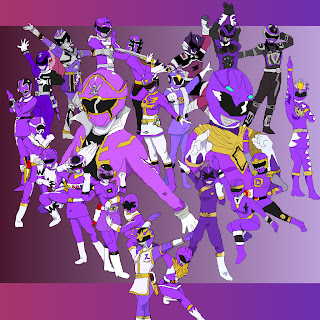 I used Helios' (http://imgur.com/a/uTbbt#) Pink drawing and added some of my own.Dairanger: my own Lavender I made a while ago (Hippogriff)
Zyuranger: Based on an old fanfic, not mine (sky dragon)
Magiranger: my own MagiGlow
Gokaiger: Lavender Ranger (comic on my deviantart)

I also added A-Squad SPD, Geki Violet and Neji/Psycho Purple. I made DekaPurple and GaoPurple male. Gaoranger is based on a bat, an real early idea for GaoSilver for his zord to be a bat. Also, AbareViolet is obviously Paraknuckles. 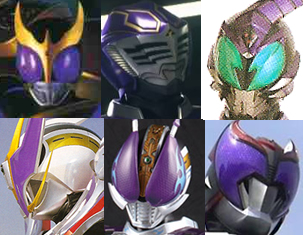 Strange thing is that Kamen Riders has had a lot of purple riders (7) like Ohja (Strike), Sasword, Kamen Rider Den-O (Gun mode), Nega Den-O, one of OOOs forms (Putotyra Combo), one of Kiva's forms (Dogga form) and one of Kuuga's forms (Titan form). 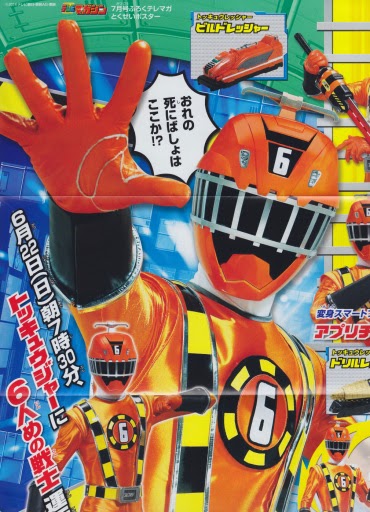 There have also been some violet warriors in the Metal Heroes franchise (including the title character of Janperson and one side warrior each from Blue SWAT and B-Fighter Kabuto), one orange warrior (B-Fighter Min, AKA Lightning Borg, also from B-Fighter Kabuto), and possibly a couple more in the last two series (Kabutack and Robotack).

Actually, there is a reason why there haven't been many orange and purple/violet rangers. Those colors didn't show up well on film for many years. They looked like muted reds and darkened blues respectively when incorporated onto sentai suits when filmed with the level of technology available prior to the turn of the century.

It's similar to why the Incredible Hulk started out gray but quickly turned green. Gray used a lot of ink and came out looking too dark on paper back in the day.

Nowadays, ranger teams are so ingrained with primary colors and then using green, black, and pink to supplement them. They could theoretically make the change to using purple and orange more often but it's just something they're not used to doing. It's hard to teach an old dog new tricks.

MattitudeV1oh, that makes sense but doesn't explain Battle Cossack, but maybe that was their learning curve. Stripe shirts really close together are still un-filmable on tv video.

You're right about the learning curve. It's the same reason why rangers don't have masks with complete facial features ala Battle Fever and the same reason they switched from cloth costumes. There was a ton of trial and error in the early years.

Look at your article. Just compare the orange on Boom to the orange in the Cossack suit. The first look orange while the other is a darker, reddish orange.

MattitudeV1oh i don't think purple would've been hard to do on film since in Back to the Future 3 Clara has a very vibrant purple dress and that was filmed during 1989, back when SS was still figuring stuff out for team formation. i'm pretty sure i've seen orange used in film from way before SS ever started and even during the testing waters. the oompa loompas from Willy Wonka are proof of that.

i defiantly think orange would fit as a good replacement for yellow and purple if they didn't want pink or black that season.
heck in my fan-made season i used red, blue, green, black, pink, and purple as my color scheme with it divided as 4-2 with girls winning that division. the last time they actually mixed it up was Geki and before that was Aba and Hurricanger so who knows when we might another oddball color scheme or mix up of the same colors.

I think, for Orange, at least, it's that it's too similar to Red. In your edited picture, I honestly couldn't even tell that some of those were supposed to be orange, they looked red to me.

Purple, on the other hand, well... let's just say that you weren't the only one who made their own purple ranger when they were younger (I think I used Unicorn as the motif, and had a rapier as her weapon)...

Personally, I've almost always used Orange for Rangers I made for myself. It was the only (or first) color I thought of as a kid so it just stuck.

Example: Much like Boom, I choose Orange for a SPD ranger. Although I did not use 0.

I'm not sure how it would look on film but I like it.

On the Rider side, I tend to use more Greens for a reason. I do like Green though.

But I guess it's also how people see Purple as a color.

Lastly, I like your pictures and ideas. I also choose metal for Shinkenger. I just choose Silver for that since there was already a Gold.

(Which is a third thing I tend to do with Rangers. Mostly when there's a lot of Aux Zords.)