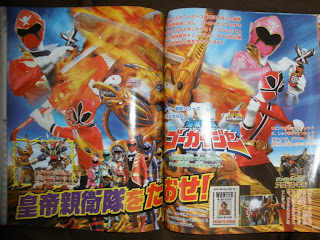 When it comes to the two Shinken Red keys, I don't think Toei wants that much of 'poking holes,' like looking too much into logic.  I think its just for fun. The point of the Hime Shinken Red I see realistically in Toei's stand-point is just to show off the first female red ranger, regardless that she has the same powers of her male counterpart. I don't think we will ever see Gokai Red, Gokai Blue, Gokai Green or Gokai Silver use the Hime Shinken Red key. I think the highlight of the keys is exactly whats going to happen in Ep 41---Shinken Red and Hime Shinken Red AT THE SAME TIME which we have never seen before. I think that is the main reason they made the two keys. Because plenty of people have been asking since Hime Shinken Red had been revealed to have a key to what is the point if she has the same powers as the male Shinekn Red and that the female Gokaiger can use the male key.

Now as for gender changing the Extra Heroes, there is no way to gender change Rio, Mele, Wolzard, Kuro Kishi, DekaMaster and DekaSwan. I can kind of see Magimother and Signalman gender-changing but I don't think it'll happen. I don't see a change in Mele because she has a female figure, the breasts and various other things. A skirt on Rio would look silly. DekaMaster and DekaSwan fall under the thing that Dekarangers have no skirts. Wolzard kind of alreayd has a skirt of sorts so it would look weird. Kuro Kishi with a skirt would look strange, as GoseiKnight too, hence we never seen a female GoseiKnight. Even though their teammates (GingaPink, GoseiPink, GoseiYellow, respectively) have skirts, their suits are radically different that it could fall in the realm that they can't gender change. 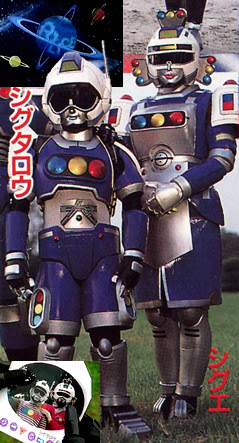 Signalman has a wife Sigue that has an apron and earrings, so a female Signalman theoretically could happen but that would too fan-indulging I suppose, a fringe sector of the fandom. 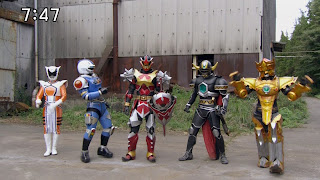 And as for Zuuban, it goes with the Dekaranger/Changeman/Bioman/Fiveman, etc. logic that if the females didn't have skirts to begin with, then when they gender change, the suit wont have a skirt. Since Zuuban has no team counterpart, it remains the same, also I see Zuuban as genderless, it was just an it, not really a he or she. I don't think he can reproduce. He sounded male, but again, poking holes. So I don't think we will see gender-changing Extra Heroes because that is too much hole-poking.
Posted by Lavender Ranger at 11:04 PM

well Zuuban did come from a skirt season but oh well.
it would be very funny if the guys ever do the female key by mistake and to hear Marv or Joe's voice coming out of Mele or Magimother.

Personally, regarding there being a separate key for Kaoru, I agree with the prevailing theory on TV Tropes: She was active separately and at the same time as Takeru, so there would /have/ to be two sets of Shinken Red powers. Which would mean 2 keys.

As for gender changing the Extra Heroes, I figure that most of them are simply "them." Otome Shinken Red, yes, was specifically a female version of Shinken Red. So yes, a guy using the key would give us male Shinken Red. But outfits that don't have differing gender suits (like Sun Vulcan, in addition to your example), the suit stays the same, regardless of gender. So for the Extra Heroes, it's less "character is male" or "character is female", and more "this is how they are, there isn't an alternate." I doubt we'll see any of the guys using the "female" keys (or Ahim using one of the "male" ones, for that matter). Heck, we've probably only got 10 or so episodes left, I'm not sure we'll see them used more than once or twice more.

Semi-related, the female Shinkenger outfits irrationally bother me, now that I realize what the "triangles" under the belt on the guys' outfit are supposed to represent. I wouldn't mind not seeing Otome Shinken Red too often so that I don't have to see it.