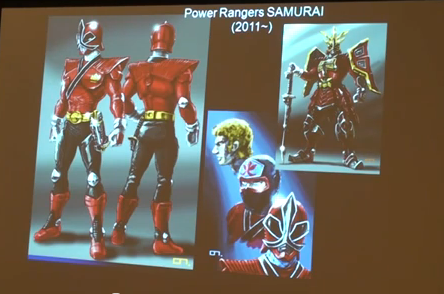 This is a video of Tsuyoshi Nonaka Panel at the Pacific Media Expo. He designed for PLEX the Mega Mode and Shogun mode for Power Rangers Samurai. For those who don't know, PLEX designs for Toei and Bandai the designs of Kamen Rider, Super Sentai and Power Rangers. He explains why the Samurai Rangers have the ninja/wrestler-like mask under their helmets. He explains that because they didn't know who the actors were going to be before they made the toys, they made those wrestler masks and Saban accommodated that to match the toys in the series. He also said that the Mega Mode was inspired after the Movie suit designs. That he usually saves that kind of design for Kamen Rider.

Posted by Lavender Ranger at 5:48 PM