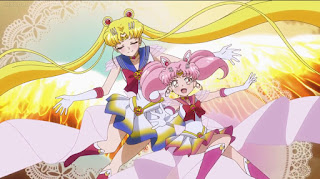 Chibi-Moon wanted to be as strong as Super Moon and became Super Chibi-Moon. They do Rainbow Double Moon Heartache which hits the Mistress 9 Monster and she fights it back. The Trio struggle holding up the force-field. The Pharaoh 90 is rising up. His eyes open. Sailor Moon notices this. He swallows Mistress 9. He says it is a lot of power. Venus says he will swallow the planet. The Senshi and Tuxedo Kamen (La Smoking Bomber) do their attacks to Pharaoh 90 but he absorbs the attacks. Moon tells him to vanish. Pluto and the other two are still holding up the forcefeild. He bubbles up. We see Mistress 9' corpse. 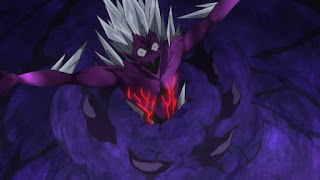 Chibi-Moon runs out of power and falls. Tuxedo Kamen catches her. The others fall too. The trio watches the Inner Senshi faint. The bubbles go up. Moon thinks he is stronger. He struggles against the barrier. The Outers speak to him. Moon calls to the Outers. He bursts through and fills the barrier. The Outers brace themselves and the barrier shatters. The purple stuff flows throughout the city. The Outer Senshi faint. The vortex above them tears up and shows the Tau Star System which Mercury recognizes. It grows bigger. Pharaoh is covering the planet. Chibi-Moon awakes in Tuxedo's arms. Moon says there is no power left. Then she sees a bright light from above, it is the moon. 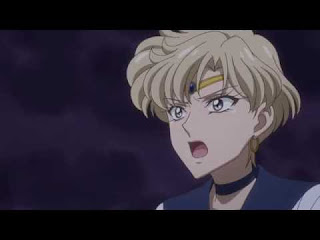 Everyone looks up at the Moon. Usagi remembers the Silver Millennium and also the Outers, how they protected her. She remembers Chibi-Usa saying Hotaru lives in their hearts. Usagi says it is her turn, all their power is within her, she must protect them. She calls for the Moon Chalice. She winks and then goes into the abyss, shocking everyone. She says she will release her power within the Pharaoh. Tuxedo tells her to stop but she enters the purple sludge. The cats loose detection of her. Tuxedo is mad he couldn't save her. Chibi-Usa screams out, "Mom!" Haruka thinks back to when she met Usagi and interactions with her. Haruka says all she wanted to do was protect her. The other Senshi mourn her. The Tailsmans glow. 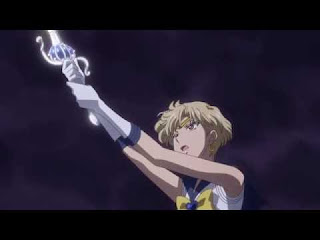 The Outers raise up their talismans. Beams of light emit from them. Mistress 9 glows. Pharaoh doesn't like this. Purple light comes from Mistress 9's corpse and wind blows strongly. Out of the vortex comes a purple orb. The Outers can't believe it. It is Sailor Saturn, complete with her glaive. She rises up and the Saturn symbol glows on her forehead. Her tiara appears and she makes a pose. She says she is the emissary of death, the guardian of silence. The Senshi can't believe it. Mamoru asks if this is the end. Saturn feels like it wasn't so long ago she destroyed the Silver Millennium, she is always the unwanted guest. She floats down. 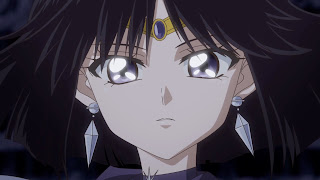 She pokes Pharaoh so he can't move. She thinks back to Hotaru, where she should had died but became a cyborg. She says the destruction was predestined. She pulls out her glaive and says she must swing it down. Pluto says that means the end of the world. Uranus is mad. Saturn floats upwards. Chibi-Usa wonders if there is no future. Saturn does Death Ribbon Revolution. The master says his powers are being sucked out. A strong wind blows on everyone. Master says this power is even stronger than anything he has seen. The purple sludge starts moving up. Saturn calls him an invader and her glaive glows. Mamoru says it is the end. Chibi-Usa calls Sialor Moon. Sailor Saturn in slow motion swings her glaive. 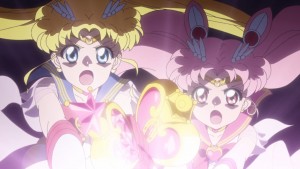 Review:
An impacting episode. The music is good, not perfect but appropriate. Sailor Moon scarafice was nicely brief and not milked like in previous Animes. And anytime Sailor Saturn gets screen time, it's a good thing. This Anime has remained faithful to the Infinity arc but has changed the timing in some things and moved information to other places skillfully. Also the timing of music and moments have been better than in past seasons. 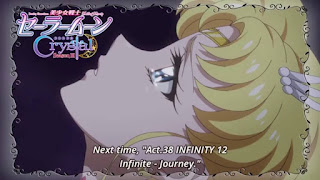 Moon sacrificed herself and Saturn awakened to do her attack on the Pharaoh. Pharaoh moans. Everyone else are covering their faces. Usagi is in the abyss. Saturn does fancy moves with her Glaive. Tuxedo Kamen watches, holding onto Super Chibi-Moon. The cats watch Tuxedo and Chibi-Moon. Moon's brooch glows and the grail glows. The Pharaoh groans. Mars tells the others to look. The light goes up and the purple sludge disappears. Moon floats down in a orb. Everyone is happy. The Senshi turn into their super modes. Super Sailor Moon floats down on a pillar and kneels down and does a praying motion.. Pharoah tries foinf back home but he is all black and starts loosing power. Saturn sees this. Saturn floats upwards and says she will send him to the void. Moon shouts to Saturn. Pluto says Saturn will be sucked into another dimension with Pharaoh. Everyone worries about Saturn. She says there is no need to feel despair, that rebirth will happen. 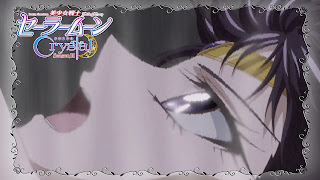 She says Moon will bring peace. Because she released the power, she was able to save the planet. She is the guardian to enable rebirth. Saturn calls for Pluto, saying to close the path. Pluto is not for it but does it, calling her father Chronos. She does Dark Dome Close attack and Pharoah shouts, being sucked into the time door that has been opened. Saturn goes in and looks back at Chibi-Moon who shouts for her. The door closes. Chibi-Moon cries. A purple ball floats above Sailor Moon.  She thinks back to Saturn's words. She clutches it and it glows. Moon cries. She glows and becomes her Neo Queen Serenity form and calls her rod. It glows and the city returns to normal. The Cats watch this. The image of her is like the Messiah that Tuxedo saw. Day comes. They hear a baby. The Outer Senshi go down and find it is baby Hotaru. Michiru picks up baby Hotaru. The trio will be her parents, Pluto agrees. Super Sailor Moon returns and the gang reunites. Uranus says they must leave, given new life from her. Chibi-Moon asks where they will go. Uranus is not sure. Pluto says they will meet again. 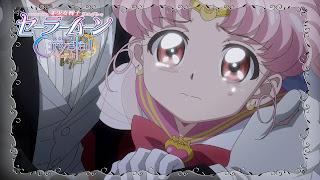 Pluto and Moon hold hands, saying they will meet again as they are friends. Chibi-Usa cries. Michiru says they will return and it is a promise, given Chibi-Usa her mirror. They turn and leave. Moon calls for them but it's too late. Sometime later, Chibi-Usa writes to her parents, saying she is a full Guardian and she is heading home during a solar eclipse. She meets with the girls, They hug. Usagi is happy because she is wearing her High School uniform except for Rei. Rei and Chibi-Usa make comments about Usagi's school grades and she cries. Minako tells her she is happy to go to school with her. Usagi and Minako are happy. They talk about clubs they will join. Mamoru arrives. He is now an University student. Usagi says bye. The others realize Chibi-Usa is returning home. Chibi-Usa says bye to the four girls. Diana thanks them for everything. Usagi asks for Luna and Artemis, Diana says they are crying in the base for her. Mamoru talks about the solar eclipse. Chibi-Usa sees it with special visors. It gets darker. Chibi-Usa hears a bell. Usagi does too. They turn around and screen goes black with a rose petal. 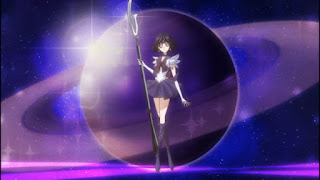 Review:
Some people didn't like this season but I do. It is better than the past seasons. And unlike the original Anime, it gives time to old characters like Minako, Ami, Rei and Makoto. Maybe it doesn't shed as much on Haruka and Michiru's relationship as wished but it remains faithful to the Manga like past seasons. They didn't emphasize the difference between the Messiah and the Deity of Destruction as much. It is made clearer Usagi was the messiah. Also there is a lot use of rose petals which I wish was used exclusively for Tuxedo Kamen like in the past and not for pretty much every character now. Oh well. Everyone was disappointed with the S finale and I guess this one too as it is a bit anticlimactic. I don't think so.
Posted by Lavender Ranger at 10:49 PM