Slegde and Heckyl were American creations. Some fans believe Heckyl is inspired by Enter from Go-Busters but the actor Ryan Carter and producer Chip Lynn have confirmed that to be untrue. 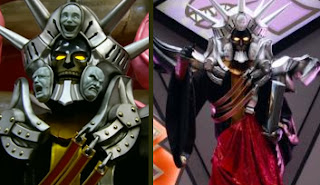 Chaos/Lord Arcanon
Unlike Lord Arcanon, Chaos was in Kyoryuger since episode 1 like Sledge was. Lord Arcanon did not come until mid-way into Dino Supercharge. Chaos was the 'voice' for Deboss and was later possessed by Deboss. Lord Arcanon was Sledge's boss that later came in with replicas of the Dino Chargers and piloted the Megazords. Both were destroyed by the Rangers. 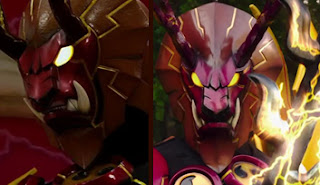 Dogold/Fury
Dogold was a suit of sentient, magical Oni-themed armor that was created by Deboss during their attack on Japan during the Sengoku Era. His primary mission was to posses Utsusemimaru and take control of the powerful Zyudenryu, Pteragordon. Fury is an alien sent by Sledge to get Keeper and the Energems but ends up losing them. So Fury stays on Earth for millions of years, gets Sir Ivan trapped inside of him and scares off James Navarro with the Aqua Energem. Fury then serves Snide and later Arcanon. He has a small rivarly with Singe. Dogold's fur coat had more of a significance than Fury's which appeared and disappeared. Fury was exploded in the past by Keeper's bomb. 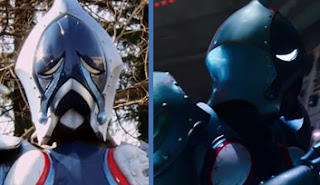 Aigaron/Wrench
Aigaron is a Sorrowful Debo Knight General who cries all the time but has fierce tactics and fights with a battle axe. He is saved a couple times after exploding. In Power Rangers, Wrench is a robot inventor that creates devices and monsters, he creates Curio and helps getting Ivan out of Fury. Aigaron took down Ian's friend Shiro (played by the actor who was Go-On Black). Wrench was destroyed in Sledge's ship in the sun. 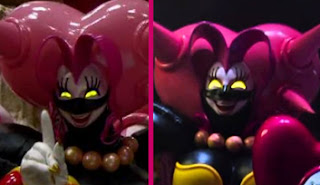 Canderilla/Poisandra
Canderilla is a singing happy-go-lucky knight seems to abhor senseless violence. She also had a human form. Poisandra is Sledge's fiance who somehow stayed by her man for a million years in not getting married but then throws a hissy fit after one day. Sledge is destroyed and she continues serving Snide and Arcanon. She seemed to have musicial powers but only long ago and never used again. Canderilla later became friends with the Kyoryuger. Poisandra was hoisted into the sun with Sledge's ship in the past. 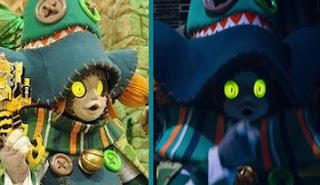 Luckyuro/Curio
Curio was created by Wrench from monster parts to be Poisandra's friend. He is kind of dumb. Luckyuro was female and she made the fewest monsters compared to her fellow knights but is responsible for causing them to grow in size after their defeat using Restoration Water. She acts as a spy for the Deboth Army. Luckyuro's growing ability was replaced by the mangabeam of the Sledge ship. Luckyuro later became friends with Kyoryuger. Curio was sucked into the blackhole with Sledge's ship and since the whole gang was destroyed in the past, he was never created. 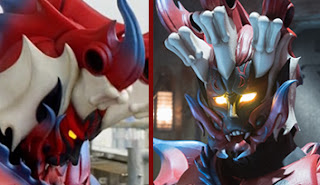 Endolf/Singe
Singe mysteriously came to Earth and helped Snide but ended up working for Arcanon who upsurped Snide and Heckyl. Fury didn't trust Singe. Singe is powerful and has a sense of humor. Endolf  was created by Chaos in episode 25 to counteract the Kyoryugers' Brave. Chaos then explained that Endolf is to deepen the emotions that the Army collects in order for Deboth to gain power that will resist the Kyoryuger's Brave, with Endolf deciding to work with Aigaron first, collecting Ian's resentment against Aiagron for slaying Shiro, lamenting that he can't collect the vengeful emotions Aigaron is emitting. Both characters had headaches. 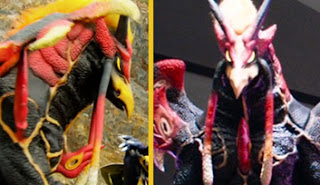 Mad Torin / Doomwing
Mad Torin is an evil doppelgänger of Torin (Zenowing) created by Chaos. His form is considered the true form of Torin when he was still a part of the Deboth Army. Mad Torin falls in battle to Torin when the Wise God transforms into Kyoryu Silver. Doomwing on the other hand had no connection to Zenowing other than being cursed by Lord Arcanon to share a body and letting Doomwing morph into the Silver Ranger. But the Rangers split Doomwing and Zenowing apart. Both Mad Torin and Doomwing met the same fate. 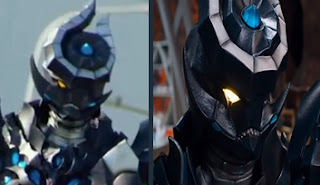 Neo-Geildon/Snide
Neo-Geildon is an evil "embodiment clone" created by Space War God Burodosu in the film Zyuden Sentai Kyoryuger vs. Go-Busters: Dinosaur Great Battle! Farewell, Eternal Friends. Not the original Darkness Messenger Geildon, he is an evil embodiment of the regret of the Evolian in their failure to defeat the Abarangers. The original Geildon costume was used for Zeltrax on Power Rangers Dino Thunder. The Neo-Geildon suit was used for Snide but was unconnected to Zeltrax. Snide shared a body with Heckyl, an American creation. Snide was destroyed in new American footage, I don't think there was any Sentai footage used for him.
Posted by Lavender Ranger at 7:21 PM