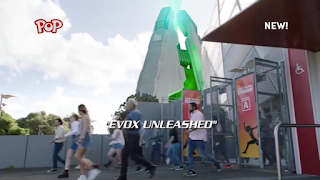 People are exiting a building. Human Roxy guides them out. Traffic is jammed. Zoey's mom announces on the news with breaking news. Shaw tells everyone is an emergency. The Mayor says the city must be evacuated. The Beast Morpher Rangers are behind them. They cut and Zoey's mom asks Shaw to let Zoey come with her. Shaw says Zoey is critical to her success. Zoey's mom wants to see her. Yellow Ranger takes off her helmet and reveals her identity. Zoey's mom hugs her and tells her she is proud of her. Zoey's mom says she understands her and the city needs her. Zoey thanks her and leaves. Nate fixes an arrow and gives it to Ben to put in the Bow. Devon arrives with cases with Betty. Betty takes the cases away. The Rangers run. Evox is near a tower. 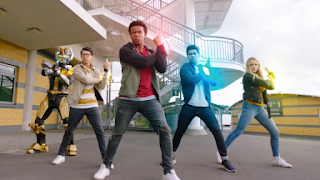 The Rangers morph. Devon has a Ninja Super Steel Blaster from Ninja Steel, Steel has RPM Silver and Gold's weapon the Cloud Hatchet, Zoey has a Lightspeed Rescue's Therma Blaster, Nate has a Dino Charge's Dino Saber and Blue has an SPD Delta Enforcer. Evox is shocked. They say he didn't hack their legendary weapons. They attack with the legendary weapons and then shoot an arrow from their BEast-X King Bow. Evox knocks it and calls Robotrons. The Robotrons fight the Rangers and Evox leaves. He enters the main source room. With the energy of every tower, he enters the power source. Steel gets the anti-virus arrow and enters the tower. The Rangers destroy the Robotrons and go after Steel. Steel enter the green energy where Evox is. He stabs Evox with the arrow. Evox laughs and absorbs it. 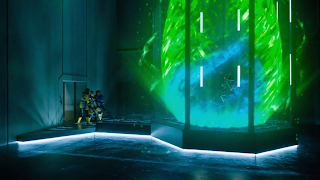 Evox blasts Steel, who de-morphs and shuts down. He glows blue and flows around like energy. Evox laughs. Nate cries. He blasts them and they fall out of the tower, de-morphing. The mayor and Zoey's mom come in a GB car. The Rangers calm down Nate and go to the base. The Rangers inform them about Steel. Devon gets a walkie-talkie and tells Grid Battleforce that they went against Evox and Steel made a choice to fight Evox alone, and did not return. He says Grid Battleforce has to evacuate. He says the Rangers will stay and fight. Ben and Betty say they won't evacuate. Beast Bots say they will stay. Everyone else agrees. The sky goes dark and red energy swirls around Tower one. A huge Gigadrone appears. The Ultrazord is prepped. Shaw gives an inspirational mini-speech. The Rangers run. Evox encounters the Beast-X King Ultrazord. Evox blasts at them and they drop their weapon. Evox makes the Ultrazord goes down. 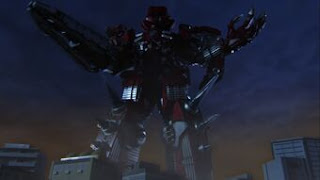 Evox mentions Steel. He says being human makes you weak. Nate says Evox couldn't handle being human, with Steel and the Mayor. Nate goes to Devon's cockpit to reroute the Morph-X to human DNA. He made the other zords offline. They make Beast-X King Megazord. The Morph-X flows through the and attack Evox. They glow green. Green energy flows from the megazord to him. He screams. Explosions occur. The Megazord flies out. They destroy him and Evox is eliminated. The Rangers cheers. Green energy flow everywhere. Nate says the Morph-X is returning to the Morphin Grid. A blue swirl emerges. They watch it as they see Steel's form. It changes into a teenage boy. Nate cries. The boy says he is Steel and can't believe he is human. Nate hugs him. 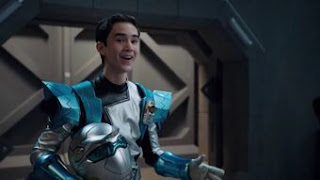 He says the Morphin Grid did it. Steel can not believe it. They all hug. A year later, Ben and Betty capture Scrozzle. Colonel Truman has brought him. Devon is now the commander. Truman says they found him in the Corinth sewers. Truman leaves. Devon welcomes them and alerts them of operation 3-6-5. The mayor says they use wind energy now. Mayor hopes Zoey never runs for mayor. Nate and Zoey run off. Ravi paints Roxy in the park with his mom. Ravi runs off because of a call. Steel fights some punks but it turns out to be a movie and Blaze is his stunt double. He gets an alert from Devon and leaves. Steel morphs into the Silver Ranger. He finds the base empty. He takes off his helmet and it is a surprise birthday party from the team. He is one years old. He says he has everything he could possibly want. They celebrate.

Episode Review:
Good sweet episode. Nice to have Colonel Truman around for a cameo.

Posted by Lavender Ranger at 8:30 AM