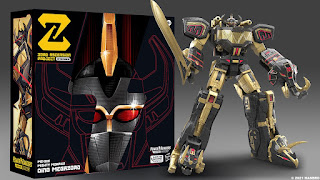 When I saw the upcoming Black and Gold Megazord, I was like I rather have the regular one but I had no idea what NFT meant. NFT stands for Non-fungible token. The Black & Gold Zord Ascension Project Dino Megazord will be an NFT exclusive from Hasbro. The NFT is a placeholder. The controversy is that NFT is a risky business, it wastes raw computing. First of all, fans don't like that it is black and gold, and second that they need a token. The third is that the NFT is controversial in itself. I had no idea what NFT was, apparently, it has hit other franchises but this is the first time it affects Power Rangers. But since it is exclusive and limited, I am hoping this isn't a big dent to what have you. I still don't understand what raw computing means to be honest.
Posted by Lavender Ranger at 8:48 AM