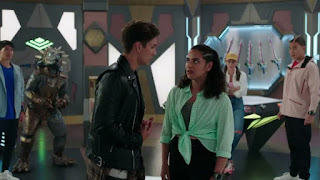 Izzy trains the Rangers and others on a hill. Javi thought Izzy and Fern were rivals, but they are getting along. Javi noticed Izzy is wearing perfume, new hair-do, and her behavior and thinks he has a crush on Adrian. Amelia mentions Izzy has been in a good mood lately. Javi tells Adrian that Izzy has a crush on him and wants to set them on a date. Adrian says he never thought of Izzy like this. A young man overhears this and disappears, transforming into Slyther. Slyther asks for Fogshell from Void Knight. Later, Adrian and Fern are the only ones left. Zayto sends them to get the hotline when Fogshell makes fog around them. Slyther kidnaps Adrian. The Rangers morph and fog confuses them--has them hit each other. Zayto dons Blazing Fury armor and takes down the Hengemen. Mucus and Fogshell run away. Amelia, Ollie, and Zayto teleport away. Javi offers to take Izzy to lunch, but Izzy and Fern are to do lunch. Javi attaches himself to the lunch and he calls Adrian. Slyther transforms into Adrian and answers Javi--who makes him 'surprise drop' by at the lunch. Fake Adrian wants to kidnap Izzy. 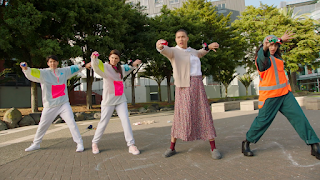 At the taco lunch place, Izzy, Fern, and Javi are together when Adrian appears. Javi invites him to sit down. He has Fern go with him. He convinces Fern to leave, saying Izzy likes Adrian, which disappoints her. She thought Javi was interested in her, so she clarifies she is not into boys. Fern leaves. Javi makes up bad excuses for Fern leaving and also him leaving. Once Javi leaves, !Fake Adrian confesses his love for Izzy and recites a poem on a long scroll. Izzy is uncomfortable. People around them start laughing and Izzy is embarrassed. Izzy and Adrian leave. Adrian transforms into Slyther and tries kidnapping her. She kicks him and teleports away. Back at the base, Izzy tells the other Rangers. Javi admits Slyther probably overheard him trying to set up Adrian and Izzy together. Izzy is visibly upset. Zayto wonders about Adrian. Javi calls Adrian and finds Slyther. Slyther wants to trade for all the Sporix alone. Izzy says Javi had no right to meddle. Solon says to make a plan. Ollie thinks of making fake Sporix Chest with the double key. 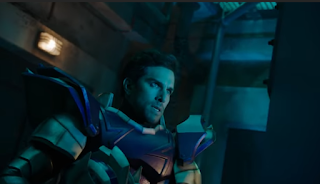 Izzy is mad but doesn't want Javi to go alone. They make a plan to go in disguises. Mucus, Adrian, the monster, and Slyther arrive. Javi teleports in with the Sporix chest. Mucus leaves with the chest. Slyther says he will give Javi Adrian back if he gives him his DIno Key. The Rangers fight Fogshell in their disguises. The old lady turns out to be Zayto. Izzy frees Adrian and Adrian runs off. The four morph. Zayto calls his zord to fight Fogshell. The others call their zords. Fogshell brings more spell, Slyther puts a spell on it and teleports away. The Zords hit themselves. The Dimetro Blazing Zord arrives. Zayto makes them combine into T-Rex Blazing Megazord. All five Rangers enter and destroy the fog. They call the Mega Fury Saber and destroy Fogshell. Izzy gets the Sporix from Slyther. Slyther teleports back to the base and makes a big show for Void Knight. He is at first happy to get the Sporix Chest. But then they find out it is a fake. Void Knight scares Mucus and Slyther. Slyther turns into slime and Slyther slips into it. Void Knight takes off his mask and apologizes to his comatose love, saying he won't stop. Outside at the park, Javi apologizes to Izzy. He then apologizes to Adrian, saying that he swore she had a crush on someone. Adrian makes him look at Izzy and Fern. Izzy and Fern hold hands and go off to lunch. Amelia is visibly happy for the couple and cheers them on. Javi finally gets it and wishes her a good time. 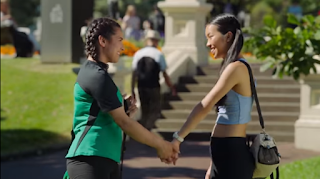 Episode Review:
I never thought this day would come. As a gay man, I never thought we would get an openly gay Ranger on Power Rangers. In a previous post, I went over "shipping" and "queer coding." Even though the word 'gay' is not utter, it is pretty obvious as the whole episode is about Izzy being 'in love' or 'having a crush.' Javi, of course, only trying to help and trying to pair Izzy off with someone. Unfortunately for him, he just sticks with his heteronormative norms (pun intended). But it is innocent. Javi is excused for his thinking, as the show assumes the viewers (or children) only know about heterosexual relationships. Once the Rangers discover Izzy is interested in Fern, they are almost blaise about. Zayto just says "Oh." Probably on Zayto's planet, same-sex relationships are the norm. Apparently, wherever the villains come from, they do not know about same-sex relationships as they didn't figure Izzy was into Fern either. Even though Javi probably knew about gay people and he supposedly knows his step-sister well, it never occurred to him she would be into Fern. Anyway, innocence is excusable. it was a good episode, I am not saying it was bad. This stuff happens in real life. I hear that the crew pushed this to happen and there was some pushback (maybe the network, not sure). I am happy it got made in the end.

Posted by Lavender Ranger at 9:34 AM