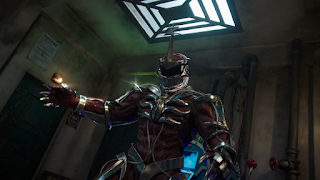 Episode Summary:
Someone in a cape clunks within the evil base and tries to take soemthing. Void Knight calls them a thief. Lord Zedd reveals himself from the cape. He lifts Void Knight in the air. The others cower. He calls a monster his master. Mucus wonders why Reaghoul is nice. Reaghoul reincarted Lord Zedd and put a complanance collar. Reaghoul revives old monsters. Void Knight will give him one Sporix if he captures the Rangers. Lord Zedd cackles. At the news place, they are celebrating Halloween. Ollie makes fun of Amelia's vampire costume. Javi is going as his dad in a dance. Zayto says they dont have Halloween in his planet. Amelia says clowns are scary (I agree). Izzy is afraid of Zombies. Zayto wants to go as a box. Ollie claims not being afraid of anything. Izzy thinks they can scare him. 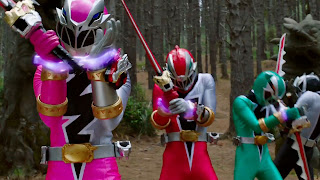 Amelia will make a haunted trail for Ollie to scre him. Back at Dinohenge, the other four finish the Haunted Trail. Ollie is not scared. Zayto says he gives them five minutes. A monster arrives and the Rangers morph. Zedd arrives and puts sleepy cuffs on them. They fall and sleep. Reaghoul tells them to search for Ollie. Ollie walks through the decorations. A skeleton drops down and doesn't scare him. Two monsters find him. Ollie contacts his friends with no answer. He morphs. He avoids their attacks. He remembers one of the monster's howling attacks. He remembers when they created a treat for him to make him stop howling. Ollie asks Solon for a No Howl Drop. She arrives and drops it in the monster, taking out his hiowl. Solon hides behind the tree. Ollie fights the two monsters and destroys them. They return to life, thanks to Reaghoul. Ollie talks about physics and takes out the Spin Key. 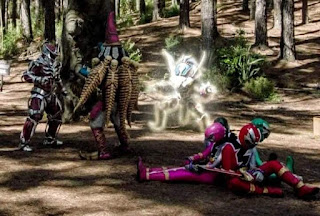 Ollie finds the Rangers and Solon. He recognizes Lord Zedd. Solon says he is too strong. Ollie calls him out. Ollie makes fun of him following Reaghoul. Solon and Ollie teleport away. Lord Zedd wants to destroy the others, Reaghoul stops him The two monsters return. At the base, Solon has an idea about Zedd-watching the legendary database Mick gave them. They watch video of Lord Zedd. Solon shows them how he turned the Rangers back to children, his zord Serpentera, and stealing Green Ranger's energy to create the Dark Rangers. Ollie says he is tough and terryfying and asks how they defeated him. Solon says it was scaraficing Zordon to get rid of Zedd. They watch Andros destroy the tube and Rita and Zedd becoming human and good. Ollie says there is no way to recreate what Zordon did. Solon and Ollie mention the Compliance Collar. Ollie finds it in the database. They watch a video of Beast Morphers with the Compliance Collars. 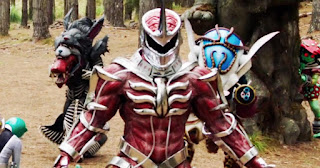 Mucus teleports where the Rangers and Monsters are. Ollie arrives. Lord Zedd says to bow before his Master. Ollie makes the Dino Dagger and destroys the Compliance Collar. Lord Zedd is happy to be free and goes after Reaghoul. Reaghoul and Mucus teleport away. Zedd fights the two monsters and Ollie frees the Rangers. Zayto says to help alongside the Beasts. The Rangers join the fight and fights Zedd. The Rangers slice and dice Zedd. Zedd says they are lucky he doesn't have his staff. He teleports away. The two monsters grow. The Rangers call the Megazord and destroy both. Afterwards, Reaghoul is put away in a cell with sleepy cuffs. Back at the base, Solon sees the Rangers in their Halloween costumes---Ollie (Astronaut), Amelia (Vampire), Izzy (Lepruchan), Javi (Zombie Park Ranger), and Zayto (Earth Knight). Ollie admits he was scared Lord Zedd, his biggest fear is losing his friends. They teleport away. 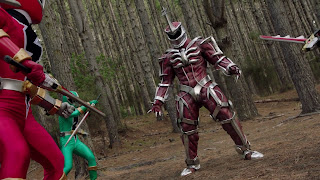 Review:
Other than not using the original voice actors (their excuse is Lord Zedd's original voice actor Robert Axelrod passed away recently and the original videos don't have individual tracks to replace music), having Lord Zedd in this episode or Dino Charge timeline seems out of left field. Other than the Morphin Masters and dinosaurs, Dino Charge doesn't have much connection to MMPR. The Villains are not even similar--Void Knight has a lady love in a coma and he is more active than Zedd. Mucus, the comic relief villain gets out more than Babboo and Squatt ever did during Zedd's tenure without Rita. I did like how the episode kept the clips to a minimum and was more of the old seasons than Dino Fury itself. I also liked the not so subtle rainbow reference with Izzy.
Posted by Lavender Ranger at 3:41 PM