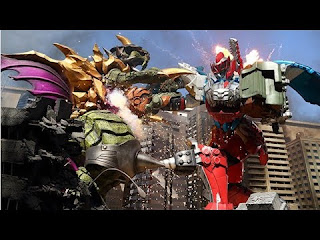 Episode Summary:
Izzy and Aiyon race on bikes when Izzy gets rammed by accident by Aiyon and crashes. Her bike is damaged. They find an old truck that was overturned. It has "Area 62" on it. They find a box. She says: Finders Keepers: but all that is inside is an old dog collar which she tosses. He finds another box. They find a lot of money. Izzy says "We" but AIyon says he found it. She is mad. They teleport away. Mucus finds the dog collar and puts it on. She grows. She swats birds away and gets electrocuted by wires. She shrinks and has the collar. Back at the base, Zayto asks AIyon what he will do with the money. Izzy and Aiyon argue. Aiyon teleports way, He finds a jacket he likes. He spends the money on clothes. Void Queen has Tarrick in the same container he had her in. He is mad. She hasn't told the others he is there. Mucus shows the dog collar that makes her big.

Void Queen takes a Sporix out--Flapnarox and has Mucus give the collar. She shocks Mucus and she lets go the collar. Back at the base, Amelia and Ollie covertly flirt with cleaning swords. Zayto and Javi spar. They see the giant beast. Zayto calls Aiyon and he doesn't answer. Izzy calls him a jerk. They teleport away. The monster sends lightning towards them. The five morph. Flapnarox flies \away. The Zords are sent. They form Dino Fury Megazord Smash Formation. Izzy calls the Ptera Freeze Zord, which she and Javi pilot. They fly on top of the monster and bring it down to the ground. She knocks them off with electricity. They combine to make the Ptera Smash Ultrazord. Monster knocks them all out.

Flapnarox shrinks down and shows the collar. She calls Hengemen. Izzy figures out the collar is the one she found. The Rangers fail at getting it. She teleports away. Zayto says they might need something new. Pop Pop, Amelia's grandfather spots Aiyon and says he is stylish. Aiyon explains he is down because of his argument with Izzy. Pop Pop says buying new things might not always make you feel better. Aiyon gives Pop Pop his jacket. Aiyon and Pop Pop hug. Aiyon thanks Pop Pop for feeling better now. Aiyon donates the skateboard to a boy. At Area 62, Void Queen tells Mucus to charge the collar. At the base, Solon says the Primal Ultrazord can help them. Zayto says his team risked everything when they used it. Solon has to scan Aiyon's key. Amelia calls Aiyon and he doesn't respond. Izzy teleports to find him. 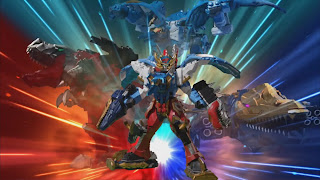 Izzy finds Pop Pop and they talk about all the stuff Aiyon gave away. Aiyon finds out he took his comm off. Izzy and AIyon teleport to the base. Aiyon gives Solon hsi key. He apologizes to Zayto. Solon gives the key back when the monster attacks. Solon unleashes the Zords. T-Rex, Mosa, and Ptera combine to make the Primal Ultrazord. The Rangers say the formation is stable. They fight the monster. The Ultrazord teleports and swings the monster. The monster is thrown and busts through mountains. The Ultrazord pushes her into the sea. They fight in the water. They conduct Primal Triple Beam and she ends up in space. They fly into Space and do the Primal Ultra Blast and destroy her, smashing her unto the Moon. At the base, they celebrate. Aiyon apologizes. Ollie wants money, but Aiyon says there is no money left except a new bike for Izzy. They hug.

As much as I don't like Aiyon, I liked this episode mostly because of Pop Pop.

Posted by Lavender Ranger at 7:26 PM