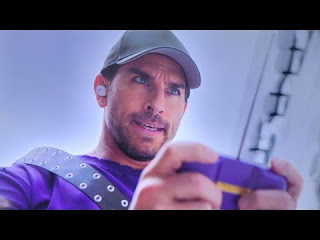 Episode Summary:
At the villain lair, Slyther, Mucus, and Wreckmate have been helping Void Queen find Void Knight. Void Queen wakes up Trackenslash to find Void Knight. Wreckmate has another project with Wreckmate. Tarrick (in a purple shirt showing off his biceps and a cap and some weird belts around his torso) sends a drone in Buzzblast to listen in to the Rangers. Zayto doesn't trust Void Knight and thinks he won't change. Jane is limping and doesn't want to use a crutch. She does a live stream, saying they will hit 10 million subscriptions soon. J-Borg puts a video but it turns out to be how Jane got injured--doing dance moves. The computer freezes and J-Borg struggle to fix it. Everyone laughs at the video and Jane tries playing it off. They go offline and then a hacker with a clown mask says she has control of BuzzBlast. She does lame pun jokes that only Aiyon likes. She wants her own BuzzBlast show. Aiyon doesn't understand why everyone is serious. They explain they might lose their jobs. Solon says a Sporix Beast is heading t Buzz Blast. Tarrick closes communications with his drone. His drone falls off the ceiling and J-Borg finds it, thinking it is connected to the hacker.

The Rangers face them and Javi says a bad joke. They find out they are looking for Void Knight. The Rangers morph and fight. Green uses Sprint Key and fights the monster. She is knocked down. Gold uses Electro Battle Armor. The Monster fights Blue and Red. Void Queen asks for an update and Slyther tells her about the Rangers. She just wants Void Knight. The Rangers tease the Monster and he blasts them, getting them down to the ground. The villains retreat. Back at the base, the Rangers re-watch the hacker video. Aiyon likes the jokes. Izzy has them zoom in and spot a fountain. She says she knows the park. They arrive at the park and look for clues. Aiyon picks up trash and a little girl asks why he is doing that. They find a rubber fish. The little girl says the same puns the hacker says. They shake hands and he finds out she is the hacker. She admits it. He gets an idea and takes her bike wheel. If she wants the bike wheel back, she needs to unfreeze the livestream. He tells her she has potential and don't waste it. He puts the wheel back and leaves her.

The villains find a guy who has the same outfit as Tarrick. The victim calls the Rangers. Tarrick saves the victim and teleports away. The monsters call him tacky. The Rangers arrive and they fight. Pink uses Hyper Key and fights Trackenslash. He falls. The Hengemen are destroyed. Pink uses Muscle Flex and the others fight the monster. Red calls the Smash Dino Key and dons the armor. He punches the monster. He is pushed back. Back at BuzzBlast, J-Borg admires Void Knight's drone. The little girl admits the truth. J-Borg asks if she made the drone, she says no. Tarrick checks his drone and hears the conversation between Jane and the girl. The girl apologizes and says she can fix the hack. She gives her a flash drive with a fix code. Tarrick overhears the Rangers are in trouble. 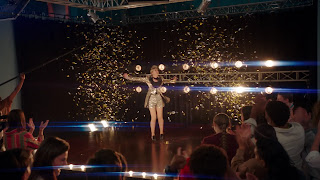 Void Knight arrives where the Rangers are. Izzy tells Javi to give them a chance. Void Knight fights the Beast. He does his Void Slash on the monster and shatters his blades. Red defeats the monster with his final attack. Red gets the Sporix. Void Knight says Sporix don't matter and he is on their side. Zayto says he has to return the Sporix. Jane thanks the little girl for fixing the stream and says she can audition for a comedy thing. Aiyon is happy and she thanks him. Javi is surprised she is the hacker. The Rangers are impressed what Aiyon did. The little girl did another punny joke which Aiyon loves. J-Borg doesn't think they will reach 10 million subscribers. Jane does a tap dancing performance for the live stream. They hit ten million subscribers.

Episode Review:
Aiyon reminds me of lame Saban Brands Rangers, that just want to have fun and don't understand they are acting childish. Seriously, the Rangers are so behind on what is going on with the villains, with Void Queen and Void Knight's betrayal. Great episode though. I like the twist that the hacker is a little girl. I like how it is more realistic than iCarly on how they do live streaming. A lot of writers these days have live streaming as if it was an actual television show with a countdown, multiple cameras, and sets.

Posted by Lavender Ranger at 6:44 PM