It's been a while, I will do the character convert now for Dino Fury and then when Cosmic Fury is over, I will do it for Cosmic Fury/Kyuranger. 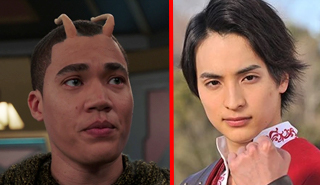 Zayto/Koh
Zayto and Koh are both Knights. The only difference is that only Zayto and Aiyon were trained to be knights while all the Ryusoulgers were trained. Also, Zayto is an alien from Rafkon. After Koh's death and promising to protect the Earth, Koh transforms into Ryusoul Red and battles against the Druidons. Zayto and Koh are also many years old. Koh is 209 while Zayto is over 65 Million years old, granted he was cryogenically frozen. Both have only one name and no surname. 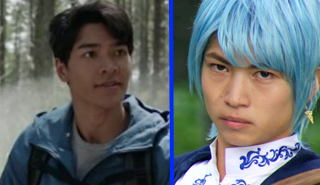 Ollie/Melto
Ollie is a hotshot skeptic. He is very sure of himself and more scientific-minded, probably because of his archeologist mother. Melto is characterized by his calm, composed, and studious nature and his intellect and wisdom. They both can be too objective and considered insensitive to the feelings of others, Even then, both are still friendly people at heart. Ultimately, Ollie fell for Amelia and they became a couple. Melto had no relationship with Asuna. 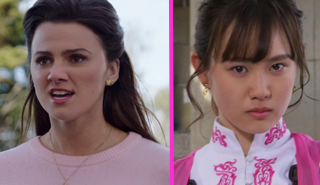 Amelia/Asuna
SPOILERS
Asuna and Amelia both are kind and compassionate people with bubbly personalities. Asuna dislikes being teased by Koh for having monstrous strength. Asuna is the closest to Ui, the only other girl in the Tatsui household. Asuna often ignores small details and prefers brute strength. Amelia believes in ghosts and aliens and the unexplained because she lost her parents at a young age and was raised by her Pop Pop. Later on, it is revealed she is actually from Rafkon and related to Void Knight and Void Queen. She also develops a relationship with Ollie. 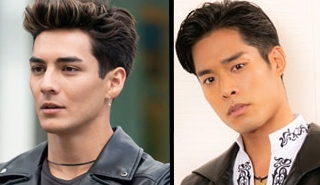 Javi/Bamba
SPOILERS
Both are hunks. Bamba was a stoic and cold person. He and his brother were rather elitist, as they are initially considering the core Ryusoulgers as "weak" due to their methods clashing. Over time Bamba loses his straightforward view on Minosaur hosts due to his acceptance of Koh, Melto, and Asuna's views as he fights with them. He eventually trusts in them as well and will lash out in anger and revenge on those who harm them, as shown when Nada backstabbed Koh and the Beelzebub Minosaur almost grew inside Asuna. Eventually, it was revealed that much of his coldness came from the betrayal of Master Black, whose destruction of a tribal village left him with intense feelings of betrayal. He eventually reconciled with him, but their relationship remains slightly turbulent. Javi on the other hand is a struggling musician trying to prove himself to his father. He didn't have much clashes with his other teammates but he is close to his sibling like Bamba and Towa. 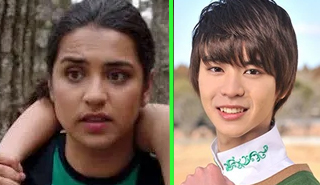 Izzy/Towa
The biggest difference is Izzy is female and Towa is male. Another thing is Izzy has a girlfriend. Towa is a completely confident and competitive knight. He originally had the mindset of "the ends justify the means" and was ready to murder an innocent girl in order to prevent the Minosaur from growing. However, he soon changes his tune following the other three Ryusoulgers growing on him. He soon realized that his way of thinking was wrong, and truly understands how Koh & the other Ryusoulgers work, due to his closeness to Sanae, a young woman who looks after abandoned dogs. Izzy has always gotten along with the others, she is a competitive athlete and high school student. 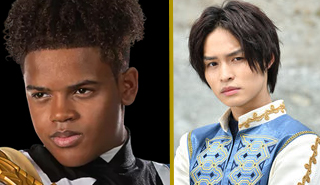 Aiyon/Canalo
Canalo is rather unpopular in most social circles due to his extreme frugality and perfectionist nature. He is also known for his slightly snobbish disposition and unfriendly manners. He wasn't allowed to join the Ryusoulger team due to a tragic event in the past, as MosaRex harbors a strong distaste for the surface dwellers and those from the Sea Ryusoul Tribe who interact with them. Despite MosaRex's hatred towards land Ryusoulgers, Canalo doesn't hate them and lost his confidence to talk to them as he viewed them as if they didn't look bad. He convinced MosaRex to help the land Ryusoulgers when they are in trouble fighting with Gachireus. Aiyon is also a fish out of the water, not used to Earth customs. He initially butts heads with Zayto when he was resurrected. He is much like a child, when Green Morphin Master told him she needed his help to defeat Lord Zedd, he thought he was 'the only one' to defeat him. He later took his taste for Earth food to open a Rafkonian cafe. 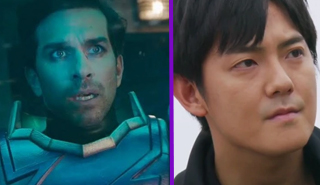 Terrick (Void Knight) / Nada (Gaisoulg)
SPOILERS
Nada was originally a student of Master Black alongside Bamba, with the intention of becoming Ryusoul Green. However, he was passed over for the position in favor of his fellow pupil’s younger brother. He soon began going on a quest to find a place in the world. Nada takes Gaisoulg's helmet after being rejected as Ryusoul Red, Nada began looking for a way to prove everyone wrong. Wearing the armor, he eventually gained Master Green's memories. Although he became an unbeatable warrior thanks to the armor, the sheer violence of it all made him find it less fun than he had hoped. Terrick, in wanting to save his wife 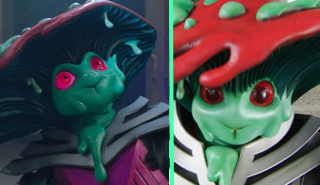 Mucus / Kleon
Kleon is lazy, bratty, obnoxious, carefree, and sadistic, and usually lies around while Tankjoh does the actual fighting. He is also slightly naïve, something Wiserue found out the hard way. Despite this, he has a genuine heart at times. Mucus is female and similar in that she does not fight, is naive, and is more interested in planning around. She seems to be indestructible, even to the last episode of Dino Fury. 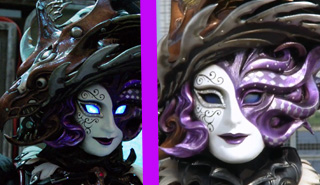 Void Queen / Madame Noir
SPOILERS
Madame Noir was not from Ryusoulger but from the unadapted Toqger. As a mother, Madame Noir devotes herself to caring for her daughter, Gritta, and grooming her to be the Emperor's wife, insisting that it take priority, putting her at odds with Baron Nero who believes that all efforts should be focused on expanding the Shadow Line so the Emperor will come. Noir eventually realizes the consequences of her actions when Gritta was consumed by Z and tries to repair her mistakes by striking Emperor Z with Schwarz. Madame Noir was destroyed while Void Queen became Santura. Void Queen was only concerned about her revenge against humans and was created with a lot of use of Sporix.
The other villains of Dino Fury were not interesting (Slyther, Wreckmate, Nulleye) or much to mention.
Posted by Lavender Ranger at 10:49 AM