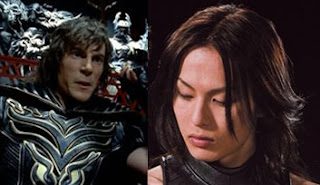 Jarrod/Dai Shi / Rio (Black Lion)
Rio is a young student of ShaFu, of the GekiJyuKen. He was swayed to the dark side, because he wanted more power. This all stemmed from an incident that occurred as a child, his whole family being murdered, which was orchestrated by Ron. For a long time, it seemed like Rio was in charge of his actions. In Jungle Fury, Jarrod was the human and Dai Shi was established to resolve Jarrod from the faults of being evil. Now, it was sort of unclear who is in control, either Jarrod or Dai Shi, an evil spirit since 'he' had to get training from the Overlords and supposedly, Dai Shi had met the Overloads before. So it was like if Dai Shi was Ron, in a way. But personality-wise 'Jai Shi' and Rio, Rio was much more subtle and unbelieving of anyone else. While Dai Shi is a little more accepting of assistance but just as cranky and angry. Rio also had his weakness of being one-sighted, to become obsessed with something. Also Rio killed more.. or he thought he did. Dai Shi showed off his 'Zocato' a lot later than Rio showed his DoRinki to Maku. By the end of Jungle Fury, of course, they had to split Dai Shi and Rio up. While Ron pulled Rio's strings and he got angry about it because he didn't know about it, but Jarrod knew it from the beginning. Casey believed in Jarrod, while no one else did or said they didn't in order to test Casey. Biggest difference, Rio died and Jarrod didn't. 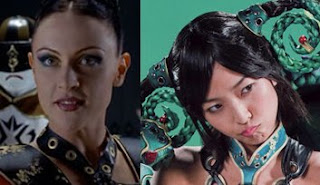 Camille / Mele
Mele is my number one favorite character in Gekiranger. She was a warrior/follower of the Kenma and swallowed Bae. She died, became a Rinshi warrior and was resurrected by Rio. She instantly falls in love with Rio and will do anything for him. Unfortunately, her love is not returned nor noticed, for a while. Camille was just waiting in the wall and her 'love' for Dai Shi slowly developed and wasn't so clear, probably because the writers released they had to put one and one together. Also, all the footage of her in her beast form had to be re-shot because of 'objectionable' 'nipples' on her chest, which actually was Chameleon eyes. Mele earned her Dorinki when going against her 'fair and square' standards by stealing the Soujyuto underhandedly and broke Rio out of a prison with it. But on the other hand, Camille merely stole the Control Dagger from Dommick underhandedly and gives Jai Shi the dagger so he breaks himself out. Fans knew it would come to the test when Jarrod would be split from Dai Shi, if Camille would love him. So, the 'love' between Jarrod and Camille can't compare to Rio and Mele; but they did it well enough by tying it up with characterization, that Dai Shi never said thank you to Camille, so when Jarrod said it, it resonated it. Mele died, Camille didn't, neither was her state as a undead person was mentioned. 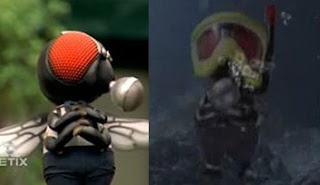 Flit/Bae
Both are little talking flies that announce the 'Megazord' battles and they used to be humans. They are basically the same, especially their MC-like voices and they can't survive too long away from their Chameleon companion. Only difference was that Bae turned himself into a fly but since his technique was flawed, he became small. Camille had 'cursed' Flit into a fly and both had swallowed them. Bae was released from being dependent on Mele by the finale. And Flit was made human again by Camille and joined Jungle Karma Pizza. 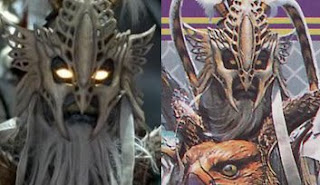 Carinsoar / Kata
Both were revived from the same place by the 'lion cub.' Both handled him with deadly teachings. Kata put Rio under a 'Rinki' spell that slowly sucked his life. Carinsoar took 'Jai Shi' to his past or in his mind and erased his good deeds, to make him more evil. Both of them pushed the lion warrior to the limit, concerning the chameleon warrior, they both didn't like her either. Kata was too much for the heroes, but Jan/Casey was able to defeat him and Ken/Dominick destroy him. 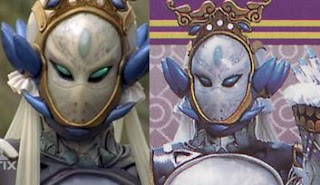 Jellica / Rageku
Both were revived by the chameleon warrior. Rageku was ShaFu's love interest but he forgot about her as soon as she betrayed him. Rageku wanted to train Mele and wanted to pit her against Rio, she didn't like men. When she proved herself, and Rio as well--in sparing with her, she agreed to teach them both. He wasn't so fond about her teachings in jealously, until she made him realize the jealous he had for Byakko, Jan's father. Both were very successful in kicking our heroes' butts. Jellica told Camille to waste the Rangers, but because Lily helped her, she released her. Rageku was killed by Ron. Jellica brought three Phantom Beast Generals to life and was destroyed by them. 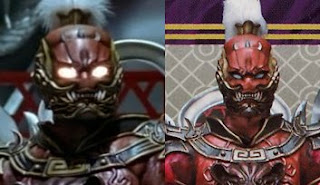 Grizzaka / Maku
Both were aggressive and possess a special power that the lion warriors want. Dorinki = Zocato. Maku's resurrection was much more elaborate. He was under the palace and needed the Ikgimo, which was taken out of him. It fell in the hands of some spoiled chick. While to revive Grizzaka, Camille merely threw a talon in a cave. Maku was once a student of Brusa E and was elevated to be his successor but he got pissed when he found out he wasn't the first choice--ShaFu was. So after a scuffle with Shafu, he started the GekiRin Rebellion, he and his followers took animal forms and killed Brusa. Grizzaka was 'friends' with Dai Shi but hates humans, so now that he is in a human form (Jarrod), he hates him. Both took the place as leader. Maku actually expected Kata and Rageku to do their dirty work, but they didn't oblige. Grizzaka had the other Overlords look for the Phantom Crystal Eye stones. Maku didn't do anything to bring the Phantom Beasts. They were defeated the same way, with the animal spirits.

Scorch / Ron
Ron was introduced around the time when Gou was introduced, but only to Mele, he manipulated her. He revealed himself to Rio to introduce the GenJyuKen and way later to the Gekiranger. But his true form was not revealed until the last episodes. Scorch has no human form, he is the leader of the Phantom Beasts. Ron killed Rageku, but Scorch and the other two killed her counterpart Jellica. Ron was a big player, he was a main big player and pulled everyone's strings. Ron was eternal, immortal and became very bored and wanted some excitement so his plot was to turn Rio to something like him, to cause havoc. Scorch was obedient to Dai Shi, he died three times, one big, two when Ron was sealed and third an original death. Ron's final multiple-headed dragon became Dai Shi's final form. 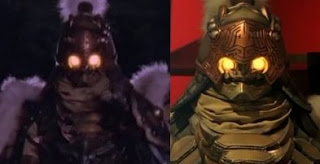 Snapper / Sanyo
Sanyo was Ron's lackey and coughed alot and said 'yo' alot. He revealed stuff Ron didn't want him to. Sanyo's power was of the Basilisk but Snapper is of the more obvious Snapping Turtle of his appearance. Snapper seems more intimidating, but he was much more of Scorch's lackey and Mele/Camille did overcome Sanyo/Snapper. Snapper was killed by the Rangers and Camille. Sanyo was sucked up by Ron to make his final form. 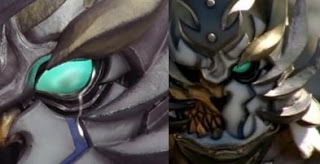 Whiger / Suugu
Suugu did not speak at all because he was just the GekiWaza or power of Dan, the father of Jan. He was used by Ron to lure Rio into GenJyuKen. This was because Rio had a rivarly with Dan and he killed Dan or he thought he did. He had no mind, but he slowly came to care for Dan's son. He asked Jan to kill him and then Dan was free. Dan's power was of the White Tiger but Suugu was the Chimera, Whiger's power is of the White Tiger. The name Whiger is just the combination of the two words. Whiger was given the task of stealing Casey's tiger spirit, he was banished by Dai Shi when not being able to defeat Casey and then helped Casey when he helped him and faded away.

Posted by Lavender Ranger at 11:50 PM

You forgot the biggest difference between Camille and Mele: Mele is *so* bubbly and hyper and on a permanent sugar rush. *Marah* would tell her to tone it down if they met. Camille is much more of a "femme fatale." She's sly, subtle. (That's also why the romance subplot seemed underplayed: there's nothing about Mele that's *not* done in a shouted-from-the-rooftops manner, but Camille has a very different personality.)

Mele might be "bubbly" and all, but she would kick Camille's and Marah's combnined butts.

Also, Mele is not that bubbly compared to "Marah"