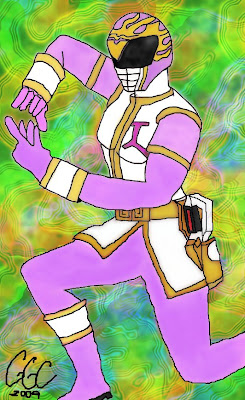 For years I have been in the Power Rangers/Super Sentai fandom since 1995 or so and I have not had a successful alias, avatar, or screenname. I would usually go by first name (Gerald) but most people I know have successful screenames that stick like poweranimals or dukemon22. Names I have had are GoBlue (GoGoFive), MegaSliver (Mispelling Mega Silver), etc. Finally, I have picked one and I think I am sticking with it. Lavender Ranger has a colorful background (pun not intended), I like purple and violet but Lavender is unique; plus that only one Violet Ranger exists.
Many people know I am gay, maybe some don't even know, doesn't matter. Lavender is a synonym used for the original gay liberation movement which began in 1969 is referring to the movement as the lavender revolution. The Lavender Menace was a group of lesbian radical feminists formed to protest the exclusion of lesbians and lesbian issues from the feminist movement at the Second Congress to Unite Women in 1970. Before the word 'Gay' (which is a pretty new slang term) was used for Homosexual, 'Lavender' was used before that. For Example on "The Simpsons," Grampa asks Raul "Are you going to get lavender on me?" in the 2004 15th season episode "Catch 'Em if You Can." It is an accurate use. The best part is that this is not that well-known these days. I am like, why didn't I think about this before?

Above is my rendition of a Lavender Dairanger, based on the mythical creature Hippogriff. She is female because there is never enough female Rangers.

Posted by Lavender Ranger at 5:38 PM

Hey there! Wow, it's nice to know that I'm not the only queer in the Sentai/PR fandom. :D
To tell you the truth, I thought you were a girl at first. xD And I think your username is pretty clever. Though I as a lesbian knew what lavender is slang for, I didn't even put 2 and 2 together when I saw your username. lololol
Anyway, good to see that such a prominent member of the fandom is gay like me. ^_^
-AmandaBear

Thank you, I'm loud and proud. I assume your username is not like mine because I never heard of a Lesbian Bear.