UPDATED 7/9/10
Unlike Power Rangers in the early days, actors who used to play heroes in one Super Sentai series will make cameo or appear in another series years later as another character. They rarely ever play the same character other than in teamup specials because it is not in the same 'universe.' The actors that have reprised their roles are in teamup specials and also Gaoranger vs. Super Sentai (Red Falcon, Mega Pink, Ginga Blue, Go Yellow, and Big One) and Boukenger vs. Super Sentai (Hurricane Blue, AbareBlack, DekaBreak, MagiYellow, and MagiShine).

Hisashi Sakai
He played a young Burai in Zyuranger and then played Kou in Kibaranger, so technically he is the only actor who has played two Sixth Rangers. 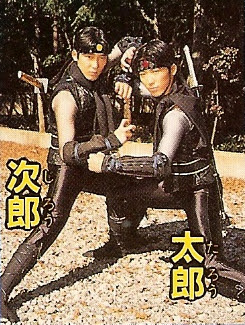 
2002 Hurricanger
Many former Rangers guested on this show as Shurikenger.

Kunihiko Oshiba (MegaRed)
He played a bumbling dectective in Episode 23 and was the first guy that Shurikenger took his image.

Ryuichiro Nishioka (OhRed)
In Ep 24, Shurikenger takes the form of this drum player.

Masaya Matsukaze (MegaBlue)
Even though he didn't play a hottie in Megaranger, he was sure a hunk in this episode. He played an idol that was knocked out and Shurikenger took his form and fell in a love spell for Nanami (Blue) in ep26.

Yoshihiro Masujima (Blue Racer from Carranger)
In Episode 34, Shurikenger took the image of this man Wendinu had a crush on.

Tomohide Koizumi/Shuhei Izumi (Time Yellow)
Shurikenger disguised as this ramen eater and the Hurricanger imagined him in other jobs in Episode 39. He was the only former yellow ranger to play Shurikenger.

Machiko Soga (Bandora and others)
Even though not a Ranger, she was a good guy for the first time in Magiranger as Magigel.

Takeru Shibaki (Gao Blue from Gaoranger)
He guested as a Ragi, a boy of an ancient civilization turned into a Jaryuu creature.

Eri Tanaka (MegaYellow from Megaranger) and Keisuke Tsuchiya (KirinRanger from Dairanger)
They guest starred as BoukenYellow's ancient parents, it was appropriate since both actors were once Yellow Rangers. 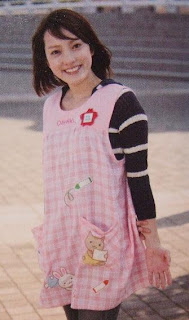 Kayoko Shibata (Matsuri Tastsumi/GoPink from GoGoV)
Well not technically a Ranger per say, she was Seig-Jenne in the GoGoV movie. Oops! I thought she was Sieg-Jenne but it was GoPink!!!!! My Bad. Her role wasn't much in Shinkenger, just a school teacher. She didn't really contribute much to the plot but had two scenes with ShinkenRed.

Yousuke Ito (Sen-Chan from Dekaranger) recently played Magis in a flashback in Goseiger. 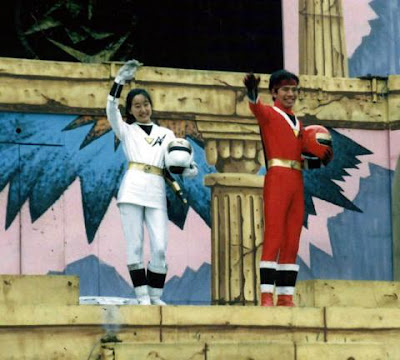 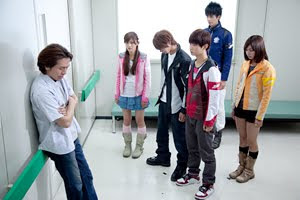 Also, the producers have been careful not to pick actors that would have to play their former Ranger character in a teamup. Notice that none of the former male Heroes (Big One, GingaBlue, or GoYellow) in "Gaoranger Vs. Super Sentai" were in Hurricanger as Shurikenger. And none of the former Heroes in "Boukenger Vs. Super Sentai (Hurricane Blue, AbareBlack, DekaBreak, MagiYellow, and MagiShine) appeared in Boukenger as another character. Also, actors who appeared in teamups didn't appear in the next year series as another character.

Oh, I was also told by one of the many Anonymous comment leavers that Jyunichi Haruta/GoggleBlack from Goggle V also starred in Dynaman as DynaBlack. Plus, Kenji Oba played Battle Kenya in Battle Fever J & DenjiBlue in Denjiman.
More covered by Sean Akizuki here
Posted by Lavender Ranger at 11:27 PM

Uh, the teacher from Shinkenger was actually Kayoko Shibata (a.k.a. Monika Sekiguchi), who played Matsuri Tatsumi/GoPink.

Not true. The guy who played Tyzon in OO played a bully named Derek in Dino Thunder. and the voice actor for Kruger in SPD became the Solaris Knight in Mystic Force.

Honey, i'm talking about Super Sentai, not Power Rangers. I might do that next.

Don't forget that Jyunichi Haruta/GoggleBlack from Goggle V also starred in Dynaman as DynaBlack even though they are different characters.

I think it also should be noted that the same guy who played Tuxedo Mask in PGSM also played Kamen Rider Ibuki in Hibiki.

Mark, yeah I should do a Kamen Rider one because there are some Kamen Rider actors that cross-overed to Super Sentai like Go-On Gold.

the girl who played Umeko or dekapink has also played in go-onger the movie. her role was female comrade of Retstaka

Burai from Zyuranger played another role in an earlier Sentai series (I believe it was Changeman).

The guy who played Retsutaka was Kento Handa AKA Takumi Inui (Kamen rider 555).

Better add Teruaki Ogawa (Sasuke/NinjaRed) and Satomi Hirose (Tsuruhime/NinjaWhite) to the list, as they recently appeared in Goeseiger Epic 19 playing the parents of a kidnapped child.

Also, the actor who played BoukenSilver in Boukenger later played KyoryuGray and his successor in Kyoryuger.