I have been wanting to cover how many times McDonalds have had toys of Power Rangers or even the other Saban shows. But it's hard to find pictures. I have some of these items but it will take some time to take good pictures of them. 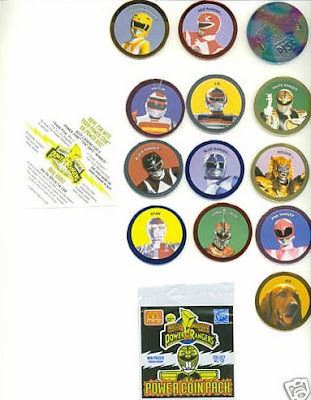 1994
Power Rangers and VR Troopers "Power Coin Pack" Pogs
I was so excited when this came out. I remember passing by my local Mcdonalds at the gas station in front of it and seeing a poster of the White Ranger on the drive-thru wall. I got a pack and I remember I got the White Ranger and the Blue Ranger, I think I also got the Red Ranger and Goldar, but I lost them, so I don't got them anymore. I know I didn't get the VR Troopers. This was the closest thing to a VR Trooper/Power Ranger teamup. There were 13 in all: Red Ranger, Yellow Ranger, Blue Ranger, Black Ranger, Pink Ranger, White Ranger, Lord Zedd, Goldar, Ryan, JB, Katilin, and Jeb. These came out in 1994 but I don't remember what month, it for sure happened in the Fall/Autumn. 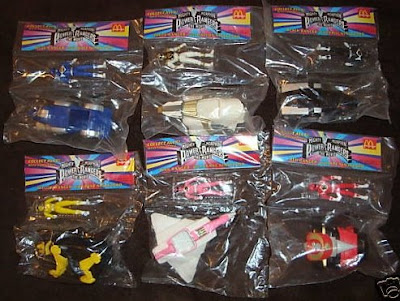 Summer 1995
Mighty Morphin Power Rangers The Movie
The most popular of the Power Ranger toys, the ones from the movie. In the regular Happy Meal, you could get a whistle signal (I still have it, its black and clunky), a communicator, a Power Buckle with the infamous Ninja Coins (but they were three and double-sided), and a blue whistle. If you paid for them, you could get a Ranger and their Ninja Zord. The Rangers were modeled after their Movie suits. I still have Red, Yellow, Black and Blue. I never got Pink (by the time I could, McDonalds no longer had them) but my cousin did get White. I couldn't find the commercial but I remember there were two. I think I remember one of a boy and his father being stopped by the White Ranger and his Falconzord.
UPDATED JULY 24, 2009 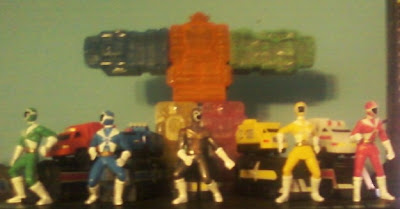 May 2000
Power Rangers Lightspeed Rescue
When they came out, I actually tracked them all down and got them all except for the Red Ranger. This was awesome, they all came separately. There was the Rescue Zords, Rescue Rails, and Rangers, in all there was 16 toys: Red Ranger, Yellow Ranger, Blue Ranger, Green Ranger, Pink Ranger, Titanium Ranger, Red zord, Yellow zord, Blue zord, Green zord, Pink zord, Red rail, Yellow rail, Blue rail, Green rail, and Pink rail. The zords could fit in the rails. The Rangers came in humanoid zord-like cases that merged together to make one big Megazord. The Red or Titanium case could make the head, so I was fine without the Red one. The Yellow Ranger had a skirt, where in the show, she didn't have one because the yellow one was a guy in the original series Kyukyu Sentai GoGoFive. I remember more or less where I got most of them. I remember the commercial too, which I couldn't find, it had all the six Rangers. 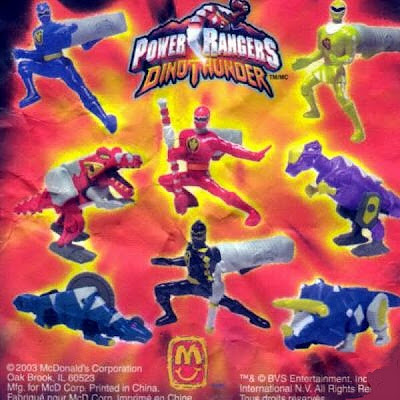 December 2003
Power Rangers Dino Thunder
These toys came out before Power Rangers Dino Thunder came out and I hated them. They were not possable and were akward. They were part of the Boys happy meals, while the Girls one was Disney Princesses. I only got the Black Ranger one. There was 8: Red Ranger, Blue Ranger, Yellow Ranger, Black Ranger, Tyranno, Tricera, Dimetrozord, and Celphazord. It is interesting they had the female Yellow Ranger, as it was the Boys Line, I am not complaining, I think it's cool. 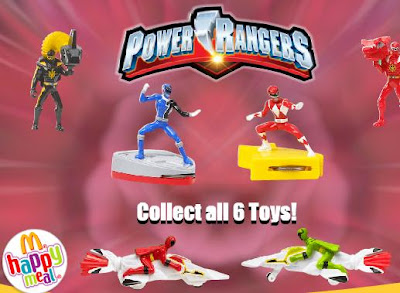 December 2005
Power Rangers Generations
The last one and they were pretty cool that they mixed the generations. I still have the two pog launchers. In fact, I have two of the Blue ones. There were 6: Dino Thunder Red and Black Rangers, Mystice Force Green and Red Rangers, Mighty Morphin Red Ranger Pog Launcher and SPD Blue Ranger Pog Launcher. The commercial had the Mighty Morphin Red Ranger and Mystic Force Green Ranger. This was part of the Boys line, the Girls toys were W.I.T.C.H. 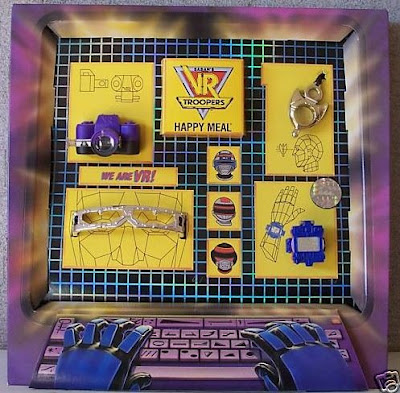 1995 or 1996?
VR Troopers
I don't know what year this came out, I didn't get these. There was 4: Virtualizer, the communciation device-- both which didn't have regular toys, a camera and virtual glasses. This had to be in season two of VR Troopers because it has a drawing of Ryan's second VR suit. 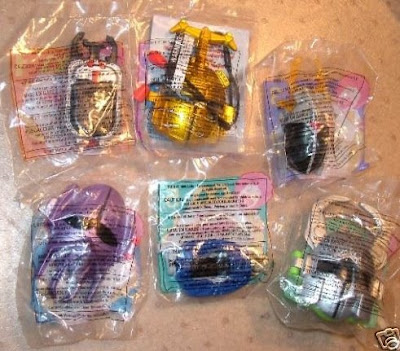 1997
Beetleborgs Metallix
I never got these either. There was 6: the Gold Chromium Borg, Titanium Silver Borg, Platinum Purple Borg, Thunder Stinger, and two Beetle Bonders. The borg heads opened but I don't know what was inside. I remember this commercial as well for some reason but couldn't find it online.
This was all in the United States, it varied internationally.

Posted by Lavender Ranger at 11:56 PM

I drove one of those Dickie Dee ice cream bikes one summer, and we gave away MMPR Movie pogs as a promotion. I scored the entire collection, and I'm kinda bummed that I don't have them anymore.

Not that they'd be worth a lot of money, but for nostalgia purposes...?

I just made a recent entry about one of the Beetleborgs McDonald's Toys right here (that is if you're interested, it's mostly just pictures): http://community.livejournal.com/beetleborgsfans/11705.html

Here in Bulgaria we've had some PR toys that you guys didn't from what I can see...

We had a "Fox Kids" themed line, one of the toys in which was a Power Rangers Ninja Storm CD (it had a flash game, wallpapers, screensaver and theme-song) with a spinner and another spinner with a glow-in-the-dark Red Wind ranger inside.

Next, we had 4 Dino Thunder toys - all morphers: Brachio Morper - it shoots out a disc with the Red Ranger on it and makes sounds, Tyranno Morpher, which came with 3 relief discs (Red,Blue and Yellow Rangers) and when you put them in the morpher a light turns on so you can see the picture clearly. It could also shoot out the discs.
Ptera Morpher I don't own, but as far as I remember it had a mirror. Unknown morpher (doesn't really look like a dino) that had a lentricular Red Ranger pic on it.

And SPD toys, again 4 of them - Handsfree with extendable mic and antenna, foldable binoculars with optional Red & Green lenses, Backpack/Door alarm and a Double-sided wrist badge that makes various "WHOOSH!" sounds when you move your arm.