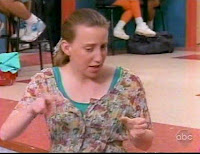 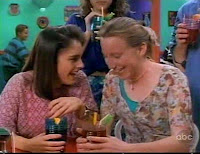 "Different Drum"
Rita sends down Gnarly Gnome to hypnotize Kimberly's dance aerobics students and kidnap them, luckily Kimberly's hearing-impaired friend Melissa helps them out. I always love this episode, let me let you guys on a little secret, my older sister is hearing-impaired herself, her kids and grand-child can hear. The whole family knows sign-language. This episode has not aired in many years, it did not air in ABC Family. For some reason, the Pink Ranger was silver in some scenes of the MMPR episode and how they called the weapons by different names (Cosmic Cannon, Battle Bow, Dino Daggers, Mighty Lance). And in a rare instance, the monster was both destroyed by the weapons and the zords, which commonly happens now but didn't much back in those days. 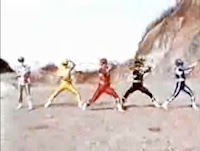 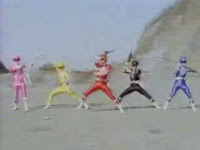 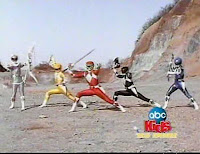 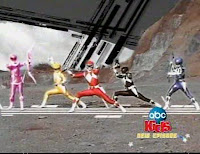 [Left: Silver Kimberly remains in MMPR revision; Right: Only for one spot, Kimberly is completely Pink.] 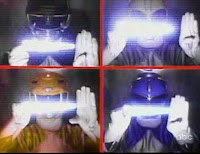 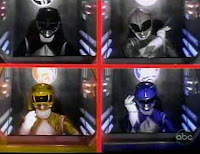 In some parts, the silver is changed to pink but in some scenes, it still remains silver. The alternate names remain as well. I watched the original Zyuranger episode on YouTube today and the PteraRanger (pink) is not silver but pink, so it is some weird mystery. It could be that the Beta or VHS tape the Saban company got was damaged and all pink came out grey. In the end of the ep, Jason attempts signing, Kimberly says he says that her dog smells. But in reality, he says Pet smells. The sign of Dog is a pat at the hip and the calling command sign. But some of the ASL are different. There are about two or three different signs for stand, for example. 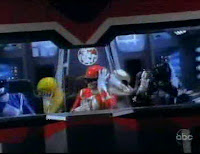 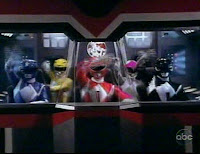 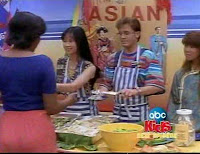 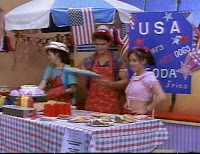 "Food Fight"
The school has a food festival inside the youth center, Rita sends the Pudgy Pig to eat everything. This episode first aired a Saturday a week after the first episode, two days before the first episode aired along with other episodes on weekdays. But in order, Food Fight is the sixth episode. Pudgy Pig is still pretty popular monster, even though he is the most ridiculous. 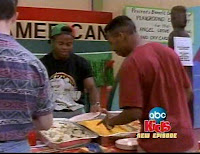 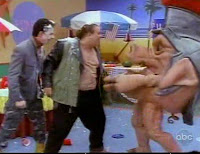 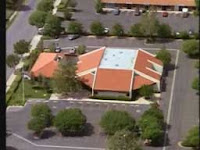 Establishing shots are cut out. The episode title was on one of these. 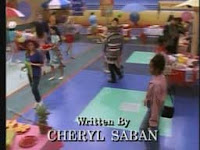 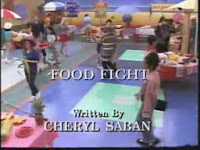 So the Episode Title was moved to this shot, which was not originally there. New commercial breaks were edited in as well.
Next week only one episode airs and it is "Big Sisters" and then on Saturday the 30th of January it is "Switching Places."

Posted by Lavender Ranger at 5:23 AM

I wanna know whose idea it was to put whole sections for America and Mexico, and then put Trini and Billy in "Asia".

Mexico? Do you think the sign behind Zack says Mexico? It says African-American. I really wonder what food was there.