WARNING: My DVR can only record the non HD channels and ABC was all fuzzy with spots. So sorry for the crappy images. I mixed in some from the ep guide. 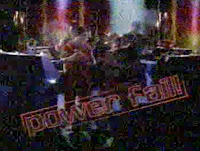 Summary:
A lot happens in this episode, the Rangers try to morph-they can't. Goldar rampages through the city. Bulk and Skull go into a bus. Billy fixes the morphers and Goldar takes the bus and asks the Rangers to surrender. They refuse so Goldar heads to the beach where the Rangers see Rita and Scorpina. Meanwhile, Green Ranger goes to the Command Center to finish what he started. The bus is dropped, the Megazord catches it. Goldar and Scorpina fight the Megazord as the Eclipse starts. Alpha manages to hold the Green Ranger in a force-field but Rita teleports him out to fight the Megazord and it goes down. The Rangers mourn the zords as they find out Tommy is the Green Ranger.

Above left is the exaggerated acting of the American Power Ranger suit actors back in the day. Trini even utters an aloof 'uh-no' and the stunt person does a funny movement. Above right, I couldn't believe my eyes. Rita and Scorpina in American footage! When I first saw this as a kid, my mind was blown and I wondered why we couldn't see their faces. The people Saban put in these costumes probably didn't match how the original actresses looked. This footage was filmed to replace Zyuranger footage with the Battle Bikes. But they later allow it with "Calamity Kimberly," and the toys were available at the time so I don't know why they didn't use it. The first attempt of using the Zyuranger footage, the sword superimposed on new footage, again to get rid of the Battle Bikes.

Top left, must be the BEST shot this reversion has ever done. A giant mark appears behind Scorpina and it goes from black to red. I WONDER what it is suppose to represent. Hmm... It splatters and it's red. I am surprised it went to air! Top right, uh... you edit this and hear it every episode 'Power Lance!' and no, you put Power Sword on Billy's bio. What I loved about the ending of the episode was that even though we knew who the Green Ranger was, the Rangers discovering it wasn't a bad and boring scene, it was suspenseful and impacting, they did a great job--especially having Tommy rotate slowly.

Posted by Lavender Ranger at 8:18 AM

Those aren't stunt people in the US footage of the Rangers on the beach. Those are the actual actors. There's a photo of them on the set, even.