I have been subscribed to TV Guide since I was 9, that was 19 years ago. In the Jan. 10-16, 2011 issue, they have a small excerpt in the Winter Preview of Children's Programming highlight the Power Rangers. 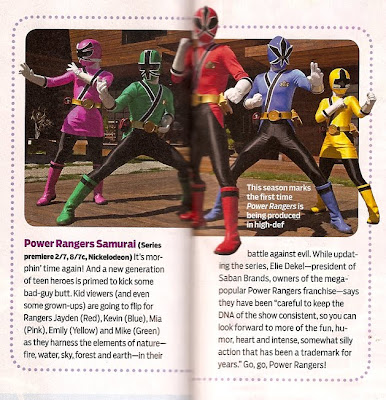 It is a pretty generic snippet but at least it does acknowledge grown-up viewers like the show too. It does confirm it will be premiering February 7th at 8/7 central. Apparently the show will be in high definition, just like Super Sentai (Super Sentai has been in HD since Boukenger in 2006, those seasons that were adapted would cut much of the footage out to adhere to old 4:3 video ratio). It also has the same quote from Elie Dekel we have been seeing online lately. 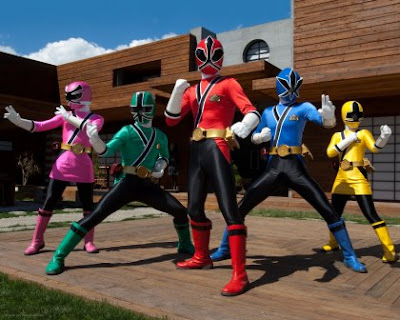 TV Guide was at first kind to Power Rangers, defending charges that it was too violent back in 1993. They were the first magazine to clarify why Yellow Ranger had no skirt. Back when, they highlighted Tommy loosing his powers and becoming the White Rangers as one of the best plot twists of 1994 (I don't have picture, sorry). But, later on they did reviews for Turbo and Lost Galaxy, with not as much enthusiasm. I remember them calling Lost Galaxy's music 'trying to be like Star Trek.'
Posted by Lavender Ranger at 2:36 PM

It's great that "Samurai"'s being produced in HD, since Sentai's been doing so for years. Hopefully aspect ratio will follow suit. :)

Me too, Chynna. Holy lord, I hadn't even given that thought.

I guess that's one of the main reasons why I don't like 90's PR. It was all grainy and not in HD.