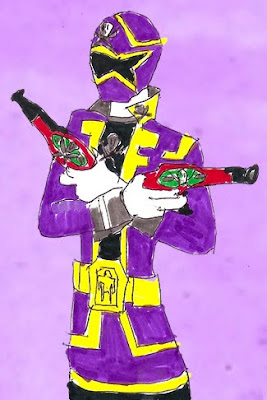 I've been planning this for a while and decided to sit down and draw it. This is my character Gokai Lavender (ゴーカイラベンダー), a mysterious Gokaiger that has keys that the others simply do not have. We'll see if there will be actual Ranger Keys on the past heroes portrayed below (DekaBright, MagiMother, DekaSwan, etc.) in the actual series, but I decided to play with a little. Yes, I know I draw like a kid and write worse. I was going to make her guns another color other than red, but I forgot and was already coring them in red. Also her Gokai symbol is different, it has a mouth too, in homage to the Real Ghostbusters ghost symbol. 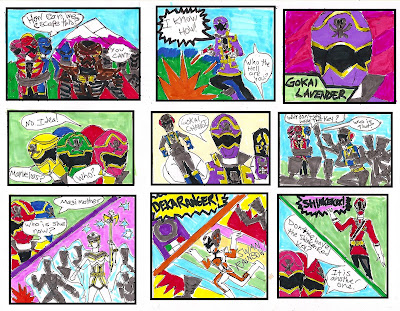 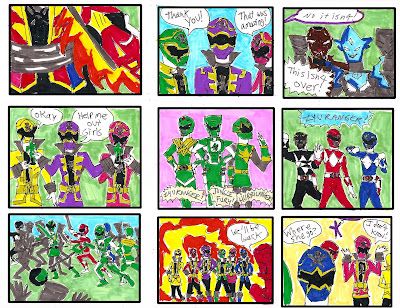 I know someone will ask me about my fan film, this is all I will say about it, it is not finished filming and most likely will try this summer when I have free time. I'll let you guys know when there is any new developments.
Posted by Lavender Ranger at 12:40 PM

I love your fan fiction comic, it actually has a story in it. Maybe you can do more of it? I like to read it.

yay! somebody liked my story! I was thinking the rope around them is a restrictive, they move more, the tighter it gets. And only the Daizanto can cut through it.

that sounds great, it can work

Maybe will be a hero that transforms in the other warriors

That was a great story !

Maybe... but I doubt it'll include the JF Spirit Rangers, lol!

Uh, like I said, I'm having fun with it. It's not suppose to be canon, come on, I have in possession of the dragon ranger and shurikenger ranger keys.

Here's my toku persona I made up!
http://chemosynthesis.deviantart.com/gallery/#/d350e0y

thank you! it's awesome!

in a dark world without sentai, five heroes answer the call to continue the legacy.

behind the scenes of their crusade, exists elsewhere, a sixth hero of unknown origin. possessing new powers unique to her alone, she fights for justice from behind the scenes.