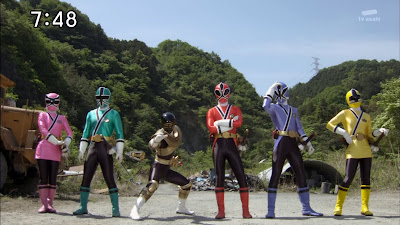 I know it is silly to call it a debate. I know, I know, 'it's just a show.' In Episode 18, GokaiSilver asks Captain Marvelous for a Sixth Ranger key with Kanji on it as they transformed into Shinkenger but he gave him the Kingranger key and then once Gai transformed, he realized there was a mistake, that he wanted to be Shinken Gold. Now, there is two arguments: One, in its raw Japanese states, us (including me) who don't understand Japanese thought he asked for a 'gold ranger' and this was a nod to Power Rangers Zeo where the King Ranger was called Gold Ranger. 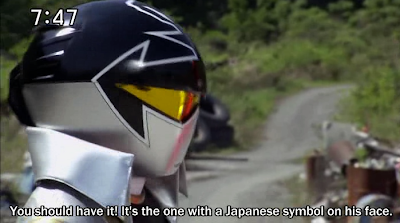 But in reality, he asked for the one with Kanji on it and Kingranger also had Kanji. Now in the boards, fans expressed surprise that they didn't know Kingranger had Kanji on his face. The symbol stands for 'King.' Hate to boast, but I've known this since 1999 where I told my High School Civics teacher Mrs. King the Kanji for King. Now, the second debate is how did Gai didn't notice it was Kingranger when he has to press the button with the actual Ranger's face on it to transform into that one. No one knows if let's say he puts in a Gao Silver key in and he presses the Shurikenger key if he'll transform or what. 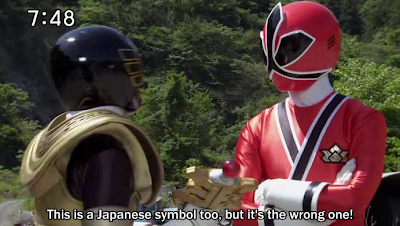 Above two screen captures are from the subtitles done by Grownups in Spandex.

redryu11 of rangerboard:
Marvelous gave Gai the Kingranger key because Gai asked for a ranger with a Kanji on his head, Makes sense. Gai was so excited to get a key and didn't actually check, Makes sense. Gai pushing the Kingranger button, doesn't make sense. I mean he's a fanboy, you'd think he would make sure he pushed the right button, Shinkengold, instead of the wrong button.

Ninja Sheikah of rangerboard:
I think Gai just got overly excited. He seen the King Ranger key and pressed the button. He probably just got caught up in the moment. 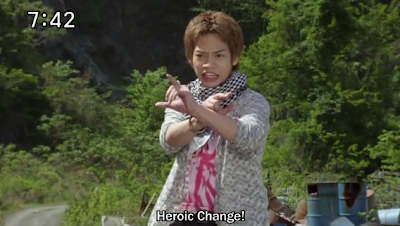 But earlier in that same episode, he went to face the Zangyack and did the henshin movement and totally forgot he didn't have his Gokai Cellular or Ranger Key. So he can be a little careless. Anyhoo, yes i know, 'it's just a show.' But it's fun to debate and watch as we love the shows so much.
Posted by Lavender Ranger at 5:08 PM

I like to think is a reference to the initial reactions of the Shinkenger helmets being like the Ohranger helmets. But is obviously a kanji joke.

Probably a combination of a kanji joke and Gai being way excited. I won't lie, I thought it was a two Gold Ranger joke (watched the RAW). Maybe it was also meant as a nod for Power Rangers as well. If we get Kiba Ranger with the Zyuranger, I'm calling this a double edge joke.

you would think with him being a Super Sentai fanboy he'd know who the 6th rangers are.

i dont think it was meant to be a power rangers reference...i agree with the others that he was overly excited and got caught in the moment and didnt really care as to which button he was pressing...he even said stuff about the King Specter after he transformed...but then he realized that ShinkenGold is not the owner of the King Specter... IMO

this is base on how one see this episode; Did you guys realize that Marvelous/Gokai Red give the key with his hand closed? this indicate something; as well as the transforming sequence of Gai, which is fast and the just said what the suit was...but Gai did notice quickly after his transformation which is logic for me

I think he was excited and did not look at the key, but pressed the ShinkenGold button. I would say it is safe to assume that the Key is ultimately what causes Silver to change into the specific Warrior, with the button mainly starting the process.

Well Kin is one of the readings for Gold...actually metal so there is probably some misunderstanding LOL.

Whatever the reason, I thank them for making that scene. I laughed for like a minute after seeing it. Haven't had this much fun with an episode since Jetman 11.

They should've bring back Lisa Wada as Dorin. Dorin would've been present and asked "Riki" about what was going on and if he's really the King Ranger. She didn't know that the KingRanger was actually GoukaiShirubaa (Silver Heroic Ranger) in disguise! But, if GoukaiShirubaa summoned the King Pyramider, it should've been the Goukai Machines instead of Chouriki Mobiles and Red Puncher that will atop of the Pyramid!