Hey guys, henshin0 here saying "ORE SANJOU!!!". Anyways, I'm sure I shouldn't talk about my personal life on this blog, but Israel was fantastic, especially when I tell you a few toku-lated things I found about it. Power Rangers Samurai is pretty popular there....really popular. One day, I was channel surfing in a hotel in Jeruselem, and find PRS dubbed and subbed in Hebrew. When you spend a year hanging out with Paul Shrier, watching his band perform, listening to his anecdotes about riding a motorcycle with Narvy, and other real-life crazy adventures of Paul and Jason, it is kinda surprising to see your friend lecturing Felix Ryan the ways of the samurai in Hebrew. I'd prove it with a photo or video, but my phone was dead (sorry guys). But what really interested me is Power Rangers and (wait for it) Kamen Rider are both popular there, but ironically, no one has ever heard of Super Sentai. The Israeli soldiers I hung out with were all fans of Blade, Kabuto, OOO, and Den-O, and much like me, hated the the first five minutes of 2010 Movie War.
That isn't the only thing that caught my toku-related attention. In addition to finding venders with bootleg copies of 7-Fighting Demons dubbed in Hebrew, but I constantly find the below poster all over Tela Aviv. Note, it is just a flyer for a sticker promo, but what an interesting cross-over it would make: 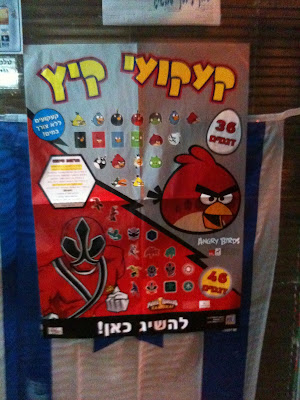 POWER RANGERS SAMURAI vs ANGRY BIRDS
Being back, I just had to check out jetfusion to catch up on gokai-ooo, where I stumbled upon a video leaked from a press conference. The video includes a press-battle between Fourze and the red-monster-guy, followed by a video of the extended trailer of the show. The trailer shows Fourze holding and using four switches in human and rider forms respectively, the cliques, and some other stuff. Anyways, I'm sure you're bored now with my anecdote, and want to get on to the trailer, so here it is:
http://www.jefusion.com/2011/07/kamen-rider-fourze-leaked-trailer.html
What else I found on JF is confirmation of 4's (my abridged name for fourze) to cameo in the OOO movie, and for there to be a 2012 cross-film. So here is my prediction of what's to come based on patterns from the last two years (take with a grain of salt):
>Before fighting the main villain in OOO movie, OOO will face a lesser movie villain, but will be interrupted by a brief arrival of 4's, who will also defeat that lesser villain.
>Given the previous titles given to year-end team ups (war and core), the movie will likely be called 2012 Soar (because it rhymes with the above and it's appropriate for 4's motif.
>The OOO side will feature a new combo and/or new form for birth and/or new rider (most likely options 1 and 3)
>The 4's side will feature a mid form (like fang-joker and tajadol)
>Either during the 4's side or in the Soar-cross, the second rider will be revealed (like accel and birth)
>Next spring, there might be another den-o film that may include 4's (and if it does, it might take place in space)
---Again, these are just predictions based on patterns from the last two years, so don't take them seriously, regardless of how ironic it would be if I was completely correct with them. But seriously, the chances are astronomical, so don't.
Posted by henshin0 at 1:01 AM

From what I understand, Kamen Rider is dubbed and subbed there, so shouldn't anyone in Israel slightly confused that Tori Matsuzaka("from KR Decade") is wearing the same suit as Alex Heartman?

I actually asked them that. They actually skipped those two episodes. They didn't air the "previously" unless it's the second part of a world, and didnt air "next time" unless it's the part one. They weren't airing decade when I was there. They just finished W. My guess they used RX world change footage at the end of diend world. Now that I think about it, shinkenger no sekai was pretty much a filler.

I live in Israel and I'm a soldier, but I've never met enyone here who watch kamen rider or super sentai.
Power rangers was really famous when I was a kid and there is a larage anime/manga fans community here.
You came to Israel with a special program where you meet Israeli soldier and you all travel across the country for a weeek or more?

I don't know what to tell you, but the soldiers I met said they were watching it. They even knew about the characters and rider forms and stuff. maybe they watched it online. I barely had any time to watch tv in the first place, but in the few moments I did, there was samurai dubbed in hebrew. If the soldiers didn't talk about watching KR, I wouldn't have brought it up, because I would say things that are 100% untrue. They said they watched KR, and I thought that was an interesting thing to bring up. they honestly never heard of super sentai, so I said that they didn't watch sentai, because you can't say you watch a show you never heard of. many Amercans watch Jersey Shore, but I don't, In fact I only know it exists because I watch SNL, and they made a joke about it, but does that mean that just because my one account of not watching JS, there aren't people who watch it? see what I mean?

I just was excited to hread your words about it and I'm happy that I'm not the only one who knows about kamen rider, it's just that I didn't meet anyone yet hehe... I hope you enjoyed your visit and thank you for the post =D

i live in Israel and i watch Super Sentai and Kamen rider (btw, kamen rider isn't airing in Israel (unfortunately))

Haim saban is from Israel so I'm not surprised Power rangers has been dubbed so quickly.