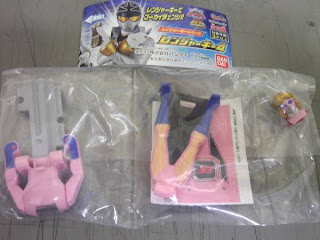 When I first heard the Miss America key was coming out with Gasphon Series 4, I thought it was silly. I'm personally not crazy about the suits of Battle Fever J but once I saw the key, I found it fascinaitng as they actually sculpted her hair and all unique it looks. But it actually turns out to be a rare key because they only sell it with the whole set. It is now highly sought. It is not Marvel related, as Marvel comics had some hand in her creation but because very little are being made. A bid online (Yahoo! Japan) is currently going for 910 yen (12 bidders so far), that is about $11.73 in American and Canadian currency and 7.40 pounds (UK). It ends on the 15th of September in Japan. Now why would anyone want a key with a horrid human face and peach 'skin' legs? Because of its cheesy-ness and also, there is not much Pink keys right now, soon but maybe not soon enough. 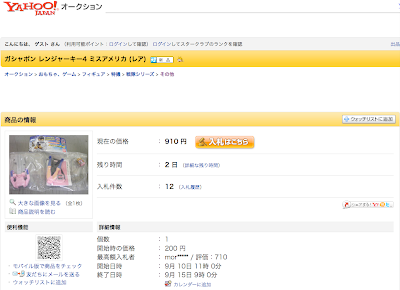 Chichoc of Rangerboard says:
"So the Gaoranger set costs 1,7K Yen (12 keys) without the "rare key", in this case Miss America, the complete set costs 3,1K (13 keys). I was willing to buy the Gaoranger set, but I also wanted MissAmerica and it bothers me to pay almost double for one single key..."

I usually get a key for 200 to 400 yen and I bid with Celga, they do the bid with Japan and with shipping and their fees, for about one key it adds up to around (more or less) 13 bucks (I say more or less because it is better to ship a bunch of things at once and I haven't asked to ship just yet). So if tried bidding for this one, it might cost me 22 bucks.
http://page10.auctions.yahoo.co.jp/jp/auction/m92509357
(Link expires September 15) 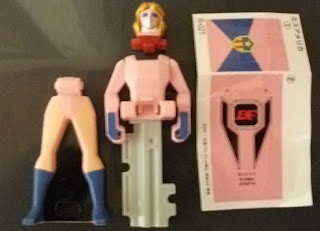 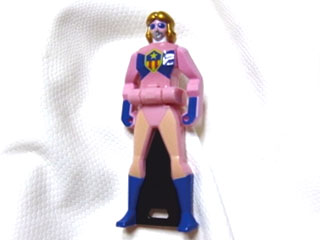 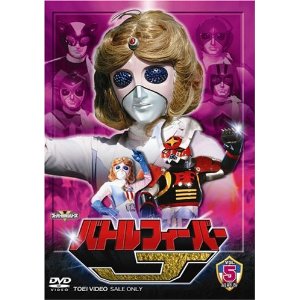 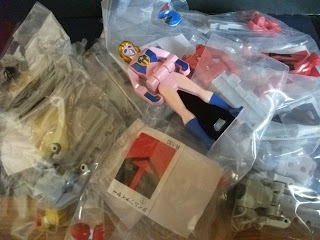 Posted by Lavender Ranger at 11:31 PM

At least Miss America is one of the most unique and most creative looking suits.

And I thought it was due to Miss America coming from Marvel...

nah its because it is one of the rare keys, it is like the Rita chase figures, they only make a few.