In response to the quality of the McDonalds Toys of Power Rangers Samurai, I was thinking of an impossible idea. Impossible because it might not happen because of the quality and the amount of toys. They did recently have 16 Smurf toys. Recently they have toys split into girls and boys, 8 each. If Gokaiger gets adapted into Power Rangers, I don't think this would happen. I thought this would just be fun to do. I did the six Pirates and tried to do one key per team, which was hard. I also tried to make the keys simple as possible. Oh the thing is that they are key chains. 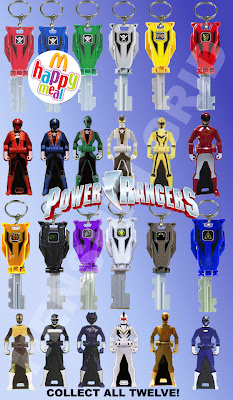 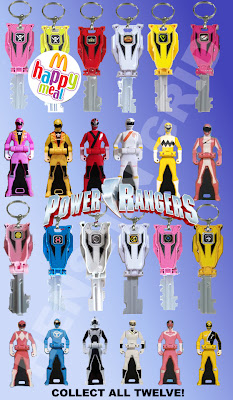 For the Titanium Ranger, I used a fan made key I didn't make. I wanted to use a Gold Ranger from RPM or Samurai, but I already had RPM Silver and female Red Samurai Ranger. Some key grooves are the real ones from the Deluxe or Gasphon Keys, some I reused from another one, so they aren't all accurate. Some I just pasted the logo on a key I changed the color to. For example, the Pink MMPR key, I used Miss America's Key.

Here are the ones I wanted to use but traded for other colors. 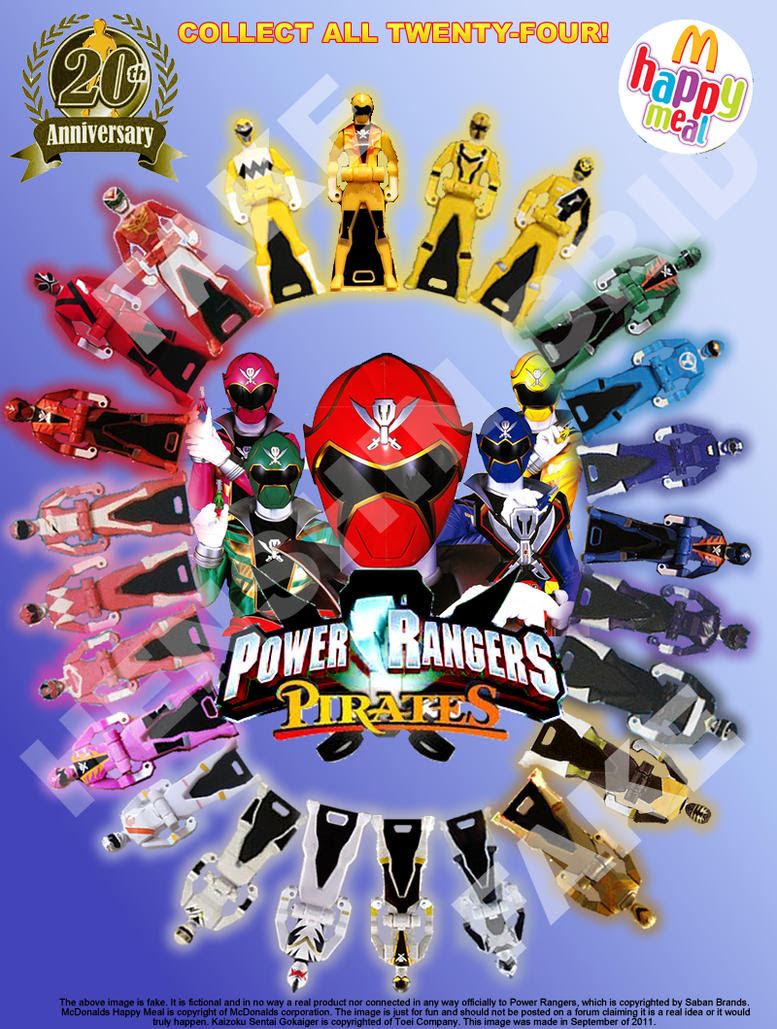 I just had fun doing this! Someone else made the logo, I did not.
Posted by Lavender Ranger at 12:18 AM

right now in mcdonalds japan, they have xron wars toys for boys, and what ever that other anime is during super hero time for girls, but before this, they had gokaiger dice-o cards in a happy meal

That would be a great idea, which is why it will never happen.

Actually, once I think McDonalds did something for the 100th anniversary of Disney, and there were 100 toys.

That is an awesome idea! Too bad we can only dream for this to happen.

If this were true, I think fans would go crzy to collect these, esp. if they came out with a MMPR Green Ranger key.

Were the colors you chose to represent each team just random?

The colors were not random. I wanted to represent every team and it is hard to do every color too. With the boys, I tried doing every color they have done: yellow, gold, silver, black, violet, and white. And of course I wanted to show off Titanium. I originally planned 20 keys but when I realized some teams were left out, I added Gosei Red and Justin.

As for the girls, it was hard since they don't have a variety of colors when it comes tot he actual keys, not the transformations. Of course I had to put the first female Red Ranger. And a female blue---I've mention before how I had only Mystic Force and Ninja Storm to choose from, it was a maze. I wanted Aquitar Yellow, switch and etc.

Originally I ended up with too many yellows but now that I look at it, I have too many pinks and should had one more red. Oh well. It's a fan thing.

I wish the gender graph between blue and yellow was more even like it used to be. Sentai has been so unoriginal lately.