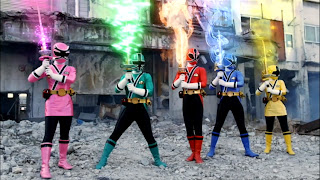 There was 16 episodes that aired from Feb 7 to June 4th, 'Boxed in' being the last. Nickelodeon now announced 5 weeks of new episodes, which includes 'Broken Dreams' and 'The Ultimate Deal' and probably 'Origins' (two parter). Oct 29th the fifth episode "Party Monsters" will air. I am not using RPM as an example as the last episodes aired in December but Jungle Fury's last episodes aired November 3rd and Lightspeed to Operation final episodes aired in November, meaning that these five episodes will probably be the last new episodes we will see this year. They might sneak one episode in November but most likely that will complete 21 (or 22) episodes for this year or 'season.' 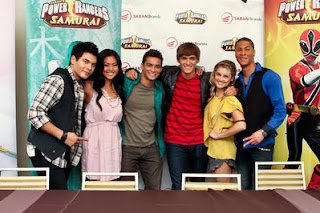 So like we feared, each season will be less than 40, we once thought it was 20 and 20 but it seems it will be 21. And the rest in 2012, the 'second season' of Power Rangers, which would be a rather short season. And we heard from the stunt group that they stopped shooting for Samurai, probably meaning they shot the two seasons already (On Twitter, Hector David and the others are back in New Zealand as of Sep 18 filming). Hector David and the cast said it wasn't the end, probably meaning we wouldn't see the rest of the series until the end of 2012. This 'two season' thing is probably being done in order to establish the foreign markets and Power Rangers merchandise (which we still haven't seen in abundance here in the United States). When 2 seasons and 40 episodes was announced, I figured it would be this way, noting how Nickelodeon handle "iCarly" and their other shows and 'seasons.' But the confusion was over the cast saying 'second season' and that most seasons last one year and the casting is occurring now for new Rangers. 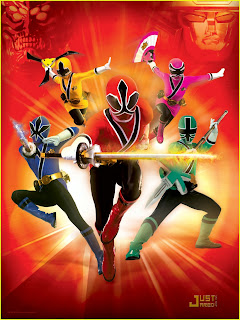 Most likely they will cast the new cast by the end of this year and start shooting in 2012 and probably air the new team season in 2013 using Goseiger and hopefully not be 20 episodes per year. 2013 is the 20th anniversary and we are hoping Gokaiger get adapted but if it would get adapted, most likely it would be in 2014 and not 2013. The 'two seasons' of Samurai and a new team in 2013, would lead fans to believe that Gokaiger will be skipped and the 2012 Sentai (yet to announced) being used for 2014. Now these are just speculations and not anything officially. I find this confusing because how can you have two seasons of 21 or 20 episodes and then in 2013 have a season of 40 episodes? Or will it be just be done like this every two year? I understand the need to establish something and get people used to it but this is ridiculous.  And they are taking forever with the merchandise, Disney didn't take this long with Ninja Storm. I guess the 2010 year off really screwed up negotiations because Mega Bloks and all those other products and the live tour is set to come out in 2012. And the Samurai toys---most PR toys came out in November and the Samurai toys snuck in a new or two before Christmas, not enough time for kids to put it on their lists. As for the Samurai cast, if they did indeed stop shooting, I am sure they will be plenty of public appearances, promos for Nick and maybe a movie this year.
Posted by Lavender Ranger at 6:34 PM

the episodes issues don't really bother me much.....

as long as the storyline is good and don't use too many 3D graphics....
that fine with me...