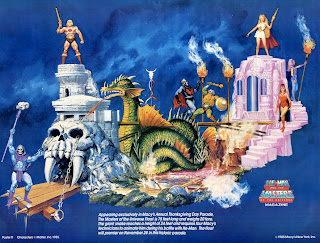 This is one of my favorite floats ever, the Masters of the Universe float, which combined the worlds of He-Man and She-Ra. When it went down for Macy's Thanksgivings Day in the 80's, they did a perfomance. The conceptual idea looks more ambitious and didn't look exactly like that in the final product. The bridge was bigger, the dragon is brighter and more downplayed and the pink Crustal Castle was on top of a hillside and looked more like a traditional castle than the toy version. 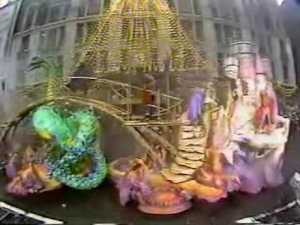 The final version had all the characters of both worlds fighting with each other and dancing around. The performance recorded for the Parade's televised version, the act wasn't well coordinated with some hiccups here and there and can be found on YouTub. 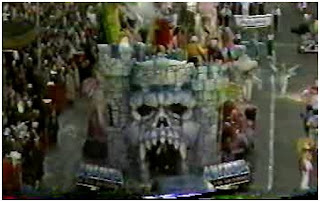 Anyway, this idea inspires me for a parade float for Power Rangers. Power Rangers Samurai are said to be in this year's Macy's Thanksgiving parade but it hasn't been announced yet in what form. Thee is no mention of a balloon and the balloons have already been announced, a balloon would had been cool and most likely the balloon would be a Red Ranger. Last year when the Samurai Rangers premiered, it was less fan-fae, it was just the five walking down the street with a small Earth balloon. 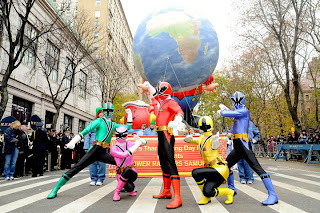 Even in their time in Walt Disney World, they didn't have a float. The Power Rangers never have had a float, so here is my idea... 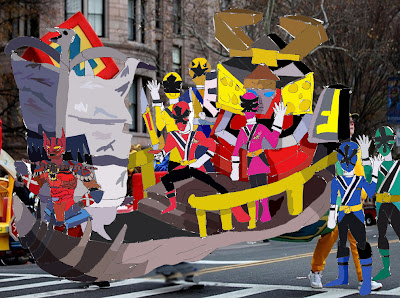