Let's see if it happens... We know we will get a blue one, we already had a 3-person black change. Like with Pink, Gai has no Blue to turn into, unless you count MagiShine. Also someone mentioned an all-gold change, I would say it would only count for 4 Gokaiger (MagiShine, Go-On Gold, Shinken Gold and Zuuban). let's see.... 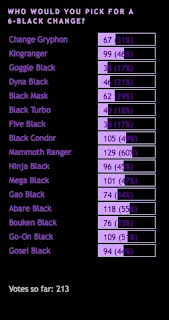 Who would you pick for a 6-Black Change?

Who would you pick for an 6-Blue Change?

Episode 45 will have MagiBlue, Timeblue, Goseiblue and Time Blue! Also AoRanger and Blue Dolphin; I forgot to put Ao Ranger in the poll and Blue Dolphin got 64 votes.
Posted by Lavender Ranger at 5:57 PM

Wow. The majority of your watchers just doesn't give **** on Goggle V, huh? They always get the lowest vote...