I've covered common locations used for Super Sentai or other Tokusatsu in Japan: here and here
All of this information is from the awesome wiki site Power Rangers Unpatched

"US" scenes in seasons 11 and onward were filmed in and around Auckland, New Zealand, which doubled for the following cities for Ninja Storm to Samurai.

The Sky Tower was a prominent feature in assorted city skylines: Blue Bay Harbor, Reefside, Newtech City, Briarwood, San Angeles, Ocean Bluff, Corinth and the Samurai city. The Sky Tower is an observation and telecommunications tower located on the corner of Victoria and Federal Streets in the Auckland CBD, Auckland City, New Zealand. 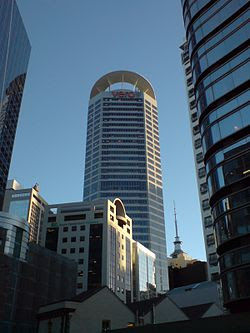 The Vero Centre (constructed as the Royal & SunAlliance Centre) is a high rise office tower located in Auckland, New Zealand. Constructed in 2000, it was Auckland's first major tower built since the 1980s. The Vero Centre, with its "halo" roof, was often recognizable downtown: Blue Bay Harbor,  Reefside, Newtech City, Briarwood, San Angeles , Ocean Bluff, Corinth  and the city samurai is in. 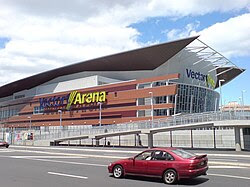 AH! Vecor Arena, now I'll know to call it something other than "The Mall were all the monsters go!"