Toei hinted upon shooting a Legacy War for the 20th anniversary of Power Rangers (not using pre-Zyuranger), here are who fans might want most to guest-star and how they can handle skipping over the pre-Zyuranger sentai. I already did a post on this and they don't have to get these actors, but these are the ones based on the Gokaiger episodes. An error happened and what I wrote got erased. 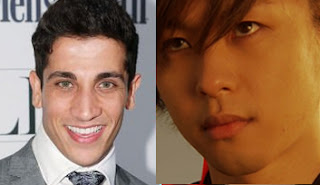 Atsushi Hashimoto appeared as Kai Ozu/MagiRed on Episode Three of Gokaiger. Firass Dirani played Nick on Mystic Force and I don't know where he is right now, but he is from Australia so depending on his schedule, it might be available for an episode. I think fans would want him back. 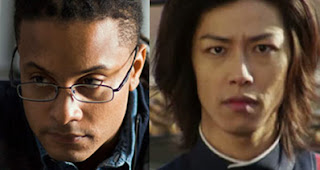 Ban/Deka Red appeared in Episode 5 and we also saw Doggy Krueger and Deka Yellow. Brandon Jay McLaren (Jack--pic from The Killing) is from Canada and so are Matt Austin (Bridge) and Chris Violette (Sky) and it depends on their schedules, they can get either one of them since they are set in the future and they can get anyone from the future. I am sure fans would want Matt Austin again. Or they could just bring John Tui back as Doggie. 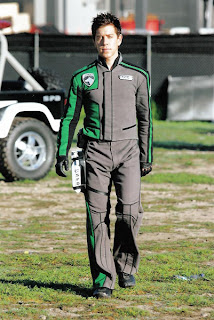 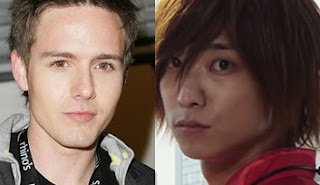 Jan/GekiRed appeared in Episode 7, Jason Smith is from Australia so it might be easy to get him back. Jan had a martial art training class, Casey could have the same. Fans on Rangerboard have expressed they would want R.J. (David DeLautour) back and I agree, he is charming and we could see Jungle Karma Pizza, which he owns, again. 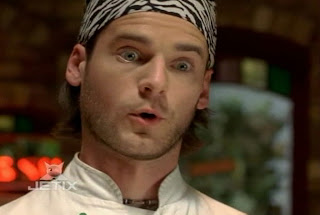 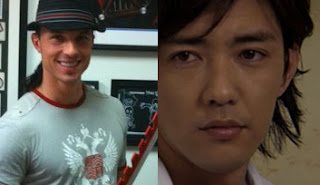 Kaneko Noboru/GaoRed appeared in Episode 9 and they shipped Rick Medina Jr. to New Zealand to be Deker for Samurai, so I'm sure he can be around for Cole. Gao Red had become a veterinarian and I guess Cole could be too. The Gokaiger had to find Anamaria and I am sure the Power Rangers can too. Fans would want him back. If he's busy, I am sure they could get Alyssa back or someone. 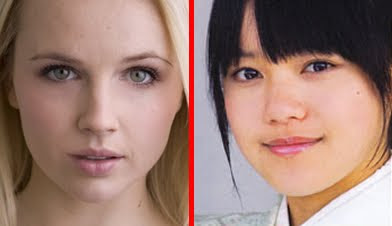 Karou Shiba/Shinken Red in Episodes 11 and 12, they don't have to get the female Red Ranger (Kimberely Crossman of Samurai) and they could get Alex Heartman (Jayden) back. But fans on Rangerboard have expressed they might want Hector David Jr. (Mike) back. 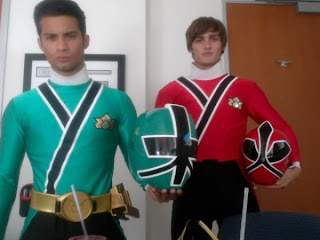 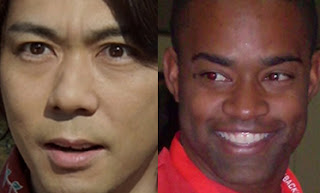 Episode 14 featured Red Racer of Carranger, T.J. is in America, they would have to ship him to New Zealand. They could use Tommy but maybe for another episode. And it doesn't have to be Red, since we don't see him transform, they could easily get Justin (Blake Foster). I am sure fans would want Blake Foster for a Turbo episode. Rumors are that Saban has contacted Blake to guest on Power Rangers Samurai. 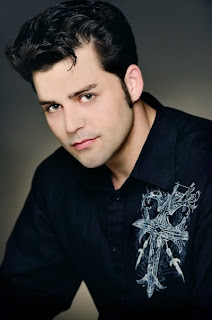 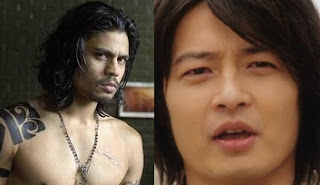 Episode 18 had Mikoto/AbareKiller appeared in a flashback along with in-suit Dragonranger and TimeFire who didn't speak. Since the counterparts White Ranger, Green Ranger and Qunatum Ranger
aren't dead, they might have to change the story. Jeffrey Parazzo (Trent--pic from Late Fragment) is from Canada, so they would have to fly him over too. They can't use the footage of Mikoto with the two in-suit Rangers, because of Mikoto and Gai but they could recreate it. They could bring Tommy (Jason David Frank) in and have White and Quantum in suits or a big get would be all three actors, two in United States (Daniel Southworth/Quantum) and one in Canada. I realize they need one of the three because of the Sixth Ranger Keys. Trent wasn't technically sixth, but the sake of this whole thing, yes. 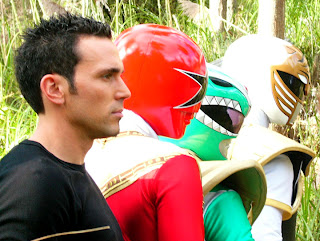 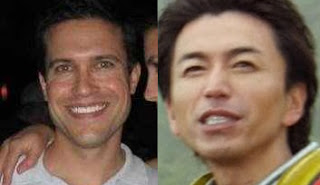 Episode 20 had not only GingaRed but Kuro Kishi/Hyuga. Word is that Danny Salvin/Red Lost Galaxy Ranger has stopped acting, so he might not want to do it. But they could get someone else or just leave in with Mike. The Gingaman are from the Ginga Forest, the Gokaiger had to go near there, but in the PR universe, Lost Galaxy are from way distant space. The new Rangers could either travel to Mirinoi or Leo and Mike can go to them. 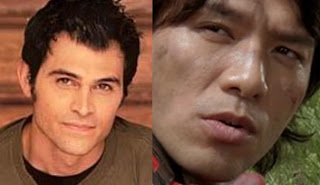 Hyuga was the main focus of the episode, they could get Russell Lawrence, who is American and they can have him travel from US to New Zealand. 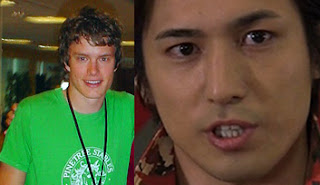 Episode 21 had Akashi/Bouken Red, since Mac/Red from Operation Overdrive is from Australia, they could easily get him. In Gokaiger, Akashi already gave them the powers in the 199 movie but most likely they will make the episode footage about the new Rangers earning the power from Mac after defeating a reincarnated Moltor. 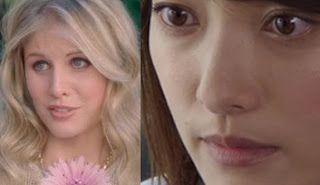 In Episode 23, we saw GoPink, in following tradition, they could get Dana/Lightspeed Pink. They would have to get her to travel. Go Pink is a ambulance nurse and last we saw Dana, she was a doctor so it goes hand and hand.

Episode 25 of Gokaiger features the three Hurricanger transforming, so the producers would have to get all 3 Ninja Storm actors or skip the two episodes. They all reside in New Zealand and Australia, so it might be easy to get them. 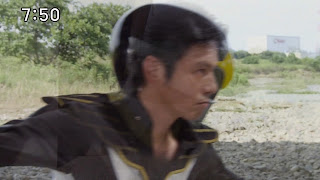 Gai/Black Condor from Jetman appears in Episode 28, Jetman was not adapted into Power Rangers---it was actually the series that aired before Zyuranger, the one that became MMPR. There would only be 4 episodes to skip (Liveman, Dairanger and Battle Fever J). Anyway, it is not uncommon for Power Ranger producers to skip Sentai episodes. 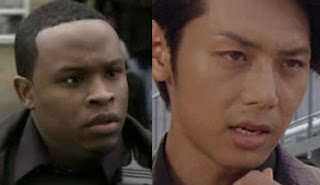 In Episode 29, we see AbareBlue and Emri a.k.a. AbarePink, but since there was no AbarePink in Power Rangers, I guess they can get Ethan, Blue Dino Ranger. Ethan's actor is North American so they would have to ship him over. Abare Blue came in to tell the Gokaiger of a power that AbareKiller didn't mention to combine both of their robots. Ethan can do the same. They might have to cut out the AbarePink stuff since it didn't exist in Dino Thunder (it existed in SPD). 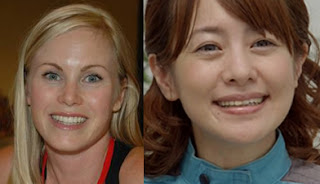 In Episode 31, OhPink and OhRed appear. I don't think most fans (some do) want Tommy for Red Zeo Ranger but we never know. They could bring both Tommy and Kat. Kat currently resides in the United States but she is from Australia, so I think she would be open to go to New Zealand, depending on her schedule. 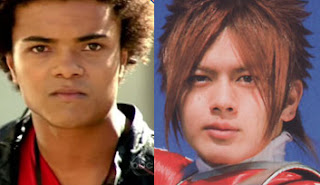 Episode 35 will have Sosuke/Go-On Red because the Mechafalcon and since they had a RPM-Samurai teamup in November 2011, they claimed the Ranger Red voice was someone else but fans are sure it is Eka Derville (above) so I am sure they can get him back. 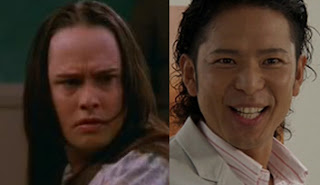 Kenta (Mega Red) appears in episode 39 and I would like to see Christopher K. Lee (above pic from That 70's Show in 2004) in his new Megaship being sidetracked by the pirated red ship zord. 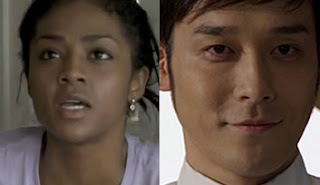 In Episode 40, Time Yellow cameos but even though I love Deborah Phillips (Katie), I think fans would like to see more Wes and Jen, their actors are still working. Jason Faunt (Wes) has expressed he loved his time as a Ranger. 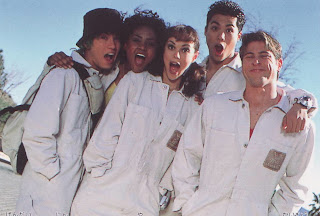 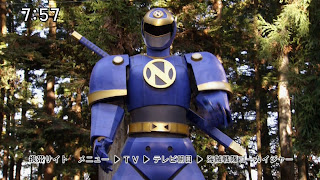 An error happened and what I wrote got erased. Ninjaman appears in episode 45 and probably going to stick around until the end. The Aquitar Rangers (based on Kakuranger) were vaguely connected to Ninjor and more connected to MMPR Season 3. So maybe they can split up the powers, one ep with Ninjor bestowing the MMPR's ninja powers and another with an Aquitar Ranger bestowing their powers. 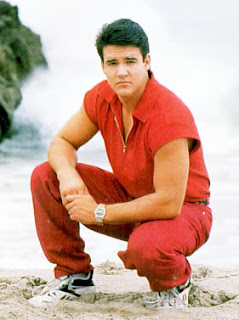 It would be great to have a MMPR tribute episode with Austin St. John.
Posted by Lavender Ranger at 12:45 PM

Me personally, although I would like to see Tommy in green and white ranger, I'd rather see him again in red ranger zeo.

For cons, I agree with RJ instead of Casey and Justin in place of TJ

They could use the power coins and say that each power coin was connected to there zord causing a new suit. The dino power coins use zyuranger suits, the thunderzords provide a whole diff power set which would be the dairanger suits, and the ninja coins are linked to the aquation rangers bc they used the ninja powers while they were on earth and they use the kakuranger suits. This can help tie up some loose ennds and we can get around the whole stock footage with those suits. Idk that's just my theory...

Personally I'd like to see what improvements they could make to the Aquitar make up.

In fact, it was not Dekared who had the Great power of Dekaranger was Dekamaster. So, in adapting PR, it would be the Shadow Ranger who has the power of the SPD

I know it was doggie.

It would be cool to see a Two Part MMPR Tribute where the Pirate Rangers team up with the Original Rangers. It probably wouldn't happen, but the line-up would be Jason, Zack, Billy, Aisha, Kimberly, and Tommy as the Green Ranger. Basco's American counterpart would kidnap Rocky, Adam, Katherine, and steal the White Ranger Key. He would summon them and force them to fight the other Rangers.

I want Gokaiger adaptation too
Btw, you've got helmetless red n green samurai ranger, from where you get it? please share with us if you have more :)

Helena, I got them from Hector David Jr.'s Twitter, check them out:

I'm actually wondering if the scene of Gai getting his powers might be completely reshot. As Tommy was the first (and second) 6th ranger, I personally think it would be cool if they had Green Ranger and White Ranger in their suits, and then Tommy out-of-suit to give him the powers, to represent two of his forms. They could still have him show up for Zeo or Dino Thunder, too...

Actually... since he is a teacher, using the Megaranger episode's plot for a Dino Thunder would work, too.

You should do a survey to find out which ranger you want to see as a guard in the adaptation of Gokaiger, for example, if it is not Kimberely Crossman for PR: Samurai, I prefer it to be Jayden (already I would have preferred Shikenred that Hime Shikenred in Gokaiger) or Anthonio (my favorite sixth ranger, which is still up for the hearing episode of PR: Samurai), but not Mike, although it is rare for a green ranger that I like while I do not like green (with Tommy, Damon and Joel).

Good idea lionel. Dessa, of course they gotta reshoot. It has 2 japanese guys in it.