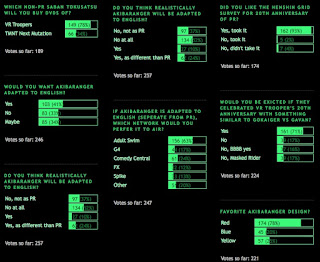 Did you like the Henshin Grid Survey for 20th anniversary of PR?

Would you be exicted if they celebrated VR Trooper's 20th anniversary with something similar to Gokaiger Vs Gavan?


Which non-PR Saban Tokusatsu will you buy DVDs of?

Would you want Akibaranger adapted to English?

Do you think realistically Akibaranger will be adapted to English?

If Akibaranger is adapted to English (Seperate from PR), which network would you perfer it to air?
Posted by Lavender Ranger at 8:17 AM