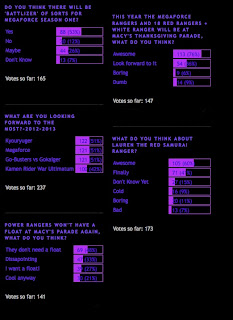 Do you think there will be 'Battlizer' of sorts for Megaforce season one?

Power Rangers won't have a float at Macy's Parade again, what do you think?

This year the Megaforce Rangers and 18 Red Rangers + White Ranger will be at Macy's Thanksgiving Parade, what do you think?

What do you think about Lauren the Red Samurai Ranger?
Posted by Lavender Ranger at 11:08 AM