UPDATED 1/25/13 8:15PM EST
So this has been spotted on eBay. Someone in the United Kingdom is selling this box. They say that it will be released in the UK on February 15th. Some people think it is fake. It has the six Rangers surrounding one mystery silhouetted figure and it says "7th Mystery Ranger." We first saw the same image and name used for the PMC exclusive and we all deduced it would be Lauren. It looks like a regular action figure box but with covering. I suppose that the action figure is Lauren, hidden. This is awesome. I am sure this will turn up in the United States. It is just a hunch. Like Linear Ranger said before, it might turn up at Ross or Walgreens or something.


UPDATE:
@razzle1337 spoke to the seller of the product and he says it is from a wholesaler toys website (http://www.toymastershop.co.uk/) and that is the picture they supplied him. 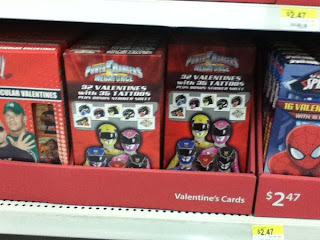 So a few days ago, I reported about the Super Samurai Valentines but thought it was the only one for this year. But apparently Megaforce has been found out! https://twitter.com/PR_Media_Info found these in Wal-Mart. This adds one more notch to my chart in thinking that the suits will change in Super Megaforce.

Seems fishy to me. Why would the figure be covered up? Lauren's been common knowlage for six months.

But if it is legit, I'm glad it's come to the UK, 'cos I've been worrying that it wouldn't.