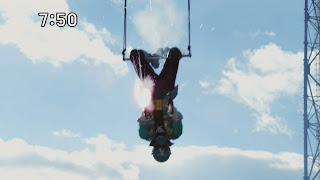 I just did a post on stunt people and now news from the Power Rangers stunt people. This is from the suit actor and stunt Namihei Koshige, stunt and choreographer with minor details on Super Megaforce. Namihei has played mainly female characters since season 2 or so like the White Aquitar Ranger, Pink Lightspeed Ranger, Pink Time Force Ranger, Yellow Dino Ranger, Pink SPD Ranger, Pink Samurai Ranger and much more.

.@SilurianRanger on Twitter helped translate the important parts:
"Next week stunt team will be receiving scripts. He states that the stunt team will be using the plot in these scripts to enhance fight scenes, and characterizations. There will be more rehearsals than normal to perfect this, then the cast will join to learn this new fighting style.

The more spoiler filled segment in the final paragraph comes from the segment before the URL, and the video itself. He says, "It will go from ray-guns and colored weapons to a mix of sword and gun fighting." I suspect that this is leading to Gokaiger adaptation. If you then watch the video you can see where I think this is the case. The stunt team will use props for practice next week, as in the past." 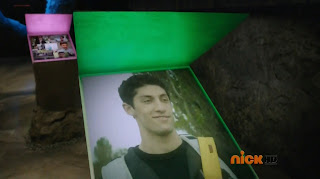 More evidence I think that Gokaiger suits will be used and that Jake will become the Green Ranger is that one of the consoles are green. The above picture is from www.megaforcecast.com and it is from the first episode "Mega Mission." Yes, that is a clip of Jake with Gia's bookbag from Episode 2 used in Episode 1. Some say that maybe green light is better than black, but it could had been purple. They did use purple in the footage when he morphs and the snake attacks and also Black Ranger had purple lights in his Mammoth zord in the first season. 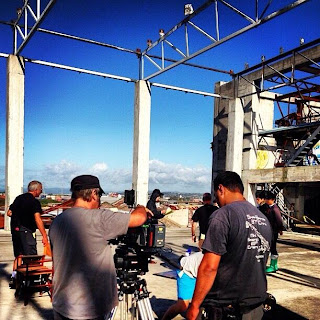 Dark Wish of Rangercrew found this pic from a crewmember on Instagram and won't say who it is but on the right side, we see a stunt guy in black with green boots. It looks like a Gokaiger set but if you look carefully the crewmembers are more diverse and the majority of Sentai crew are Japanese so this has to be Power Rangers. This has already started controversy among fans because Ciara Hanna (Gia) has posted a pic of her in her Megaforce (Goseiger) costume but it could had just been an early scene from season 2. Season 2 started shooting last week.

Ciara Hana tweets:
don't read into things ranger-peeps! "all shall be revieled in time" 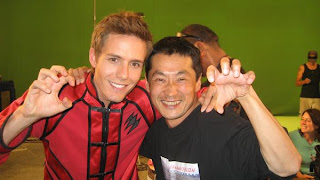 (Above is Jason Smith and Koichi Sakamoto)
She also tweeted one among the lines of "In the jungle, the mighty jungle the tiger sleeps tonight" but she deleted it. She has been seen tweeting to Jason Smith (Casey of Jungle Fury) and people are suspecting he will be a guest star in season two.

Another explanation for the green light is black light would look silly but there is a point.

Well, they used purple light for the Black Ranger in his zord back in the day.