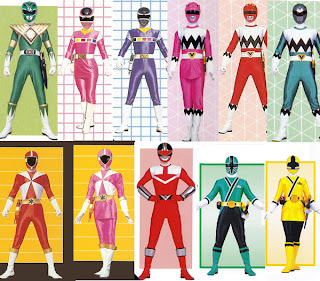 Might contain Spoilers.
Some might not care what I think about what I am about to talk about.  Believe it or not, some do. Some have asked me.

From Fury Diamond I knew 10 former Rangers were returning to shoot at the end of May for Super Megaforce. Now we find out it is 11. I thought it was just going to be the powerless veterans getting their powers back in Ranger Keys at the end of Super Megaforce like the last episode of Gokaiger. Now they are filming the former Rangers in their suits and helmets with suit actors behind them. It looks like the Legend War but it could also be them getting their powers back at the end or maybe a tv special like 'Once A Ranger'. So I have no idea what it will be.

One thing is for sure is that Saban Brands asked Power Force to supply 3 questions each for the veteran rangers. But there was a time limit and many of us were busy. I was able to send in my questions in time. We haven't heard anything yet as I write this but I guess we will be getting a video Q& A like the ones the Megaforce cast have been doing on the Power Rangers YouTube. I might be wrong. But why else they had us do questions? When we inquired to who the former actors would be, they said they didn't even know. And I know idea when its happening. 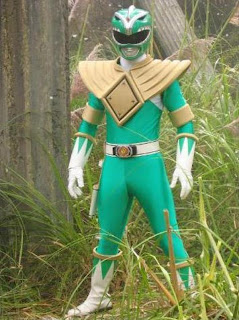 Green Ranger Suit
I am not so happy about the "Fighting Spirit" suit being used. Not many fans either. In the picture of Jason David Frank on the Super Megaforce set has him with the silver streak helmet and silver morpher. It was made by a company for Disney and Saban got it, Saban has been using it for theMMPR Box Set and promos. JDF actually tried to get them to change them but he says that no one listened. One in-show explanation I can think of is that in Fighting Spirit, the Green Ranger from Tommy's coma dream came to the physical world when his powers were restored for the dream. 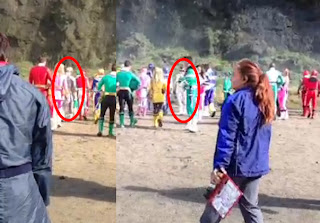 Titanium Ranger
FuryDiamond said that Titanium Ranger and the Spirit Rangers will not be used in Super Megaforce. And now we see the suit in what fans call "Super Mega War" because JDF called it the 'Mega War.' It is still unknown if this is the equivalent to the Legend War and if it will be at the end of season 1 or 2. I don't know what I think yet. 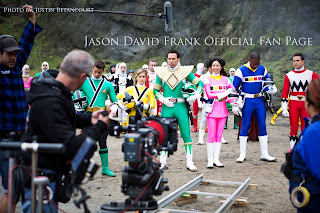 Legend War or Super Megaforce finale?
And what has me worried is that if this is the Legend War or not. Because Magna Defender (behind TJ) is present, and in the Legend War in Gokaiger, he was with 9 other Extra Heroes, not among the other Rangers. So maybe they will change it. Don't Know, but it is interesting. I thought it was worth mentioning.

Turbo/Space
As I mention before, if Kat, Rocky, Adam, and Tanya are being Zeo and Cassie, TJ, Ashley and Carlos are being Space, there would be only one Turbo Ranger---Justin. Also if Tommy is being Green and White, I guess there is no Zeo Red, or Black Dino. We see Zeo Green in the vine video recently. Also what has me concerned is that select teams are seen, there are some teams missing. I've seen MMPR, Zeo, Turbo, Space, Lost Galaxy, Lightspeed, Time Force, Ninja Storm, Dino Thunder, SPD, Operation Overdrive and Samurai. Missing are Aquitar, Wild Force, Mystic Force, Jungle Fury and RPM. And those are curious omits. Aquitar is understandable as they are forgettable. MF, JF and RPM are Disney, but WF is an inbetweener and if NS is there, why not WF? I mean, Rick Medina was in both Samurai and Wild Force. And RPM was in Samurai. Maybe they have them there and we didn't see them. We have around 25 or so Rangers at the set, it should be over 100.

there so maybe I am just overreacting.

I hope Tommy(Jason) is the leader among the returning rangers!

Oh man these signs means that cancellation is on its way.

And it begins. Same shit fans said with gokaiger. Just bc we see past rangers, doesn't mean its the end.

Jason David Frank actually made a comment on TMZ that both the Green and White Rangers were going to make an appearance. Is it possible that he'll be able to switch between them because they use the same Morpher? If that is true, then this might be from the Legends War and this will introduce the concept of changing into different Rangers.