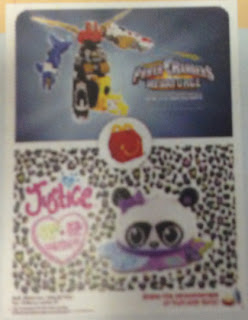 Thanks to my buddy and fellow Power Force member MorphinLegacy who posted this on his blog. The picture is actually from blinddrummer15 of Rangerboard. The date has yet to be revealed but since last year it came at the end of August and the year before in September, this might be in August. Right now they got Despicable Me 2 and next is Smurfs 2 but maybe PR is after Smurfs 2. They toys are six Mechazords: Dragon, Phoenix, Shark, Snake, Tiger and Lion to form a Megazord. The Robo Knight's Lion takes the middle. I thought they would release exclusive cards but I guess they are not. The girl toy I have no idea what it is. It looks like its called Justice something and it is also something that comes in parts to combine.
Posted by Lavender Ranger at 5:42 PM

I don't know what the toy is, but Justice (with that logo) is a shop I've seen in malls.

Looks like I'll be swinging by Mcds everyday during the promotion and try to obtain 2 Gosei Greats.

Won't touch the food though since I swore off the stuff.